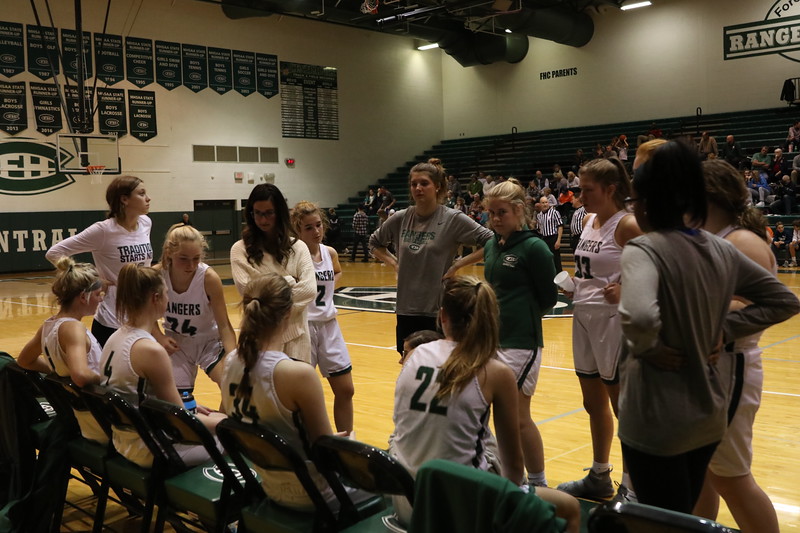 Coming off another conference win against Lowell Friday night, the girls varsity basketball team took its hot streak into a home game against the Ottawa Hills Bengals. Despite a slow start, the girls were able to get the win convincingly 69-20. A wide variety of scorers helped FHC claim another win in the OK White. Sophomore Theryn Hallock, junior Zoe Lipke, and senior Ally Ringler continue to be offensive catalysts for FHC, providing the bulk of the offense in this game.

The first half was a slow start on defense, as the Rangers struggled to rebound the ball and finish defensive possessions. The Bengals were able to stay in the game at the beginning thanks to getting extra possessions. Theryn was able to carve through the Bengal defense and find playmakers like Zoe, Ally, and Katy who were able to knock down big shots to open the lead up later in the first half.

The team was able to get some fresh legs towards the end of the game, and the team didn’t miss a beat. Freshman Delaney Smith was able to produce off the bench, as she shot the ball extremely well and was able to make great passes to get her teammates open shots. The clock expired and the Rangers took a big win 69-20.

This win puts FHC at 13-5 on the season and an improved 9-1 in the OK White conference. The Rangers now focus on their biggest game of the season to date— a rematch with the rival Forest Hills Northern Huskies. Major conference implications are on the line in this one, as the two teams are tied at 9-1 in conference play.

Rebounding will play a vital role in this game, as FHC was dominated on the boards the last time these two teams met. The Rangers will also need to be smart with the basketball and limit turnovers against a very gritty Husky defense. If the FHC can start the game out strong and finish plays on defense, look for the Rangers to pick up a quality win at FHN.