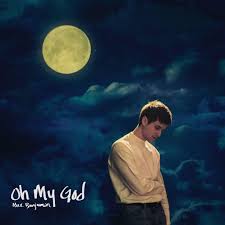 Alec Benjamin is a storyteller.

It’s always been the number one reason I listen to his music.

His voice is melodic. His tunes are catchy. His composition is incomparable.

But it’s his stories—his stories are what makes his music so utterly devastating.

And that was my opinion even before I was old enough to identify with the stories he was telling. When I first started walking through his stories with him, the path I was on was perpendicular to that of his music. Now, however, his stories are mine. The stories Benjamin tells are stories for me—my generation. Stories of pain, mental health, inner demons, and ultimately, hope—precious, priceless, slightly precarious hope.

With the release of three new songs the day before Valentine’s Day, Alec weaves a story not of commercialized, regurgitated love but of real, raw emotion.

His story begins with “Oh My God.” The title for this EP.

In “Oh My God,” Benjamin instantly dives into the story, not holding anything back as he expresses his feelings of distance from himself. His own image is completely unrecognizable; a stranger fills the frames gracing his walls. As he builds to the chorus, he continues his description of the way it feels to lose yourself, the way the oxygen rips itself out of you.

And then the chorus hits.

“Oh my god/I can’t remember/who I was/ just last December.”

It took a minute for the words to resonate. The lyric was at such utter odds from the feeling of the song. But once they slipped past the chipper beat of the song, I understood. Benjamin’s story was one I felt we shared. My generation is growing up in a world that changes almost as quickly as we do. His gift to us all, a shared story, is a link we could all grasp on to and a reminder that we aren’t alone, even as we lose ourselves.

The juxtaposition of the quick sound and the lyrics were an artful choice by Benjamin. He strategically covered his heavy words with a light layer of carefree snapping to make a statement about the facade we put on when faced with losing ourselves.

The first line of the next song, “Demons,” didn’t initially remind me of a love song. So, when Benjamin began to hum about a savior love—the kind of one-sided love found in damsel-in-distress fairytales, I was a bit put off. In his beautifully flowing way, he sang, “You’re the only one that gave me hope / You’re the only one who really knows.”

The song was typical captivating Benjamin; I just was so caught off guard by his longing after a love that supposedly saved him. I guess, after my own personal experiences, the idea of a savior love was what really confused me. It was then that I realized that maybe, for once, I was reading too much into his stories. So I laid down in the winding river of his words and let him pull me through a story that was uniquely his. And, I’ll admit, it was so nice to relax into his sound and forget the words for once. A break for my speeding mind.

After I listened to “Demons”—the right way—for maybe the third time, my playlist threw me recklessly into Benjamin’s third and final song. I was not prepared. “Mind Is A Prison” ripped at me in the way only an abstract mental health song can. The lyrics, “I’m just a tenant paying rent inside this body and / I got two windows and I call them my eyes,” created an image I didn’t even realize I needed in my life. We really are simply renting space in our bodies, watching through the windows of our eyes from the cells of our minds.

It may be Benjamin’s captivating stories that I adore the most about his music, but I would listen just for his voice. Something about the way Benjamin sings—the low tenor of his voice, the humming, the soothing vocals that accompany his words—captures me in a warm trance. His voice twines to weave a story warm like the beauty that draws insects to lights. A soft glow that traps them forever in a tantalizing trance.

These stories that Benjamin writes and the sound he personifies are depicted gracefully in the music videos he released to go along with two of the three songs. The videos not only artfully bring his stories to life, but they also give a look into how Benjamin himself interprets his stories.

For the “Oh My God” music video, an older man can be seen living the life of a celebrity: fast-paced, sought after, and all alone. This snippet of the older man’s life is juxtaposed with shots of Benjamin soulfully singing his song. Once the feeling of the older man is truly grasped, he looks up, and as Benjamin hums in the background, the old man sees Benjamin’s reflection in the mirror instead of his own. And if that doesn’t do it for you, the majority of the remaining time is a shot of the older man and Benjamin overlapping; Benjamin is the older man, and the younger one: lost.

In the “Mind Is A Prison” music video, Benjamin spends the majority of the video in a slowly filling fish tank. I love how Benjamin uses metaphors not only in his songs but also in his music videos. And the metaphors aren’t even the same. Although his music doesn’t depict the same image as he shows in the music video, the new metaphor simplifies the feeling Benjamin is trying to express with his music: a feeling of being whole trapped in your mind, and other’s ideas about your mental state.

Although “Demons” doesn’t have a music video, the lyric video gives us a singular image: Benjamin holding a fuzzy red demon close to his side in the dark. Hopefully, a music video will follow soon to explain that image.

With Benjamin’s storytelling ability, delectable voice, and artful illustrations of his music, I have no doubt that his music will cross borders and boundaries to bring people together under his unifying stories.