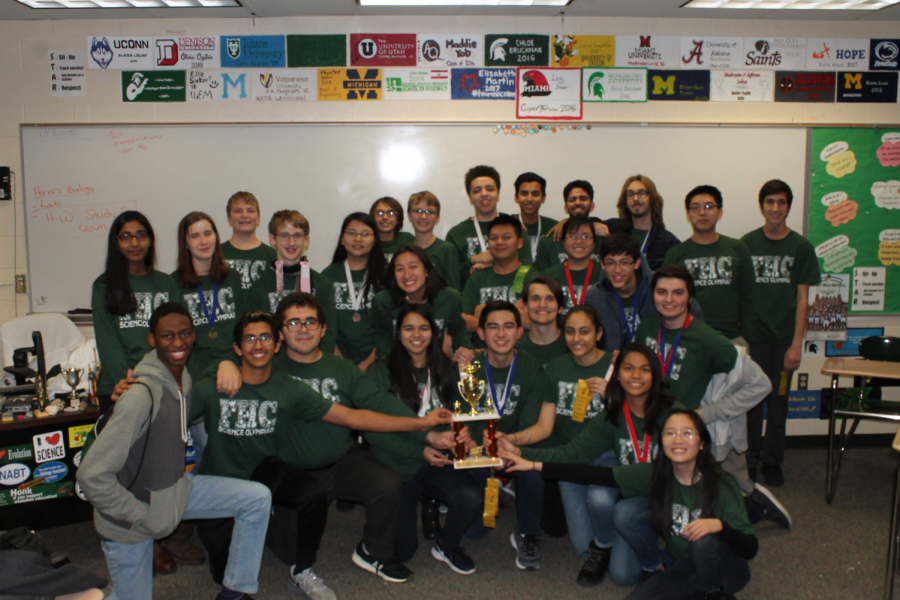 Science Olympiad is a team of high school students that attend FHC, and within this team, people are split up into pairs or groups of threes and are assigned a topic. This topic is anything science-related, anywhere from the study of birds to building a plane out of wood.

While science is a class all students need to take for at least three years to be able to graduate, some students enjoy diving deeper and learning new things that high schools do not normally teach.

Recently, FHC’s Science Olympiad team went to Allendale for an invitational competition to compete in all areas of science.

Suchir started participating in Science Olympiad in seventh grade but quickly dropped out because of his lack of interest, but as he graduated from middle school he realized what he was missing.

“My favorite part of Science Olympiad is the team aspect,” Suchir said, “going to invitationals with the team is a blast. We spend a lot of time together: bus rides there and back, getting food, and being together during our off times during the competitions.”

While students take the time to learn new areas of science and grow in their learning, they also will build community within the students that are interested in science.

The teams are split into smaller groups to compete in individual events, and while that can seem to separate the team, the team actually grows their bonds stronger as their partners switch around and even the events they partake in, giving the students a vast variety of knowledge.

FHC’s Science Olympiad ranked very well considering the number of schools that attended the Allendale invitational. But with a great win, that means you have to work hard to get there.

“It is up to you how much you practice,” Suchir said. “But there are weekly meetings that members are supposed to go to every Thursday. During practice, we talk about general strategy, what we are looking for in different events, and how we should best prepare.”

Just like Suchir, senior Tony DiMeglio specializes in certain events, but Tony only partook in three this past weekend. These three events include ornithology, fossils, and geologic mapping.

Tony realizes that this is his last year for participating in invitationals but also being a part of Science Olympiad, so with each of the three invitationals this year he does his best in each event.

“This Allendale invitational tends to be very representative of our region as a whole,” Tony said. “It was a very competitive time. Typically, we do really well at this invitational, but this year, there was a lot more tension and fear because of our tough competitors.”

As Tony completed his last invitational, he has something else to look forward to: the regional competition coming up in March. And while the team received a great ranking, it doesn’t mean much to their overall goal.

Not everyone is chosen to go to the regional competition, but for the invitationals, there is a spot for everyone on the team. FHC’s teams consist of all grades, and it does not matter how much scientific experience you have.

So, while not every science class is for everyone, there are more doors of opportunity opened for those who join Science Olympiad; there is so much more to learn than usually taught in a classroom setting.

Senior Akansha Das enjoys getting to explore topics—such as protein modeling, disease detectives, anatomy and physiology, and experimental design—more in-depth than in her usual classroom setting; it is one of her favorite things about Science Olympiad, other than winning.

“It is always such a prideful feeling when Forest Hills Central Green is called at an awards ceremony,” Akansha said. “Our team is so wonderfully quirky, so before every event that is announced, we continually [pat the back of the] person competing in that event.”

But now that FHC’s team has won, Akansha sees the win as encouraging but also something that shows space where the team really needs to work to “really try to strengthen the weaknesses.” And although this is Akansha’s last year on the Science Olympiad team, she encourages others to join next year to get the same experience she did.

“Totally come and join,” Akansha said, “It’s super fun and super encouraging. You’re going to learn not just about science but about how to study, how to work in groups, and a lot of other really important skills. Science Olympiad is such a good mix of fun and studying. It’s definitely something everyone should try.”

Overall, the Science Olympiad team did an amazing job at the Allendale invitational, and they are optimistic about their future in the regional competition coming up.

“I was impressed with everyone on the team,” Tony said. “I felt like the work we put in really showed at this competition. I’m really sad that this is my last year and last invitational; I hope we continue this streak into our regional competition.”