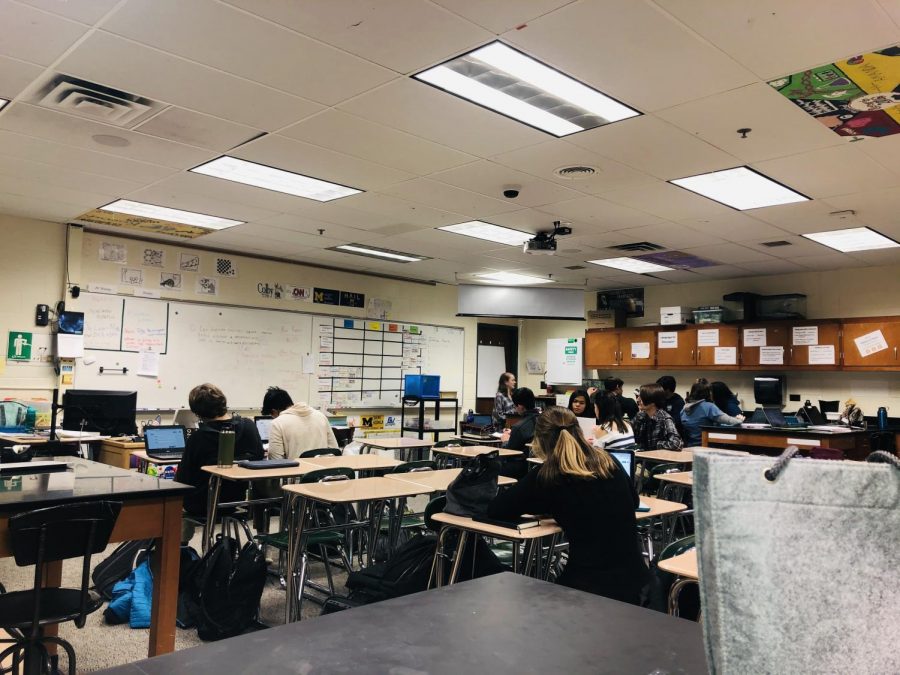 For the last few years, students have been granted the gift of an extra hour of sleep every other Wednesday. However, students aren’t the only ones who benefit from the hour delays—teachers, like English teacher Lisa Penninga, are allotted the time they need to collaborate and connect with their departments.

“On hour delays, [English teachers] collaborate as an English department,” Penninga said. “We get to make a lot of pretty amazing decisions for our department by just having that one hour.”

Before hour delays, teachers were faced with the challenge of trying to coordinate their schedules so that they could find some time to discuss things with each other.

However, Principal Steve Passinault took notice of the problem and began his search for a solution.

Another inspiration for the hour delays came from training teachers and staff went through known as ‘Professional Learning Communities.’

“We had just gone through some training as a staff on something called ‘professional learning communities’ or ‘PLC’s’ which is focused around teachers working together and collaborating and that kind of thing,” Passinault said. “Teachers thought it was great, but they were also wondering when they would have time to do it, so then the hour delays came as a type of solution to that.”

Out of the Forest Hills schools, FHC and FHE both have hour delays now. And, it’s seemed to be a very beneficial addition to the calendars. However, only the high schools are granted the gift of an extra hour. This is because most of the younger schools have time for teachers to collaborate that high school schedules don’t allow for.

“At schools like the elementary schools, a lot of the teachers have similar breaks, planning periods,” Passinault said. “However, when it comes to high school, teachers usually have different free hours and schedules, which doesn’t allow them time to collaborate.”

While the hour delays are nice for students who get to get an extra hour of sleep, it’s proven to be the most beneficial to teachers who now are offered time to collaborate over their classes with other teachers in their departments.

“The hour delays allow all of the teachers to talk about how each of their classes is going,” Passinault said. “The extra time allows them to talk about how they are teaching things, how students are doing in their classes, and what they could change. It also gives them the time to ask each other questions that they need to ask.”

Without hour delays, teachers didn’t have much time to discuss with one another. Now, departments have that time every other week to catch up and talk about the things they need to discuss.

For the English department, the delays have been very beneficial.

“[The English department] usually talks about our current curriculum, things we want to change, and new ideas for certain things that we can implement into each of our classrooms,” Penninga said.

Not only is it beneficial in just the classroom, but it also gives teachers a time where they can all see each other, which they often don’t have time for in the regular school day.

“Personally for me, hour delays are nice because we don’t really see each other that often because we all have our own little ‘bubbles’ or ‘blocks,’ and we get to on hour delay days,” Penninga said. “We see our students every day, but not usually each other so it’s nice to have that time to reconnect and catch up.”

So, while students are enjoying their extra sleep, their English teachers are working with one another to make their classes the best they can be as well as getting the time they need to connect.

One thing you can count on the English department not doing is wasting the time they are allotted on hour delay days.

“Hour delays, kind of like life, can be whatever you make of them,” Penninga said. “You can choose to take advantage of the time, and you waste it. I think the English department does a really good job of really using the time to build up the department and even just each other.”

The math department also makes sure to take advantage of every hour delay they get. All of the math teachers usually meet up and collaborate over what they are teaching, how it is going over in their classes, and plans for the future.

“[Hour delays] give teachers the time to talk that they need,” math teacher Rosemarie Whalen said. “We can plan ahead and put together lessons, we can talk about how to help certain kids that are struggling, and we can just become more connected as a math department.”

The hour delays give the math teachers the time they need to build their department up. They serve as a beneficial platform to cover things that are necessary for the benefit of students in classrooms.

However, the delay days can sometimes get stressful when a teacher has a lot to cover.

“Sometimes, I can’t wait for the hour delays because we have so much to talk about,” Whalen said. “However, sometimes when I have a lot to get through in certain classes it can become a lot.”

In the end, even with the challenges that teachers like Mrs. Whalen face, having the hour delays makes a very positive impact in the classrooms of FHC.

Science teacher Chad Scholten agrees with Whalen on the matter of hour delays—it simply gives teachers the time they need.

“[Hour delays] give teachers a chance to meet with other teachers, which most of us don’t have time for on our own,” Scholten said. “The delays make it so we don’t have to stay super late after school or come in super early, and it gives all the teachers in each department an opportunity to collaborate.”

Scholten, while finding that the delays are very beneficial, finds that FHC offers the perfect amount of them.

“I think delays are definitely something to continue,” Scholten said. “Everyone likes them, and it’s really nice for teachers to have that time for whatever use they need it as. However, I don’t think we need more [hour delays]. Once every two weeks seems to be a good amount—no more are needed, and no less.”

However, some teachers wouldn’t mind having more of them.

Penninga is one of the teachers who believes having the Wednesday hour delays every week would be a positive improvement. So many beneficial things happen in the time every other week, and she believes with more time will come a better classroom and education for students.

“I think students really benefit from the extra hour of sleep, and I don’t see a huge difference in my balance of time when our classes are shorter on those days,” Penninga said.

Regardless of how often they occur, both staff and students are very happy to have them. They have proven to be positive in several different ways.

The only negative side to hour delays is for teachers who don’t have a department with a bunch of teachers, such as elective teachers. However, the time still can be used to its benefit in terms of grading and lesson planning, and sometimes teachers are able to communicate with teachers from another school.

“There are some challenges that come along with the hour delays,” Passinault said. “Some teachers don’t have a bunch of other teachers in their department to collaborate with. However, we’ve tried to work it out so that some of those teachers from FHC and from Eastern can collaborate so that the delays are still serving a benefit.”

Another challenge that could’ve been brought about by the hour delays was the overall year schedule. However, this was a challenge that was avoided for FHC due to the amount of time spent in school in our regular school year.

“The state mandates that school extends for a certain amount of time,” Passinault said. “They actually have it down to the minute, so we had to evaluate our time and see if we met the standards. We were so far over the minimum requirement of minutes that we actually didn’t have to change anything about our schedule.”

The hour delays have been going on for several years now, and they have proved to positively impact the school. Teachers, staff, and students all find their own benefits to the delays, and they are a nice addition to every other Wednesday.

And, overall, the hour delays and all the aspects of them root to one similar concept: the benefit of the students.

“I find that because teachers are allowed that extra time to collaborate and work with one another, the students are ultimately the people who benefit most from hour delays,” Passinault said. “The decisions teachers make while collaborating on the delays end up benefiting students and making it so they can be more successful in their classes.”