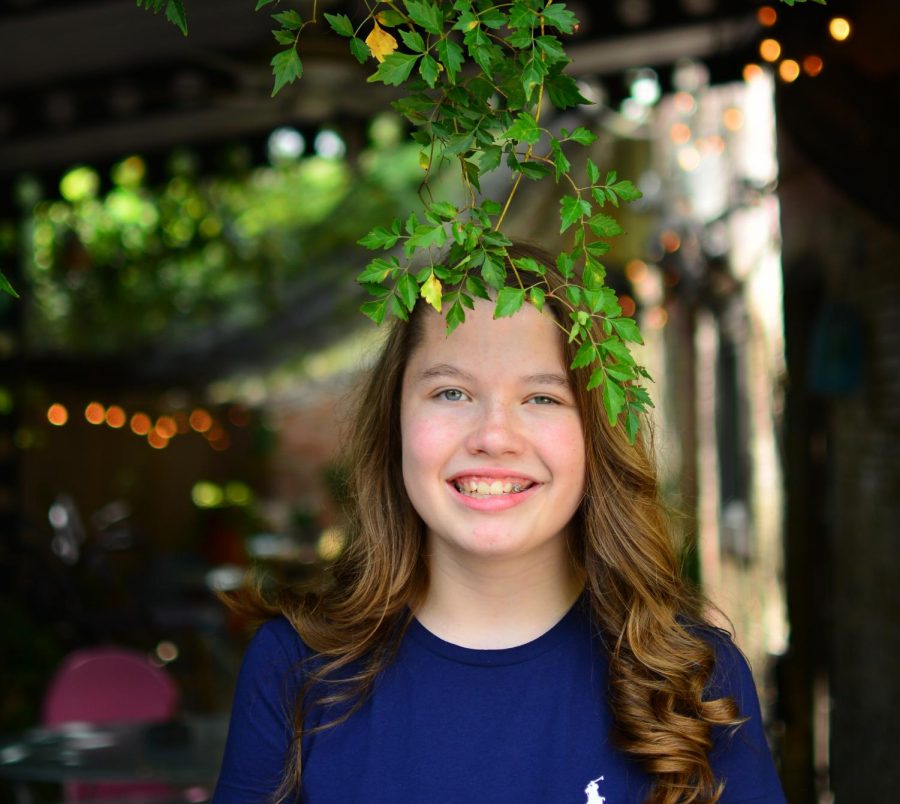 Junior Sarah Logan wants to see and do everything.

Having lived in Nebraska, Belgium, Germany, and Texas, Sarah got a taste for travel that has placed “everywhere” firmly on her bucket list. These amazing cultural experiences that cultivated this desire for travel were gifted to her by her parents’ work in the military.

Throughout much of her early childhood, Sarah was a typical military child, though the Logan family refused to live on base. At the age of two, Sarah’s father got a military desk job that provided Sarah the chance to immerse herself in the culture of Belgium.

“Belgium was really unique because we went to a local school,” Sarah said. “So, we all learned to speak French, and it was really hard because for like two months I just didn’t speak because I didn’t know what they were saying.”

However, now, years later, Sarah is back where she started: completely clueless about the French language. Given the chance and the time, Sarah would love to relearn the language and is currently working towards that goal through FHC’s French program.

As hard is it is to become fluent in one language, Sarah’s ambitions don’t stop there.

“It made me have a love for languages and makes me want to learn more languages,” said Sarah about her time in Belgium and her previous fluency. “It would be really cool to know a bunch of languages. I can understand German, but I could never speak it.”

Sarah attributes this partial fluency to the comparatively short duration of her stay in Germany and her attendance at an international school.

Despite being surrounded by other Americans and Canadians and speaking English at school, Sarah still had a chance to experience the local color of Germany. And what she found was not the stereotype in the slightest.

“In Germany, it just different being there because you’re very close to a lot of people,” Sarah said. “I just felt like we were really close with all of our neighbors, and there’s just so much to do locally that it was just a really good community, at least where I lived.”

But Sarah also made another observation, one that taught her a life lesson she now tries to embody.

“Their views were more abroad because they lived overseas,” said Sarah regarding the people in Germany. “I feel like I have a broader view of life, and I’m not just in a bowl. I feel like a lot of people who live in America live in their town, and they don’t realize that there’s so much more to see and do and learn and that people are very different.”

Learning about all these different people is something Sarah loves. In fact, given the chance, she would love to live in a different country such as Switzerland.

“I really like Switzerland because I like the mountains, and it’s really nice weather,” Sarah said. “I think it’s because of living overseas, but I really like being outdoors. So [I’d want to live] anywhere in Europe. But, I haven’t been to  South America or Asia or Africa, and I’d really like to go there, and maybe I would consider living there.”

Like how her outlook on life formed because of her time overseas thanks to both her parents’ involvement in the military, Sarah’s wanderlust and free-spiritedness did too.

Sarah’s father went to the Air Force Academy, which enforced a high level of strictness and discipline. Because of how greatly the academy changed him for the better, those same elements have carried over into the way both Sarah’s father and mother parent as they want to do what is best for their kids.

Rather than infusing those values into Sarah, her free-spiritedness grew instead and turned her into the laid-back and accepting person she is now. Having this order in one aspect of her life has allowed her to be more carefree in others.

“The one thing I care about is other people and their happiness,” Sarah said. “I don’t care about my happiness or anything else, but it’s not like a bad thing. I care about being—doing—what I want and having fun as opposed to like grades.”

But, as with her cultural explorations overseas, her parent’s strictness has allowed the fomentation of a new perspective of others around her and helped her develop into a very accepting person.

Altogether, Sarah owes a lot of who she is to her parents and the nontraditional way she was brought up.

“Through all of my are opportunities throughout my life and rigid parenting, I have been shaped into the person who I am—here to have a good time and to help others along the way,” Sarah said.