Dance team ends another phenomenal season and places at nationals 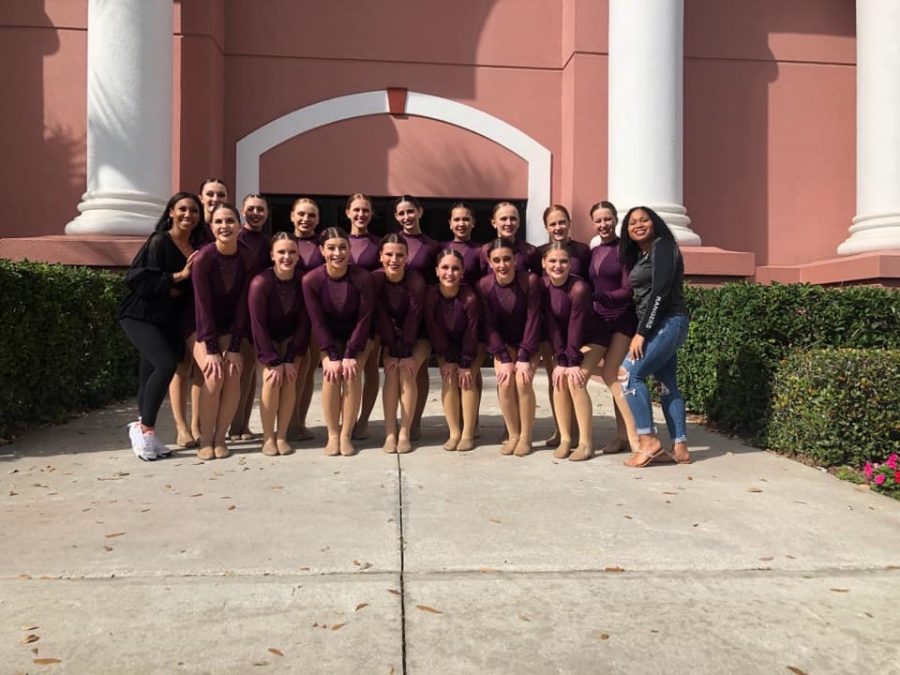 Senior captains Courtney Collar and Joelie Havey were able to help the dance team greatly improve their placings in Orlando during the DTU National Championship. The dancers’ performance was outstanding and allowed them to compete in the finals in each of their three categories.

Despite being faced with the fiercest competition from around the country, the girls were able to place top 15 in jazz, hip-hop, and pom. This was a huge improvement from last year when they were only able to place in the top 20 with their jazz dance.

“Last year was incredible. To place 17th with one of our dances was crazy,” Courtney said. “I had no idea how we did it, but I knew we all wanted it so badly. To final with not one, not two, but all three dances were more than we even thought to hope for, to work for. On top of that, we broke the top ten with one of our dances. We put so much time and effort, blood and sweat, into our pieces, and I am beyond happy that it paid off.”

This year, however, the finals resulted in the girls placing 15th in jazz, 11th in pom, and an excellent 9th place finish in the hip-hop category.

Joelie agreed and echoed the sentiment.

“Despite our initial disadvantage, our placement at nationals completely surpassed my expectations,” Joelie said. ” All around placement has never been done in FHC history. Talk about going out with a bang. Our entire team was elated, but only Courtney and I truly understood the significance of this outcome.”

This year, the team was composed of a few veterans, but the majority of the team was rookies. They had never competed on the dance team, let alone face the pressures of the nationals stage. Yet, both Courtney and Joelie could not be prouder of the way the team came together and pulled through for their last performances.

“This season could have been average,” Joelie said. “It could have been forgettable, but as a team, we decided it would be different. The improvement I saw in every one of our dancers was incredible. I am most proud of our growth and unbreakable unity. We learned to trust one another. We danced as one on the DTU stage. It made the long brutal practices, the early mornings, and occasional tears more than worth it. I love FHC dance team.”

Throughout the season, the dance team was only given a handful of opportunities to compete against other programs. However, the team was able to out-perform nearly every other squad they faced.

At the Davenport invitational tournament, FHC did exceptionally well; they placed top five in each of their three dances. Despite facing some of the best programs in the entire state such as East Kentwood and Grandville, FHC placed first in the pom category by beating out Rockford as well as Holly. They placed second in the hip-hop category just behind East Kentwood and once again ahead of Holly. Lastly, the girls were able to place fourth in the jazz category, missing third place barely; there was only a one-point difference. Grandville was awarded first in jazz, second went to Rockford, and third was awarded to East Kentwood with a score of 206. FHC finished in fourth with a score of 205.

“Davenport being our first competition of the season, I feel like our placing was very deserved,” sophomore Avery Jordan said. “The previous Friday night we had just finished learning our jazz dance after the basketball games, so 4th place was actually quite surprising considering we had learned it just two days prior. We won with pom, so that felt amazing, and we also placed 2nd in hip hop. Right off the bat, I knew this new team was special.”

At St. Johns, the girls were given an opportunity to test their talent against some very high-quality teams. The previous year, FHC was able to take home the grand champion award for placing first in nearly every dance. Unfortunately, this year the girls weren’t able to place as well as they had hoped. This was with the exception of the hip-hop category in which they placed first.

“The team had great performances at St. John’s,” head coach Jazzae Ford said. “Overall, our scores weren’t as high as we hoped for, but everyone walked off the floor proud of their performances and the team took home a first-place overall win in hip hop for the first time. St. John’s was our last competition before we headed to Orlando for nationals, and I think it was a great way to wrap up the season regionally.”

The FHC dance team continues to be a program known for its excellence and consistency. They had an overall successful year and were able to make their mark on a national scale for the second year in a row. Coach Ford has high expectations for next year’s team and has nothing but optimism for the future years of FHC dance.

“I’m so incredibly proud of this team for killing it at DTU nationals,” coach Ford said. “These dancers made it to the finals in all three dances for the first time in program history, so they ended up nationally ranked in all three dances. I wouldn’t have traded this season for anything.”