Despite being cheesy, The Expanding Universe of Ashley Garcia brought a little joy into my universe 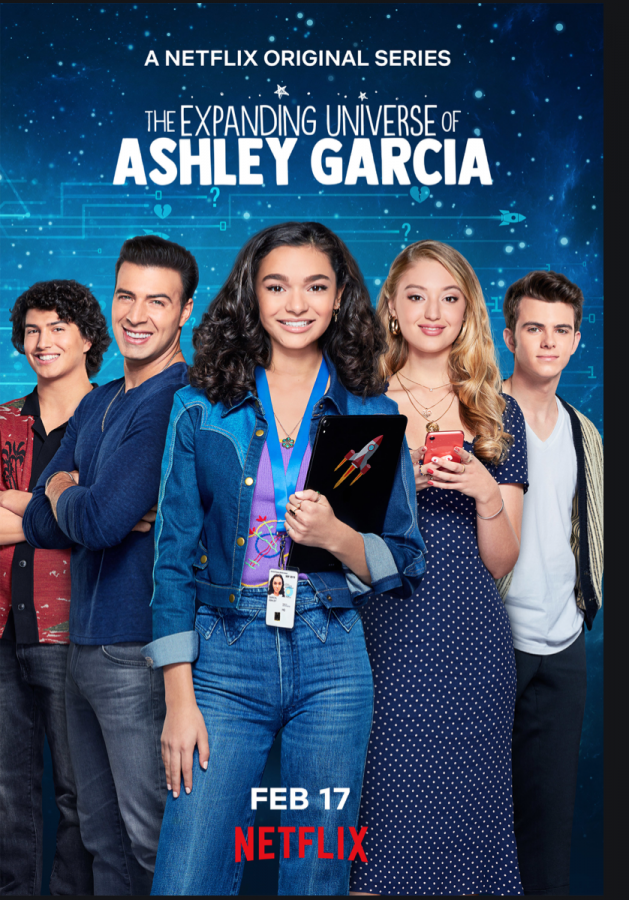 She isn’t your average teenager, and that makes it hard for her to navigate her adolescent years. But more than that, she is stuck in a love triangle! She has a thing for the football star, but her goofy, awkward friend has a thing for her. Good thing she has her popular, quirky best friend and fun, caring family to guide her through the complexities of it all!

Without any names attached to this description, it can be copied, cut, and pasted to any number of tv shows and movies, mostly of—though not limited to—the Netflix Originals genre. The writing and plot are formulaic at this point, leading to endless predictability. The Expanding Universe of Ashley Garcia, the newest Netflix Original tv show, is no exception.

Again and again, Netflix takes someone’s uniqueness and exploits it to isolate their protagonist for their warm-and-fuzzy teenage drama. Alexa & Katie exploits cancer. Tall Girl exploits height. To All The Boys I’ve Loved Before exploits introverted-ness. What’s next?

Starring as our atypical and loveable teenager is Ashley Garcia (Paulina Chávez), the fifteen-year-old child protegée who earned her Ph.D. at age nine and is now a robotics engineer and rocket scientist at NASA. Thanks to her new job, she is finally away from her controlling, overbearing mother and moving in with her tío Victor (Jencarlos Canela), a local high school football coach, in Pasadena, California.

In an effort to explore her new freedom, Ashly makes a bucket list that her childhood best friend—the popular, quirky best friend— Brooke (Bella Podaras) helps her check off. Filling the role of empty-headed football star is Tad (Conor Husting). Naturally, he is on-again-off-again with his crazy girlfriend as well as Ashley’s first crush. Filling the role of the overlooked, awkward friend-zoned guy friend is Stick (Reed Horstmann), who at first seems to be included purely for comic relief.

Yet amongst the stifling predictability, The Expanding Universe of Ashley Garcia caught me off guard, much to my delight.

All I can say is that the formula for Netflix Originals exists for a reason: it works. Though the individual episode plots were anything but original, I couldn’t help but grow addicted to the fabricated good feelings and artificial joy they inspired. Each episode ended wholesomely and satisfyingly in a way that other shows not following the formula—and real-life—can’t mimic.

The pesky last episode of the eight-episode season is simply out of place among the other seven 30-minute episodes. This episode was just drama, drama, drama. What I wanted was a lovely resolution to a cheesy, fun little show. But, what I got was a subpar, semi-satisfactory half-ending as the writers clearly wanted to force their audience to hang around for a second season.

I am not having it. In my head, I’ve already re-written a new and much-improved ending. However, as annoying as it is to admit, the writers’ irritating trick has already secured my viewership for the next season, though I hope it doesn’t continue the teenage-drama trend established in the eighth episode.

But, I do hope they continue the small splashes of ethnic color that delicately painted the background of many of the episodes. Ashley and her family are Mexican-Americans and proud of it. Over the course of the season, ethnic foods, as well as the Spanish language and Mexican history, are gently weaved into the plot.

Additionally, the acting of the show is comparable to that of a Disney actor: obviously overdone to anyone over the age of ten. Despite this, it wasn’t unbearable or distracting; it just was a bit ungenuine. But these days, above-average acting is hard to find so I suppose I can’t complain.

Altogether, The Expanding Universe of Ashley Garcia was a sweet, comical show that drew me in with its good vibes, so much so that the cliche plot couldn’t even turn me away. While I wouldn’t recommend this show to anyone looking for an innovative, addicting show to binge, it certainly is perfect for the bored audiences of Netflix Originals.