The Central Trend • May 28, 2015 • https://thecentraltrend.com/848/showcase/brandon-chase-shining-a-light-on-fhc-theater/ 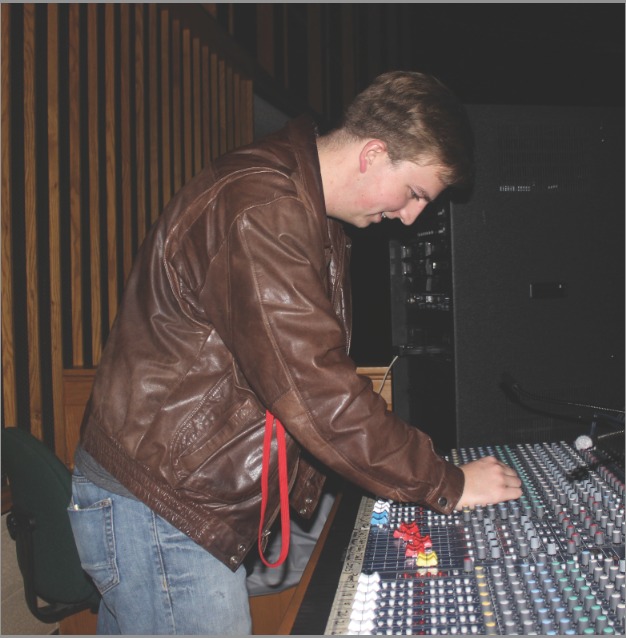 Lights, camera, action. Everyone has heard these words at one point in their life, but junior Brandon Chase lives them as well. Chase is currently head of the tech team for the FHC’s theater department. He and the production team help give the play its backbone, without which nothing could happen.

“Our team makes sure everyone’s mics are working, builds the sets, program lights, and manage props,” Chase said. “I personally run everyone’s sound. I also do sound effects, mics, and help with the lights.”

Chase was not fond of the theater world at first, but both his brother being actively involved in the production crew, and having director Robbin DeMeester as a teacher freshman year guided him into it.

After he got into it, he fell in love with it. Chase loves using power tools to build the sets and enjoys being around the all the technology and learning about it. He also loves the people.

“I really like doing the building work with the sets,” Chase said. “I also really enjoy working with the sound equipment, programing, light, any of that stuff. “

“We build sets in a huge loading bay in the auditorium,” Chase said. “We store a bunch of stuff in there like old sets so we can use stuff from them. This year, Stiles is helping us build both the fall play and the musical set. Sometimes we are lucky and can rent the sets but this year for our musical there is not a set rentable.”

Senior Makenzie Bosworth explained to me that there is a lot more that meets the eye when it comes to plays. For instance, there is acting on the stage, people backstage, and even a select few who are in the technical booth.

“Everyone works so hard,” said Bosworth, a crew member in this years fall play. “ So much more goes into every production than I think most people realize. The people in the theater department are so passionate and dedicated and love what they do. It’s really an incredible thing that I get the privilege to be a part of.”

Being dedicated and passionate are two reasons why the crew and actors love spending time with each other. Both Chase and junior Avery Ferin feel like the experience brings everyone closer together. Ferin also says that it is a perfect way to meet and interact with people from different classes.

“Everyone gets to be so close because we spend so much time together over the course of three months,” said Ferin, who has a lead in the fall play. “ When it all pays off it’s the best feeling in the world to see all of our hard work really show onstage.”

One thing that Chase also really enjoys about his theater experience is his relationship with DeMeester. He explained that every since he started she has been there for him and taught him all about the show process.

“She does a great job including the crew people in everything,” Chase said. “DeMeester is like a second mother to her crew. She is kind of my mentor because I really wasn’t interested in [theater] until she brought it up to me.”

DeMeester thinks of Chase as a “pseudo son.” She also said that she thinks of the crew and the actors as her children and that she loves spending time with them.

“Brandon is hardworking, kindhearted, and a great crew head,” DeMeester said. “He is loved by all in the theater department.”