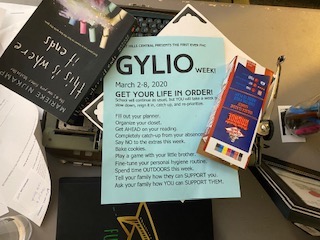 Math teacher and head of the Boost club Tracy Will believes that students need to cancel out all of the external stresses that go along with school and take time for themselves.

In an article that she read, Will learned all about how a “get your life in order week,” or GYLIO, could help her solve her issue. This type of week originated in some of the colleges located in Australia, and she thought it was a fantastic concept. During that week, while academics remain the same, students are encouraged to take time to focus on themselves in whatever way they see fit.

Within the week Will has introduced, her main goal is to see it grow as time goes on.

“I thought that it would be great to launch [a GYLIO week] at our school,” Will said. “My hope is that we end up with at least two of these a year, and as we offer them, more students will think, ‘Oh yeah, I remember that last time I made cookies with my grandma,’ or something like that and look forward to continuing that tradition again.”

While Will hopes that this week affected everyone in a positive light, her main focus was on those a bit younger by giving time to figure out who they are as a person.

“I especially hope that freshmen, in the future, can take a week in October to realize, ‘who do I want to be? How much work do I want to put toward this class?'” Will said. “I hope that Get Your Life in Order Week can give [students] some distance and regain perspective on what’s important to [them] and who do [they] want to be in this high school thing.”

During the course of last week, many students participated in GYLIO week, one of whom includes sophomore Brian Travis.

Due to one of the classes Will teaches, Brian was able to take some scheduled time during her class to regain focus on multiple topics that Will chose for her students.

“It’s always good to think about what you’re thankful for and write it down,” Brian said. “That’s something that I don’t do as often as I should, so for me, it was actually pretty nice that we were told to write three things down that we were thankful for for a few days [that week]. I think that’s one of the things that you can do to be happier in your life, and I don’t sit down and do that as much as I should. So, I did like that aspect of it.”

Brian was also able to carry on what he had learned from the classroom to the outside world.

For many students, the life of homework and studying can become quite stressful. However, Brian took the activities that he did in Will’s class and tried to find a way to escape from the stress, even though at some points, he found that it was challenging to complete said tasks due to the lack of time he encountered.

Though apprehensive, in total, Brian did find many ways that GYLIO week did benefit him, one of which was finding more time to take breaks.

“I took a little bit of a break,” Brian said. “In robotics, it is build season right now, so it’s really intensive hours of being at meetings. On Wednesday, I only went for half a meeting just so I could get work done and then go to sleep earlier.”

Brian also took some time to spend with his family at a comedy show last Thursday that, typically, he would not be able to attend, but because of GYLIO week, it inspired him to participate.

“Adding a little bit of laughter and fun into your week, when [compared with not] doing those things, I would’ve had significantly less fun and laughter,” Brian said. “It just improves your mood, your mindset, and your attitude towards work in general.”

Brian was not the only student, however, that benefited from the GYLIO week. Due to Will, who is also her teacher, freshman Faith Williams also took action on the opportunity to focus on herself in the mix of a busy school week by taking the time to clean her room.

“If I clean my room, it just makes me happier,” Faith said. “You just feel so much better, and then you have so much more room to work with, and you’re not like, ‘oh, I can’t get to anything.'”

With Will’s mission being for students to carry on the lessons that they learned last week, Faith agrees and believes that she will strive to keep up with the progress that she has made.

“I just learned that you could live a happier life with a cleaner room,” Faith said. “If your room is not clean and it’s dirty, you’re not really that happy.”

Whether it is cleaning a room or going to a comedy show, Will’s idea of implementing a GYLIO week has been a genuine success that has helped these students to strive to continue what they learned last week in the future.

“I would really recommend it [to everyone],” Faith said. “I think they will be happier, and once you clean your room, you can actually find a lot of things that you could not find before.”

Overall, in the eyes of the students, GYLIO week was an eye-opening success.

“I think I’ll probably take a little more time for myself in general after this,” Brian said. “I don’t know if I’ll be doing a ton of more stuff because school is still going on, but when you can, just taking that chance to do something for yourself in your mental state is good.”