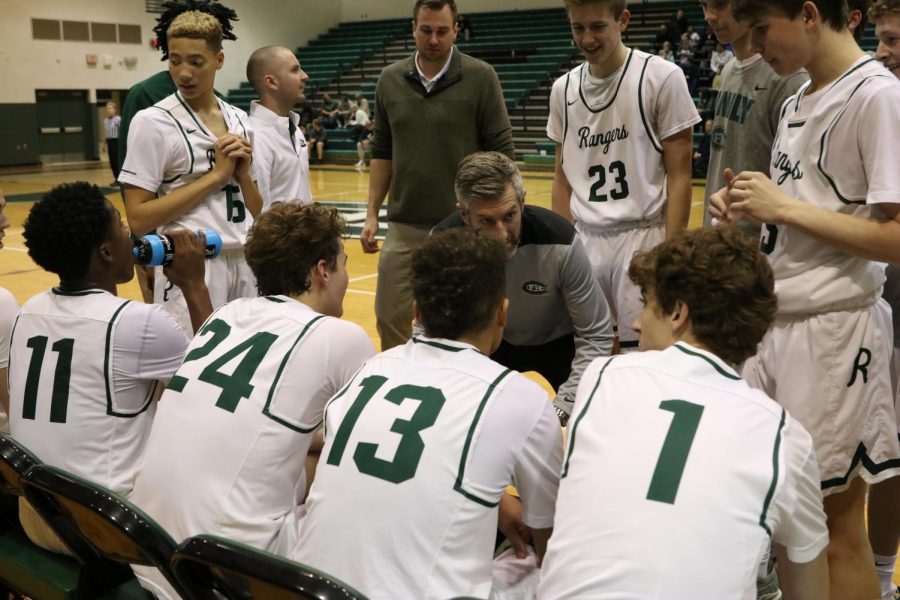 Although senior Jimmy Scholler and junior Chris Battiste both finished with double-digit point totals, 15 and 13 respectively, the boys varsity basketball team fell 58-54 to the Rockford Rams in the district round of the state playoffs on Monday. This ended a Rangers season that showed a significant three-win improvement from last year.

Jimmy put up some impressive numbers to complement his 15 points; he had seven assists, three steals, and one block. Chris supplemented his double-digit night with one assist. Other notable performances came from junior George Hatchett, junior Jonah Spates, and senior Mitchell Wilkinson—George had nine points, three assists, and one steal; Jonah scored five points and picked up two steals and one assist, Mitchell finished with six points and led the team in blocks with two.

The tension in the gym was tangible as the tip-off went to the Rams. Within a matter of seconds, the ball was back in the hands of the Rangers when George got a steal that would set off a run of defensive stops. After both teams scored their first respective baskets of the game, the boys got another steal, this time coming from Jonah. Despite its stellar defense, the team wasn’t able to capitalize on these opportunities early on.

“We’ve played hard defensively all year,” head coach Kyle Carhart said. “Unfortunately, we weren’t able to get on transition as much as we wanted off of those steals and blocks.”

The score at the end of the first quarter reflected what Carhart had to say: the boys had held Rockford to 11 points, but they were only able to put up six points themselves.

The Rangers clawed their way back point by point throughout the second quarter, and the momentum swing was most evident when with the boys trailing by five, a Rockford player was charged a technical foul for throwing Jonah on the ground after the whistle was blown when both players had a grasp of the ball.

“It gave us a ton of energy and two free points. The crowd got engaged and gave us the boost our team needed,” Chris said.

The boys went on a 9-4 run to finish the quarter, and they went into halftime up 24-23 after a three-pointer from Chris gave them their first lead of the night.

“Fortunate for us, Chris was able to knock down some shots,” Carhart said. “Chris’s was a big one because it gave our guys some life defensively.”

Unfortunately, this momentum swing wouldn’t last through the halftime break; both teams traded buckets and leads to start the third quarter, but the Rams created a small buffer that was just enough to carry them to the eventual conclusion of the game. The boys may have gotten down, but they were far from out of this contest thanks to their defense trying to step up against a Rockford team that could hit shots from seemingly anywhere.

“It was very important, we did our best defensively to get back in the game,” said Jimmy on the importance of limiting Rockford’s scoring when the Rangers weren’t able to convert on shots.

Their offense surged back at the end of the third, going on a 7-0 run to bring the deficit to only one point heading into the fourth quarter as the score was 42-41.

The fourth quarter got off to a slow start but despite the fact that shots weren’t falling for the Rangers, they still had a positive outlook on the game.

“No, we all know that sometimes shots won’t fall. In times like those, it just brings us to ramp up our defense to another level,” said Chris about whether missed shots created any urgency within the team.

Rockford made the first basket of the fourth, but continuous shots from the Rangers allowed them to never fall more than four points behind up until the final minute of the game. Three Rockford free throws extended the Rams’ lead to five with 56 seconds remaining. Mitchell made a shot to bring the team back within three points but as the clock drained to under 30 seconds left, intentional fouls had to be made, which put the Rams into double-bonus territory. They would convert five of their last six free throws, thus ending the game in a 58-54 Ranger defeat.

“The guys have done a great job all year knocking them in, but unfortunately tonight was not our night,” Carhart said.

This loss brings an unfortunate end to the team’s season highlighted by earning a share of the OK White conference championship. The team’s record concludes at 15-6 overall and 11-1 in the conference.