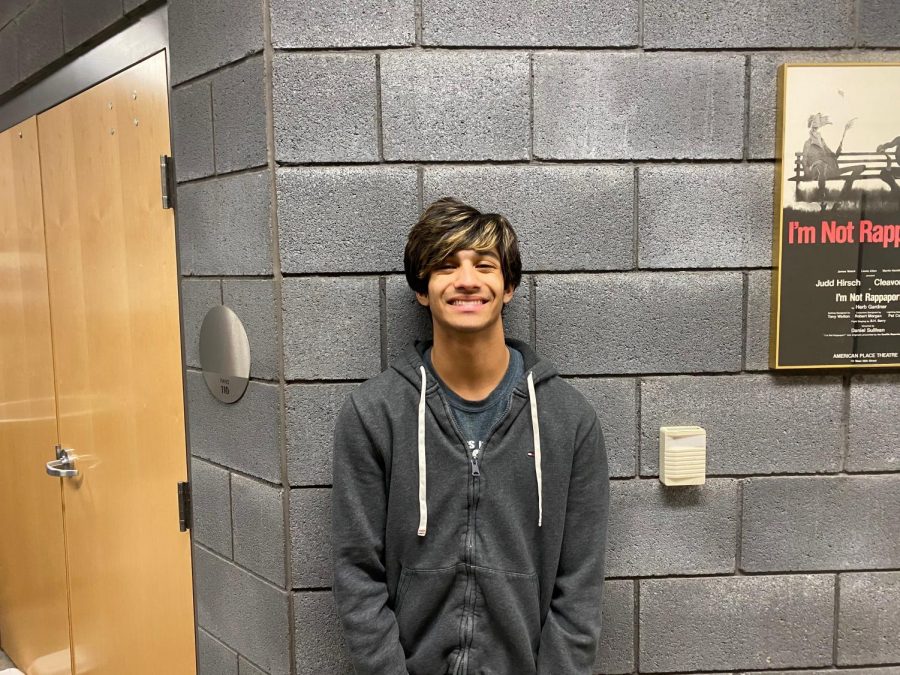 1. Do you have a “ritual” before rehearsals or shows?

“[The cast] always goes to Forest Hills Foods before every rehearsal at the FAC. I always get chicken nuggets with mac and cheese, and I put them in the box [so] I eat them together. That’s always my pregame meal essentially. It tastes really good; I’d recommend it 100%.”

“I’m familiar with her. Probably just a remix of her going [cash me outside].”

3. How long have you been singing?

“Technically speaking, a year and a half. I joined [the musical] Peter Pan sophomore year with no experience. My only experience singing was in the car and fifth grade [choir] with Kreikard. In fact, the reason that I joined Central Singers in the first place was because I had done the musical. I was like, ‘Dang, I like these kids a lot,’ so I wanted to hang out with them more, and Central Singers was just a good way to do that. Singing was always something that I found fun, but it wasn’t something I’d done in school because I played [the] violin. Chorale overlapped with [orchestra], so I couldn’t fit it in.”

4. What made you try out for the musical?

“I’ve been doing [the musical] for the past few years. The reason I did it [my] sophomore year was because my brother had done it, and he loved it. I kind of chickened out freshman year. There had been a snow day the day of auditions, and I was like, ‘Oh no, I guess I’m not auditioning.’ They held auditions, obviously. I was like, ‘Oh no, maybe I just shouldn’t audition.’ [But sophomore year] set precedent; I had so much fun then, and that has just continued through. I’ve just been having more fun ever since.”

“It’s very bittersweet. Part of my role is that it’s really separated from the rest of the cast. My favorite part about musical [though] is being able to interact with everyone, and my role is pretty separated from other people. All my rehearsals have people I already know. I love those kids, but it’s [not a good way to meet more people]. And obviously being a senior, it’s my last show, so that’s already just sad, but it’s such a cool show. It’s just a huge show. It’s probably FHC’s biggest show in a while. It’s massive. So it’s just really cool to be able to be a part of such a show.”

6.  How much of your personality can you blame on your star sign?

“Quite frankly, quite a bit. I’m a Taurus, so we’re probably pretty stubborn. I think that ties a little bit into me because, quite frankly, I say really weird stuff out of context. And so we’re supposed to be stubborn—like unwilling to change, which I think definitely impacts me. Although Taurus [is] also an earth sign. I think we’re supposed to be down-to-earth. That’s probably not me considering that I’m constantly tweaking. I’ve never had a normal day, I don’t think. I’m always doing something whack at some point. I feel like that probably creates complex tension in my character as [AP Literature teacher Lisa] Penninga would say.”

“I’d like to thank DeMeester, obviously, because she, from the get-go, was extremely encouraging of me being in [the] musical. [Junior] Ben Lowen has been really helpful. He’s very supportive with singing and stuff; he’s obviously just extremely skilled. He knows what he’s doing, so he’s definitely very helpful when it comes down to that. [Seniors] John Courcy, Cole Kaminski, Sam Werkema—who I’ve been trying to get to do the musical for several years—finally joined, and I’m extremely happy. I have known [Cole] since seventh grade. He’s an S-tier baller if we’re classifying. All four of them are S-tier ballers. I’d very much like to thank them for just being amazing.”