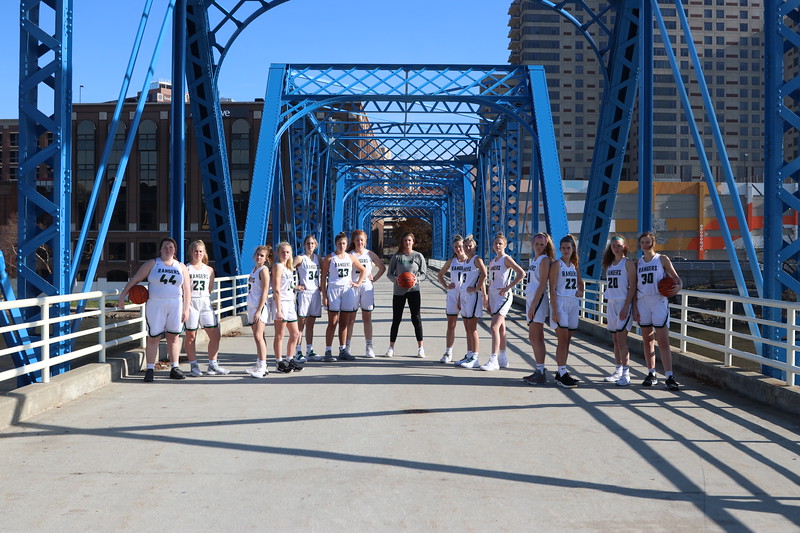 Sophomore Theryn Hallock’s offensive contributions were key in a successful season for the girls varsity basketball team. The girls ended the season with a 15-6 record and finished second in the OK White conference. For head coach Kristina Prins, Theryn’s versatility was key for the team this season.

“Having a [Theryn] type player is huge,” Prins said. “The passes she makes, the finishes she has, the steals she had on any given night were extremely impressive to watch. She has a bullseye on her back every time she steps on the floor. Yet we forget that she’s only fifteen years old.”

FHC’s strong defense was on full display early on in the season, holding a physical Wyoming team to under 50 points on the night. The Rangers got some offensive help from Theryn and junior Zoe Lipke, as the two combined for about half the points on the night. An 8-0 run would put the game away and FHC would start out 1-0 on the season.

However, FHC’s home opener would be a whole different story, as they suffered a 49-26 loss to Rockford. Shooting struggles hurt the Rangers in this one, as the team couldn’t even get a high percentage look to fall. Along with this, the pace of Rockford really tripped FHC up, as they were forced to play much slower than usual, in which the team hasn’t seen before

The team had a strong bounce-back game, as they destroyed the district rival Forest Hills Eastern Hawks. It seemed as though FHE had no answer for Theryn, as she scored 40 points while adding 11 steals and 7 rebounds. For Theryn, the aggressive mindset was the key to a dominating night.

“Going into that game, I had a mindset of no matter who the team was, [I wanted] to always play hard and represent,” Theryn said. “Along with just to never give up offensively and defensively.”

The girls continued their non-conference road trip against the Grandville Bulldogs. FHC put on another defensive clinic, only allowing 37 points the whole game. Even with a cold shooting night from 3, the Rangers were still able to put up a solid 58 points and run away to improve to 3-1.

That Friday, the girls would meet their biggest test of the season to date— the East Kentwood Falcons. Unfortunately, FHC would fall to EK at home despite a strong start. In the second half, the Falcons’ offense came alive and got many baskets, scoring 40 points alone in the final 16 minutes.

Looking to repeat as Cornerstone Holiday Tournament champions, the girls faced a tough test in the first round against the Grand Rapids Christian Eagles. FHC would fall in a close one despite great scoring nights from Zoe and Theryn. This led to a rematch with the Forest Hills Eastern Hawks in the third-place game, as the Rangers would win 47-23. FHC’s outstanding defense was the difference-maker in this one, as the team recorded 24 steals on the night.

Heading into round one of conference action, the girls needed a reset in their mentality to try and achieve their goal of repeating as OK White champions.

“Going into the first round of the conference, we knew it was going to be hard to beat a team for the third time,” junior Katy Majick said. “But we knew we could do it if we worked hard.”

Theryn dominated in the conference opener against Greenville, scoring 37 points while impacting the game on the defensive end as well. A 21-1 run to start the game helped FHC crush some of the Yellow Jackets’ momentum. Despite a cold shooting night, the Rangers were able to get the majority of their buckets in transition, and Greenville struggled to keep up with the fast pace of FHC.

FHC next entered a rematch of their district semifinal loss against the Cedar Springs Red Hawks. The Rangers would pull out the win thanks to some big baskets down the stretch from multiple scorers. The Red Hawks struggled to slow down the many offensive threats from FHC, giving the Rangers their fourth straight victory.

“The first win against Cedar was huge for us because we knew going into [the game] that it would be one of the toughest games in our conference,”  Zoe said. “So to secure that win early in the season gave us so much more confidence for the rest of conference play.”

Next came a Friday night match against the Lowell Red Arrows. Katy’s 14 points would give FHC the lift they needed to defeat the Red Arrows thanks to a solid shooting night and another great game on defense.

Theryn erupted for a career-high 43 points the next Tuesday against Ottawa Hills. Despite a slow start, FHC was hot offensively and had one of their best offensive performances of the season. The Rangers extended their OK White winning streak to 4 games with a solid road win.

The Rangers shifted their attention to a battle of the undefeated teams against Forest Hills Northern. The Huskies had a hot start, but FHC became more comfortable as the game went on. With struggling to rebound and many critical turnovers, the Rangers would suffer their first conference loss of the season to FHN.

“[The] toughest part in that [loss] is just that it was a rivalry game and they are in our conference,” Theryn said. “It was frustrating because we would get on runs and then they would so it was on and off. [Another] tough part was staying consistent as a team and individually. ”

The schedule did not get any easier for FHC, as they took on a very good East Grand Rapids team. The Pioneers’ star player Gillian Brown had a very good game, scoring 25 points and playing some great defense as well. The speed of EGR wore the Rangers down, as FHC fell 73-48 to the Pioneers.

“Beating Northview was a huge confidence boost,” Prins said. “They lost some incredible seniors last year and were in what we call a rebuilding year this year. Yet there is still something about them that gets us tripped up every time. So to be able to walk away with a victory was big for the girls.”

Entering the second round of conference, the Rangers hoped to make a statement with a home game against Greenville. Timely shots from Theryn and senior Ally Ringler helped FHC secure a close victory against the Yellow Jackets 51-42.

The team then traveled to Cedar Springs in a rematch with the Red Hawks. FHC would defeat a solid Red Hawk squad by 2 points thanks to a phenomenal all-around game from Ally Ringler as the Rangers claimed another OK White win.

FHC stayed solid with 2 big wins against Lowell and Ottawa Hills. In both of these games, the Rangers did a very good job of making shots early and getting out to an early lead to begin the game. Theryn did a great job of being aggressive and getting high percentage looks, which would help them later in the season.

The Rangers would have a lot of momentum going into a big OK White game against Forest Hills Northern. In a battle to the end, FHC fell to the Huskies due to some big late baskets from FHN and some crucial Ranger turnovers. This gave the Huskies a one-game advantage over FHC in the OK White. For the team, this loss was

“The loss against Northern was so tough because we were really evenly matched teams,” Katy said. “It was a very good game and the final score reflected that by being so close.”

The team would finish off the regular season against Northview on senior night. FHC had a much better offensive performance that night, as they put up 54 points compared to 30 points last time around against the Wildcats. Thanks to some great shooting, the Rangers finished the regular season 15-5.

FHC then began the postseason, where they would square off against Lowell for the third time. Despite a comeback from the Red Arrows at the end, the Rangers managed to hang on and advance to the district semifinals.

“The key to our playoff win against Lowell was transition baskets,” Zoe said. “We really focused a lot on that because Lowell runs a 2-3 zone, and since we weren’t hitting our shots, those transition buckets were key.”

The district semifinal would be a rematch with Rockford on the Rams’ home floor. FHC had a rough start, as Rockford was up double digits for the majority of the game. Despite a major Ranger comeback and cutting the Ram lead to 3 points, FHC fell short and ended the season with a 15-6 record.

With the majority of the talent returning next year, FHC should be a very dangerous team next year and certainly a contender in the OK White. However, to accomplish this goal, they will need to work hard in the offseason.

“This summer the key will be to have all the girls around,” Prins said. “We didn’t have a single week the entire year where we had a full team. We had so much untapped potential and having the girls get together and play a couple of days this summer would be huge for us in the cohesiveness we need. We have three big leaders returning and some crazy talented athletes. The more shots we get up, ball handling that we do, and time we spend together can only help us be more successful. Also getting Remmie back will be huge for us. She was a big presence that was missed this season and a leader who leads by example and is a fearless competitor.”