Through rosy glass and dark curtains 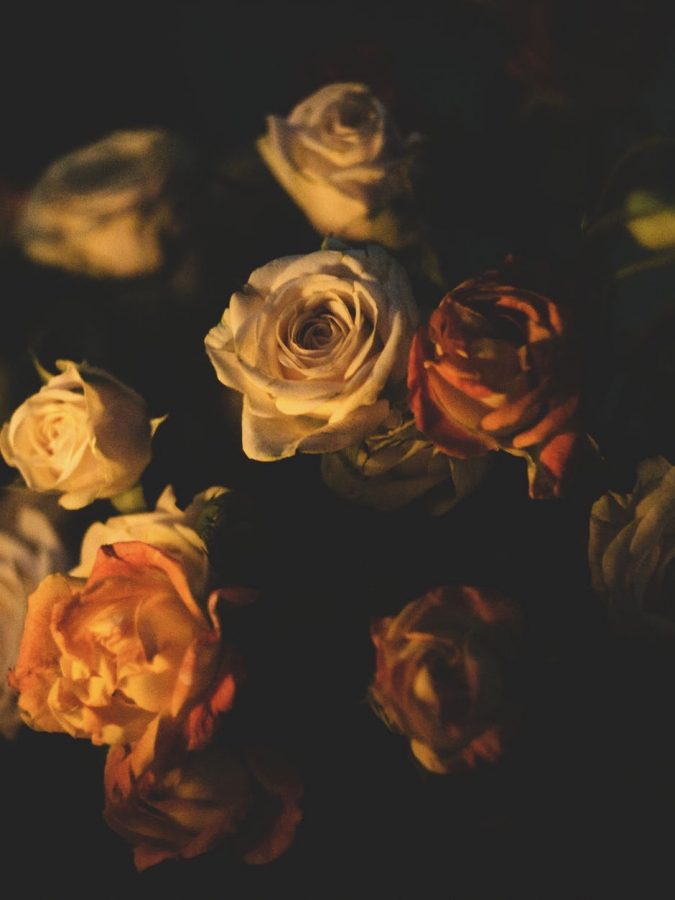 The day begins with gentle coaxing from the elaborate folds of sleep.

First the sunshine, faint and pale as spring, cloaking the room in a nebulous haze that went unnoticed until the alarm—not sharp enough to cut through the stupor until it blared with urgency.

The dreams next, lucid and disorienting, languidly grasping to the brink of unconsciousness, hanging over waves of clarity.

Then the voice, gentle because it was familiar, beguiling with promises of conviviality just outside the covers.

She extracts herself from the layers of fabric that lulled her to sleep the night before. Not quite awake, she traipses up the stairs with a bundle of clothes draped over her arms. It’s the music—floating through the bathroom, mingling with warm streams of water—that kindles a profound need to dance and sends her spiraling out of grogginess and across the bathroom floor.

The shower washes away the final hazy splotches of sleepiness and leaves her snugly wrapped in bright colors and smelling of coconut water, mimosa flower, and color care shampoo.

In the kitchen, she heaps a porcelain plate with fluffy mounds of casserole and delicately balances that plate with a champagne flute full of orange and sparkling white grape juice.

The living room welcomes her into its early morning arms, already housing the other four occupants of the house. And in the rising sunlight streaming through the doors opening onto the deck, a sacrosanct moment transpires, in a different time and place, simultaneously now and in this place.

The day proceeds as it is obliged to do, with honey chapstick, and smudgy chalk handprints, and time for midafternoon naps, or at least the beginnings of one—mellow light through the blinds and hills of cloudy blankets tucking her into them.

The most awaited part of the day arrives smoothly and without ceremony, and soon she is tying on muddy tennis shoes and snatching up a splintering wicker basket.

The yard is peppered with polychromatic, store-bought Easter eggs, hidden in plain sight, scattered about with precision and care. On “go!,” she is lifted on the wings of time, swooping back to the days when she was a little girl in a twirling dress, surprised by the treasure in each egg her little fingers grasped at.

Now she’s sixteen, and still mysteriously enraptured by the colorful eggs, despite having stuffed them herself. For this half hour, she is entwined in ribbons of happiness. The burst of elation at spotting a pop of color among the stems of grass. Rolling eyes and laughter when she missed an obvious one. And pure euphoria because she is surrounded by the people whose love and support has never wavered.

Then there’s counting the eggs, opening them and sorting their contents, and attempts at trading candy like Halloweens of the past. And then chocolate, melting in her mouth, giving way to cream or caramel. Shiny foil wrappers, the clatter of jelly beans, eggs scattered across the sheet on the carpeted floor.

As the sun lazily drifts below the horizon and the moon obtains precedence in the inky black sky, the soft murmurs of the TV and dim lamplight lovingly guide her back towards the arms of sleep and dreams.

In recollection, the day appears shimmering with joy, interspersed with incandescent memories.

But in the waning languor, the rosy colored glasses tumble from her grip, shattering against a floor of stark reality. A shadowy veil unfurls over the day, coloring it with seemingly accurate gloom.

The day begins with a pit in her stomach, the realization that sleep didn’t erase the ineffable brokenness from the night before.

The alarm is effectively silenced, and sleep is allowed to pull her back under with false promises, only delaying the sinking sensation of waking up.

A voice breaks through and wrenches her from her dreams minutes later, prompting echoes of guilt and reprimand at sleeping too late. This time, it’s simply a reminder that there are expectations waiting outside the heaps of blankets.

She untangles herself from the heartache and resentment that compelled her into sleep only hours before. In disorienting grogginess, she finds her way upstairs and under the relief of not-quite-warm-enough streams of water. Music blasts across the room, barely fulfilling its objective of coaxing her into a semblance of contentment.

She shivers her way through a shower before joining her family in the living room, goosebumps still trailing down her arms despite the blanket she’s trying to lose herself in.

The sun coming through the window, the rejuvenating music, the reassuring promises emerging from the figures on the tv screen–it’s all supposed to create a picture perfect image of spring and resurrection, but she can’t let go of the thought that it’s not supposed to look like this.

Never before has it seemed so salient to hear that someday, we will all be together again.

She emerges from the encounter feeling hauntingly empty.

In a sort of haze, the afternoon slips by. Early naps leave the house too quiet and too empty. A sense of disenchantment permeates the air, quietly finding its way into the crevices of her fractured soul.

There used to be magic here, but it has been stolen, hidden, placed out of reach, rendered invisible. She is grasping for the frayed edges of an evanescing afterglow.

The chasmic sorrow has been building up for days, leaking through the cracks in her armor, enthralling her completely in its most vigorous moments. Now it’s compounding again, droplets of water on a stormy surface, a wave heaving dangerously close to collapse.

For the fifth time in less than three days, she’s sobbing into her comforter, wishing away the cacophonous bombardment of emotions, trying to force it beneath an elegant and chirpy mask.

The truth is cutting. The pain is irresistible.

Everything has changed. And it’s not so much the obscurity of the pages that remain in this story, but the loneliness cloaked around this particular chapter. It’s what she does know that aches the most, the knowledge of all that was lost and might never be recovered.

She’s sinking beneath the waves of this pain, grasping for the fragments of the shipwreck surrounding her. She doesn’t have the strength to hold herself up; she expended it all on upholding a facade even she hadn’t known she was wearing.

When the tears subside, they leave messy trails down her cheeks and a shadowy stain across her heart. She allows the soft white quilt and the flowery fleece blanket to cocoon her, wrapping their unconditional warmth and support around her, but she doesn’t fit into this ethereal picture.

Sun streaking through the window, painting the room with its soft glow. Gentle silence. Bated breath. Waiting for a miracle, for something more.

And she is a tear-stained smudge, giving more and more of herself away in allegiance to the gaping lacuna in her soul, then filling it with things that are not her, so far from her.

She relents to the possibility of sleep, but lucidity refuses to relinquish its grasp on her. For hours, she hovers in the surreal space in between, the place where everything seems entirely possible and entirely impossible all at once.

The anticipated festivities are heralded in alongside tension and animosity, a fire whose fuel has been building for weeks and has now been doused with gasoline.

Everything this day was meant to be has fallen flat, a collapsed house of cards that had once been perched in the distance, a stopping point, a resting point—nothing now, just a meaningless pile of flimsy white cards.

The rest of the day is now a smear in her mind—dim ceiling lights, white lampshine, monarchical music, rich bold images. There is brief clarity surrounding a specific moment—all five of them, spanning the gray couch, together.

In recollection, the day appears muddled with dark potholes, a ruined portrait of what it was meant to be.

She tears down the sheer, black curtain. Frustration roils in the pit of her stomach as her fingers grasp at the silky fabric. It falls to the floor, intermingling with the shards of rosy glass.

The dark. The light.

But as her vision starts to blur and the sharp corners soften, she stops seeing two different things.

They are both broken, both wrong, but maybe, finally, together—as they always should have been.

She kneels, surveying the mess before her. Gently, she wraps a few of the shards in a shred of fabric and tucks it into her pocket.

Because there will be more.