The butterfly part one 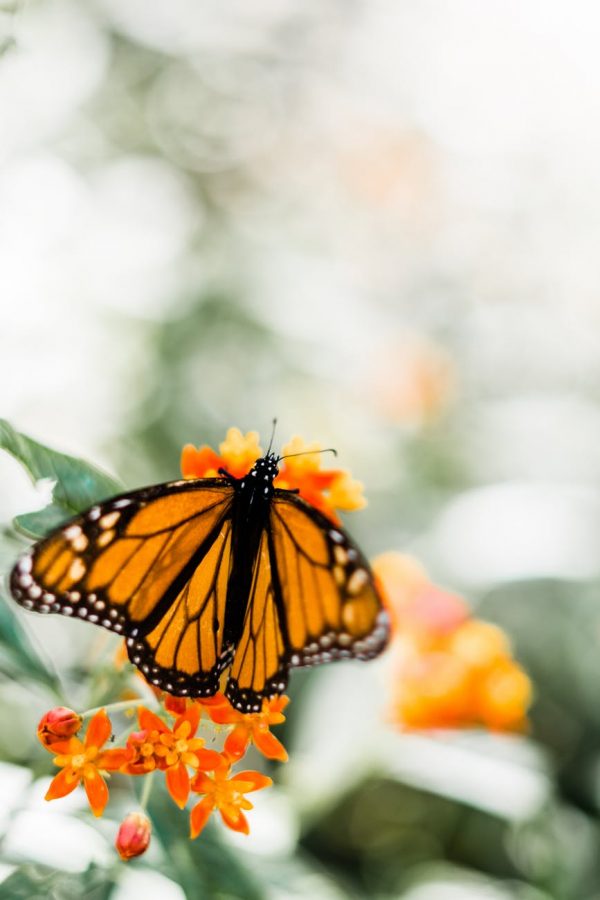 She got up for the sole purpose of acquiring a glass of water when a flash of color caught her eye.

It was the sort of mandatory trip that was just pressing enough to evoke her from her swath of quilts and blankets, so any divergence from her path to the sink and back seemed precarious. But the burst of orange was tempting, so she tentatively tip-toed over to the window.

Partially wrapped in a transparent shell and on the verge of pushing his blood orange wings free, the monarch butterfly was hanging from a slender sprig of the tree outside her window.

Athena paused for a moment, unsure if her seclusion had provoked hallucinations, but ultimately, it was far too tame of an occurrence for her to be hallucinating it. Nonetheless, she was astounded; she had unreservedly expected to never see the caterpillar again, and yet here he was.

Or at least she assumed it was the same caterpillar. It was entirely possible that a distinctly different caterpillar had chosen this spot to create its chrysalis, but perhaps because she wanted to believe it so intensely, she had an inkling that it was, in fact, the same creature.

As she ventured downstairs to complete the task of retrieving her glass of water, a sense of eminence began to overcome her. That the caterpillar-turned-butterfly would choose the branch outside her window to endure his transformation was a reverential realization. She wasn’t any sort of expert on the inner mechanisms of monarch butterflies, but she must have had some impact on his ephemeral existence for him to choose that particular tree branch to build his chrysalis. Or perhaps he’d merely spent enough time on her windowsill that the place was familiar to him. But regardless, she’d played some semblance of a role in his time around the sun, and that, oddly enough, felt like an accomplishment.

Back in the security of her room, she moved her bed so that it rested just above the trim framing the window and propped a pillow against the sill so she could rest her chin comfortably while observing the emerging butterfly. With the window open a few inches, the room filled with the gentle scent of summer and the unhindered rays of sunlight, and for a moment, she allowed herself to be ok.

Emerging from his chrysalis resembled gradually being pulled from a dream. First, the utter disorientation of waking up and being unsure of who he was or where he was. Then, the first fragments of memory that returned to him—more importantly, the realization of pain. That was the worst part of it all, becoming aware of the pain that had propelled him to this point. And now, he was still lost in a cloudy mist, fighting to grasp onto the remnants of himself that fluttered around like lost leaves in a storm.

But a dim ray of hope had poked its way past the transparent walls of his chrysalis and was slowly drawing the fragments of himself back together. That ray of hope was the voice of Athena, whose presence broke through the fog and struck a chord that rang through him in resonant remembrance.

It was her voice, lyrically weaving stories of her days, that threaded him back together. When the transparent film had all fallen away, and he could stretch his vividly embellished wings out toward the clear cerulean sky, there was a strand of her essence woven into their shimmering splendor.