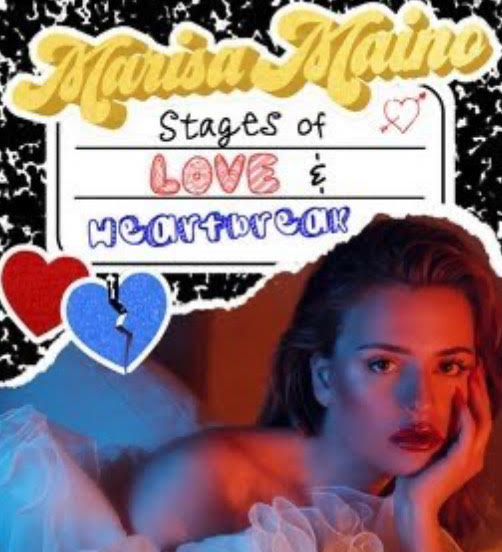 I’ve been a fan of Marisa Maino’s music since at least 2018.

When I saw she was releasing an album, I was more than excited. I was ecstatic, and now that we’re in quarantine, I’ve been listening to it on repeat for days.

Maino kicks off her album Stages of Love and Heartbreak with a song about want. “want u like that” explains her feelings for this friend of hers. She has a platonic relationship with this person, and this song is really about how she wants more than just a platonic relationship. She shares how hard it is to fight her feelings when she knows exactly how she feels. With lyrics like, “I know you’ve seen me hurt other people. You’ve broken hearts so I guess that we’re equal.” Maino continues to give us an indepth look at her existing relationship with this person, and it shows us that they’ve known each other for a while.

Next in the album order comes three songs Maino has released prior to her album.

“EVER YOUNG” focuses on how you don’t know what you have until it’s already gone. The song’s focus seems to have shifted from wanting something she didn’t think she could have, like in the first song, to her having the relationships that she wanted. The opening to the song further drives this point home. She wants something to remember him by because summer goes so fast. The upbeat rock-esqe lyrics and melody give the song a catchy chorus that you can’t help but repeat on a loop in your head. Maino had previously released this song back in 2018, but she also added it to this album as the second track.

Like Maino stated in her last song, “it feels like nothing ever lasts,” she wrote “boy toy” about that exact situation. The song continues writing the narrative of her relationship. The song focuses on her being this strong, independent woman who doesn’t “need holding hands.” She recognizes that this boy that broke up with her isn’t the only one, and he needs to realize she has more options than just him.

Moving on in the album, “HOT” was the first song of Maino’s I ever heard. It was spring break 2018, and I remember I played the song on repeat for hours, and I still have all the lyrics memorized.

After gaining back her independence with “boy toy,” Maino wrote “HOT” about running into him at the bar. She feels confident, is dressed to the nines, and thinks he is starting to feel bad for breaking up with her; then his new girlfriend walks in. “His new girlfriend is hot. I was hoping for a trainwreck but she’s not. She must of lost a bet cause she’s out of his league.” The chorus is lyrically genius, and you just can’t stop yourself from screaming the lyrics. She even touches on feeling inferior compared to this new girl, an intimate insight to her emotions.

“bored and brokenhearted” is my personal favorite track on the album. The aftermath of her breakup is the main focus of the song. The songs keeps switching between a hurricane of instruments and lyrics, a pond of toned down lyrics, and a singular instrument backing them all. Throughout the song, there are sporadic bursts of chaos that make me think that it’s meant to symbolize her emotions during this tough time: outright anger, coming to peace with things, and quick bursts of rage.

After being heartbroken, Maino comes to a realization with her next song “LOVE SUX.” She sings about how she wishes she knew how much love would cost. After falling in love and falling out, she says she “still read the stories, the fairytales and dreams, like happy ever after is something I can reach.” After how much she’s been hurt by falling in love and how much she has had to give up, she still keeps falling back into the same pattern.

While the first six songs on her album are upbeat, angry songs that tap into the bitter feelings that come with a relationship, “mistake” is the most undeniably vulnerable song. It goes back to the same message from before about her being this strong figure who “would rather be alone than be a mistake.” The lyrics also carry the “right person, wrong time” message, but she realizes that she deserves more than to be somebody’s mistake.

After finishing the album, I was a little confused. Three of the songs had been previously released a few years ago, and I had never seen an artist add music she released from as far ago as 2018 into a recent album.

But after listening to the album the first ten times, it made more sense.

Maino walked us through the stages of love and heartbreak—hence the album title. The way that she uses words and how she strings them together to create this narrative for us to walk through is fascinating to me.

The uniqueness of the lyrics and the songs will make this album a forever favorite of mine.