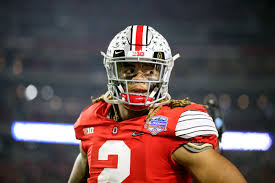 With the whole sports world being on hold for the past month, we have been all waiting for an event to happen that has to do with sports. With the recent premiere of “The Last Dance”, we can look forward to another event happening this weekend. The NFL Draft will be taking place from Thursday, April 23rd to Saturday, April 25th, and with that comes plenty of sportscasters around the world creating the infamous “mock draft.” I decided to hop on the bandwagon, as some would say, and I will give you who I think the first five teams are going to draft in the first round on Thursday, along with some honorable mentions who could make it into the top 5. As for now, let’s look at who I think could be drafted in the top five draft picks on Thursday.

He’s a hometown kid with a bunch of swagger. With the Bengals having a lot of struggles at the quarterback spot in their lineup last year, Burrow can become an instant game-changer. He proved he could be the best while beating the best in college. He threw for an FBS record 60 Touchdowns in one season last year with LSU, while beating teams like Oklahoma, Clemson, Alabama, Georgia, and Florida. He also played in the SEC, which is arguably the best conference in College Football. While running a pro-style offense under head coach Ed Orgeron at LSU, Burrow can adapt very quickly to the pro offense the Bengals have to offer for him. With John Ross and Joe Mixon as weapons on offense to help Burrow out, and if Cincinnati drafts mostly defense for the rest of the draft, they will definitely improve from their two-win season last year.

In my opinion, Chase Young is the best player in the draft class this year. With 16.5 sacks and 46 total tackles in a year where he missed 3 games due to suspension, you can look for Young to be an instant impact for the Redskins. With Alex Smith coming back on the offensive side for Washington and the tag team of Young and second year Outside Linebacker Montez Sweat, I think the Redskins could make a run for a low seed playoff spot in a weak NFC East Division.

Jeffrey Okudah can do it all. From coverage to tackling to hitting, he is an all-around athlete. With his quick feet and smooth movement on coverage routes, he can stay with the best wide receivers in the NFL. He also can run pretty fast, adding that he can stay with the fastest wide receivers in the NFL to his now fully equipped arsenal. With the Lions losing star cornerback Darius Slay this past offseason due to trade, Okudah will be a day-one starter. He is destined to be an X-Factor for the Lions and for a great NFL career.

If general manager Dave Gettleman doesn’t mess up his top 10 draft pick like he did last year, this is the guy they need to draft. With the linebacker core for the Giants being very weak, Isaiah Simmons is a great fit considering that he played a snap at every position on defense for the Clemson Tigers. He put up numbers that impressed everyone at the combine with a 4.39-second 40-yard dash and a 39-inch vertical. With this, Simmons will be a very versatile player for the Giants, playing at Middle Linebacker; he can provide a huge edge threat on passing plays. If Simmons plays the way he did at Clemson, I think he will be an instant gamechanger for New York and will push them towards a winning season.

Now I know Tua Tagovailoa is the better option to pick at quarterback here, but I have heard that the Dolphins are more interested in Herbert than Tua. I don’t want to sound like Mel Kiper and be all obsessed with Justin Herbert and how good he is, but he is a good athlete. With an impressive 4.68 40-yard dash, he can move out of the pocket and throw while still having a pocket presence as a pocket quarterback. Combined with being very smart and having knowledge for knowing where the defense is, Herbert has potential to be a great quarterback in the NFL. Especially since the Dolphins only need a QB to make a good team now with signings on both offense and defense, I feel like the Dolphins can make a good run this year and in future years with Herbert.

The players that I will mention here are the ones that could sneak into the top five if a team trades up to get him or their draft stock rises during or close to the draft.

With my prediction that Herbert is going #5 to the Dolphins, I feel like Tua could go earlier, or maybe even the Dolphins change their mind and take Tua at #5. With two impressive years at Alabama, even though his last season ended with an almost career-ending injury, he has put up great numbers with a great pro-style offense at Alabama. Even if he has been plagued with injuries his whole career, I believe that Tua can get past his injury-prone ways and can have a great career in the NFL with only minor injuries. If he stays healthy for the team he plays for, he will be a great player in the NFL.

Even though sports have been put on hold, we can look forward to the future in the NFL Draft on Thursday, April 23rd, and we can look at who our favorite team drafts and how they can impact your team. Now, let’s stay positive and look forward, because the future is now.