Outer Banks is the ultimate escape from the real world 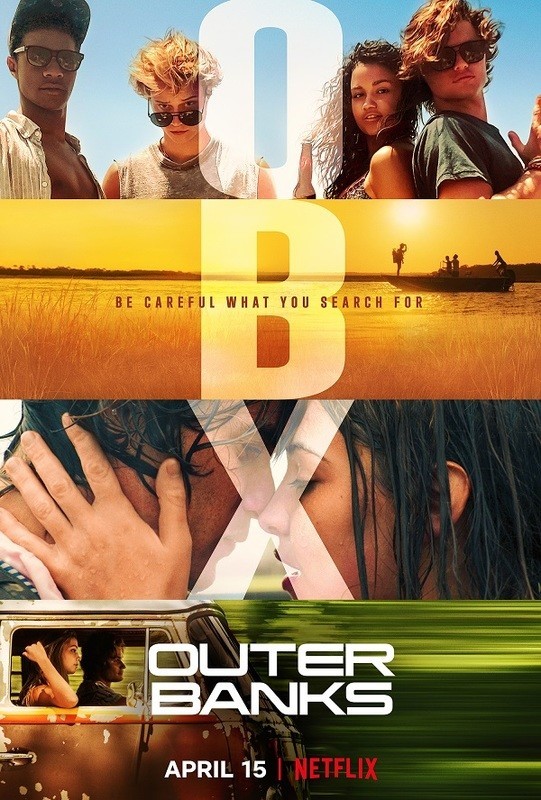 My least favorite part of reading a book is trying to power through the beginning to reach the interesting points of the plot.

Trying to reach those riveting moments is one of the many reasons I prefer to watch a story unfold rather than read about it, yet when this situation occurred in the new Netflix original show Outer Banks, it made me enjoy the show even more.

Outer Banks follows four teenagers—John B Routledge (Chase Stokes), Kiara (Madison Bailey), Pope (Jonathan Daviss), and JJ (Rudy Pankow)—who are on a hunt for a treasure linked to John B’s father’s disappearance that was left on a sunken boat called The Royal Merchant. These four teens soon discover, however, that they are not the only ones in search of the so-called ‘treasure.’

With three of the four teens from the impoverished side of the island and one from the wealthy side, the unexpected alliance between them creates the ideal surface for viewers to float on. As the series continues, more characters are introduced that end up playing a massive role in the hunt.

However, what would a series such as Outer Banks be without also following the opulent characters’ side of the story? On the other side of the island lives Sarah Cameron (Madelyn Cline) alongside all of her friends and family. Sarah’s side of the island does not play a major part in the plot in the beginning, but as the story continues, they are the characters that make the plot all that it is.

The two separate stories, one following the life of four teenagers and the other following Sarah’s life, are quite compelling on their own. When the two stories are combined, however, they create one impeccable story known as Outer Banks.

The first episode of Outer Banks left me feeling as though it was not entirely worth my time, but then I realized time is the only thing I currently have so it would not hurt to give the show a chance.

The second episode was almost a dealbreaker for me though. The mediocre camera work and a plot that did not appear to become much more interesting caused a bit of ambivalence in my mind. However, once I reached the cliffhanger at the end of the episode, I could not look away from my screen.

Every aspect of Outer Banks reaches absolute perfection: the reckless fights, the pointless teenage drama, the love triangles, and combining the stories of five completely different people into one.

Outer banks is, quite frankly, one of the most unpredictable shows I have ever seen. The spontaneity of the show left me practically screaming at my phone for the actions of different characters.

Every minute the show continued was another minute I refused to put my phone down. Every detail was clearly thought out. From the weather changing according to the scene to the background music enhancing the acting, the show amazes me. Even through the final episode, the plot flawlessly sets up a story for the next season to go off of.

Outer Banks is one of the most addicting shows I have ever seen, and I cannot wait for season two to be released.