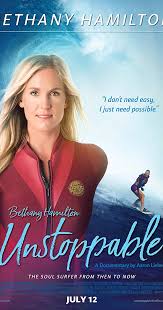 When Soul Surfer was released in the year of 2011, I remember watching it countless times with my closest friends. The exciting film told surfer Bethany Hamilton’s story about the shark attack that took her arm, but it did so through the use of actors to set the stage for her viewers and fans. Recently, Netflix released Unstoppable. The empowering film shares Bethany’s story, but it is done so in the form of a documentary.

With appearances from Bethany herself, siblings, parents, best friends, coaches, and more, the terrifying yet motivational story is told much more vividly than in the 2011 film. While Soul Surfer focused mostly on the shark attack itself, Unstoppable follows Bethany’s entire life and all of the challenges she overcame within it. Starting from the very beginning, Bethany’s passion and love of life sets the film off on an empowering note.

Director Aaron Lieber chose to begin the film with information and home-video of Bethany as a young girl learning to surf. By doing so, the audience can truly understand the natural talent the young girl possessed, and the love she had for the sport could easily be understood.

In chronological order, the documentary progressed. From young surfer to a sponsored champion, Bethany had the drive and the talent to become one of the best. But when she was attacked by a tiger shark at the age of 13, many thought her dreams of becoming a professional would be over forever, as she had lost her arm in the attack.

While many doubted that Bethany would ever surf again, her love and passion for the ocean gave her the power to get back on her board and return to the sport that her entire life revolved around. Although it was certainly a challenge, she quickly regained her skills and began competing and winning competitions once again.

As the film progresses and Bethany ages, the director also includes aspects of her life outside of the waves and the ocean: her family life. Growing up in Hawaii with many brothers, characters in the film express how Bethany always knew she wanted to have a family of her own. After tackling the journey of surfing with only one arm, the film follows her journey to motherhood and parenting just the same.

For many people, an accident such as the one Bethany endured at age 13 would set their lives back forever, but Bethany proved to the world that one event would certainly not be able to derail her entire life forever. Her journey through life became known around the world and certainly proved one thing: Bethany Hamilton is unstoppable.

The story within the documentary is certainly one to inspire people everywhere. It shows audience members that even through the most difficult times, good things can still come in the end. It shows people that with determination and a dream, any goal can be reached and that anybody can be unstoppable.