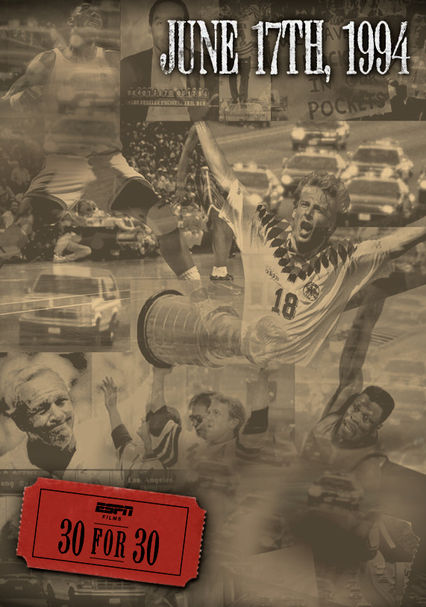 If you ask any random person on the street what happened on June 17th, 1994, they’ll most likely give you a blank stare or a reply of “I don’t know”. Some, more informed, may respond that it was the infamous day of OJ Simpson’s car chase. While this is true, many other events transpired in the sporting world on this day that will live forever in sports history. The remembrance of this historic date is thanks in part to the ESPN 30 for 30 made about this date titled June 17th, 1994.

The documentary covers six events throughout the action-packed day: Arnold Palmer’s last US Open round, the New York Rangers’ Stanley Cup Parade, Game 5 of the 1994 NBA Finals, the beginning of the 1994 World Cup, Ken Griffey Jr. tying Babe Ruth’s midseason home run record, and last but certainly not least, OJ Simpson’s car chase. What makes this film so interesting is that there is no narration throughout the entirety of the production—the only dialogue comes from the many news clips spliced together to form this story, and the tense music only adds to the drama of this documentary as the clips go back and forth to the different events during the day.

Starting with Palmer’s last ever US Open round, the clips used paint the picture that Palmer’s game is beginning to fade away as his shots sail into bunkers and off of fairways. Nevertheless, his loyal supporters and most golf fans in general applaud “The King” whenever a glimmer of his prime self shines through. After the focus returns to this event, it concludes this segment in the film with Palmer’s performance on the 18th hole and a teary-eyed interview.

On a lighter note, New York Ranger fans flocked to their team’s first-ever Stanley Cup championship parade. After failing to win in the finals in three separate appearances in the last 50 years—1950, 1972, and 1979—the Rangers were finally able to secure their first championship with a series victory over the Vancouver Canucks to overcome all of those years of disappointment.

The overarching story of the day, however, was the story of OJ Simpson. Simpson was a star NFL running back and an American hero, but after news broke a few days prior that he was a suspect for murder, news outlets flocked to his residence, only to not hear from OJ since before the story went viral. Clips from the LAPD admitting that they didn’t even know the location of Simpson play and as evening dawned over Los Angeles, the white Ford Bronco cruising slowly down the highway was seen by people across the world. The vehicle arrived back at OJ’s house and after a long, verbal standoff with the authorities, OJ was taken into custody.

At about the same time as OJ Simpson was on every television in the Bronco, a baseball game between the Seattle Mariners and Kansas City Royals in Kansas City was underway as Mariners’ stud Ken Griffey Jr. was looking to tie Babe Ruth’s record for the most home runs before June 30. Griffey would get the job done with a solo dinger early on and although he was on pace for the most home runs in a season of all time, the 1994 MLB season would later come to an early conclusion after a lockout canceled the rest of the season.

One of the more underlooked parts of the day came from the opening matches of the 1994 World Cup. This was the first official day of matches, and the two games that were played came from the competitors in Group C. At Soldier Field in Chicago, Germany came out with a 1-0 win over Bolivia, and later in the day, Spain drew 2-2 with South Korea at the Cotton Bowl in Dallas.

Lastly, Game 5 of the NBA Finals tipped off at Madison Square Garden between the New York Knicks and the Houston Rockets. The series was tied 2-2 going into this game, but before the tip, OJ was still the main story as broadcasters like NBC’s Bob Costas scrambled to find out what was going on while he would still have to commentate the matchup. The Knicks won the game 91-84 in front of the home fans, but the Rockets won the next two as the series moved to Houston, clinching the title for themselves and Finals MVP for Hakeem Olajuwon.

Chaos had arisen with the sun on this fateful day and lasted far after it had set. Some of these events started and ended before and after this day, like the OJ case, the World Cup, and the NBA Finals, while some made this day unique like Ken Griffey Jr.’s home run, Arnold Palmer’s final round, and the Rangers’ ticker-tape parade. I think that this compilation of all of these distinctive events is a must-watch for anyone interested in sports history.