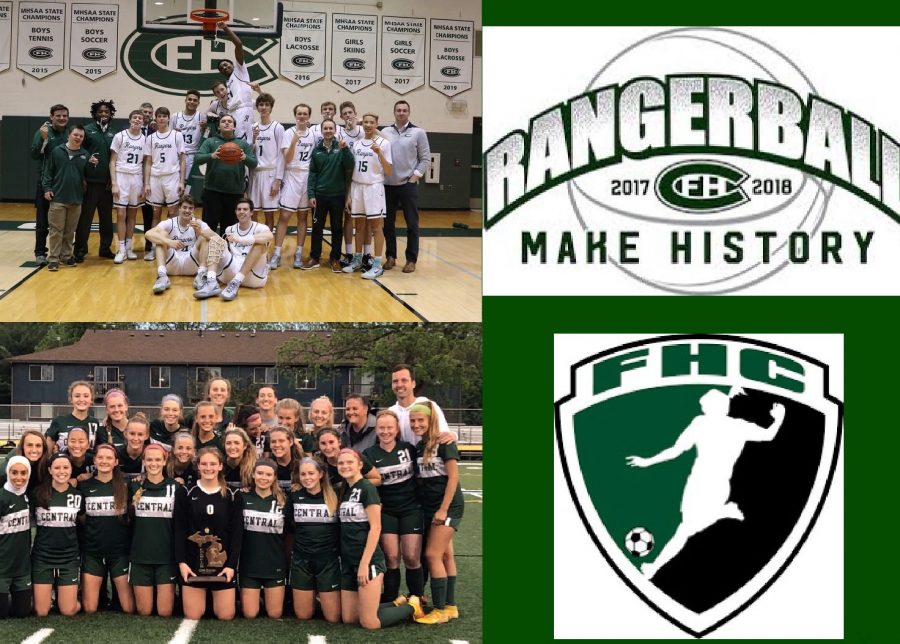 In the world of sports, the word “team” really stands out for most athletes. In any sport in high school, there is always the skill and practice that is involved, but what really allows certain teams to stand out is their bond. Some groups are just playing together and competing in practice, while there are other groups that seem to fit like a puzzle and truly stun their opponents. In this article, we’re comparing the likeness of two of FHC’s biggest sports: boys varsity basketball and girls varsity soccer. These two programs have had outstanding talent and teams in the past few years. Started by coach Ken George, the term “Rangerball” is what makes the Ranger basketball program stand out from others. Coach Carhart carried on this name for the past two years and has shown two very competitive and team-centered groups of guys. Girls varsity soccer is led by head coach Ashley Ludtke and is a very closely-knit program. These girls have been deep into the playoffs for numerous seasons in the past decade with a State Championship as recent as 2017, and it is thanks to the chemistry these teams held over others. Since these two sports are centered purely around the word “team,” we decided to ask some players on their thoughts of the word and what it means to them.

Senior Kelsey Toole: “To me, the word team means working together and pushing each other to achieve our highest potential. It means trusting each other. Being part of a team has shown me that through hard work, anything is possible. It has taught me that in life you need to make sacrifices for yourself and your teammates. Being a part of a team is also being part of a family.”

Senior Jimmy Scholler: “A ‘team’ for me is a group of people who come together with a common goal of winning. A team pushes each other to get better and competes everyday. Good teams hang out with each other outside of practice in the form of sleepovers, team dinners, etc. I played for two really close teams this year and wouldn’t trade it for anything.”

Senior Jordan Helmbrecht: “The word team, to me, means always having someone to have your back, and always having someone else’s back. The word team means that you are never alone in any battle you are facing; it is like being a part of a family. I have been a part of a team since I was little, and while it introduced me to many people that I now get to call my friends, it also showed me the importance of being there for others and having others there for you.”

Senior Jay Wiener: “What the word team means to me is that it’s a collective group of individuals who have broad and specific goals that each member strives for. Whether that’s on a basketball team or a classroom, each person tries to help out others for a common benefit.”

Senior Ella Kelly: “A team is a group of people who work together while supporting each other, but it’s more than that. Being a good team requires a lot of trust, so you get to know your teammates quickly and you become a lot like family. I think that being part of a team has made me a better person. It has helped me learn how to work cohesively with other people and has taught me to be unselfish because when you are part of a team, you need to understand that working together is the best option.”

Junior Jonah Spates: “This past sports season really showed me what a team truly is. A team comes to practice every day and pushes each other to their full extent. Our basketball team this past year was really, really close from summer camps all the way up until the last game. This group of guys showed me what a true team is all about; doing everything as one cohesive group no matter what. I was truly blessed to be on a team that was that close and am looking forward to my future sports.”

Junior Elisha Strawser: “People say there is no ‘I’ in team, and I truly believe that. A team supports you when things aren’t going as planned, and they help you up when you fall down. A team represents unity and cohesion. A team doesn’t give up on one another because if they do, things would fall apart. A team trusts one another and fights as hard as they possibly can for each other. Being part of a team has helped me find who I am, helped me become more humble, and made me a harder worker.”

Junior Dallas Hopson: “The 2019-2020 basketball team really showed me what a true team is. In my opinion, a team is putting aside your own self-interests in order to do what is best to win. After the loss to Rockford, everyone was super emotional which showed how close we were as a group of guys and also allowed us to be as successful as we were.”

Junior Whitney Currie: “Team means simply to me together as one. You may come from different backgrounds, have different futures, go to different schools, and have different lives, but when you come together, you all have one goal and give everything you can to benefit the people supporting you. Being part of a team has shown me that working together can lead to much better things than only worrying about yourself and what you want.”

Junior Cam David: “A team is a unit who works as one and puts all their personal beliefs aside and does what is best for the group. In practice, we would show this a lot as every single drill would be highly competitive which helped us succeed when it came to game time.”

No matter what “team” you are a part of, you come out with the same benefits. Being part of a team deeply impacts anyone that is a part of it. Sports are so much more than just games to pass the time; they create a sense of unity, the feeling of excitement and defeat, amazing friends and opportunities, and memories that stick with the players for life. A team sport isn’t just some hobby, it is a second family.