The Central Trend • May 4, 2020 • https://thecentraltrend.com/86323/opinion/hannah-raven-fish-created-a-world-of-depth-with-her-ep-the-sky-is-falling-down-on-santa-barbara/ 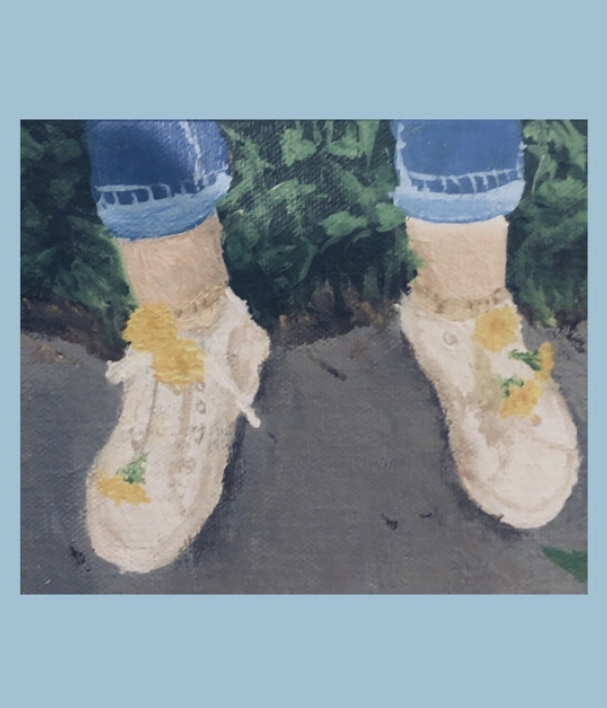 When I first met her, Hannah Raven-Fish was a summer stranger whose laughs flirted with the breeze.

She then became a shoulder to cry on, a fellow body to eat vegan pasta with, a hug and a smile on the ‘Brava beach.

And while she may be thousands of miles away from me now, residing in the sunny Santa Barbara, California, she’s still that friend and now one of my “recently listened to” Spotify artists. That’s quite a change, right?

So this review is a little different; it’s a little more intimate, unique, thorough, complex, intricate—you name it. Certain sounds, notes, lyrics bring me back to our shared memories abroad, where we were lucky enough to spend a month mastering the Barcelona metro and culturing ourselves in Spanish cuisine.

Her debut into music didn’t surprise me; that’s the Hannah I had learned on those late-night subway rides or early morning class meetups. The Hannah who bought a guitar in Spain. The Hannah who played the ukulele in her host family’s apartment. The Hannah whose parents came to rescue that guitar and bring it back to the States.

She is walking music, humming here and there, and now she makes it under the artist name ravenfishie.

Through this, I have the privilege to share the Hannah I know to the world, or rather the width of said world The Central Trend reaches. From our shared excitement over bands we both loved, songs we couldn’t shake, I knew long before that her first EP The Sky is Falling Down on Santa Barbara was going to be something that would embody those summer sunsets and sangria we shared.

“Wrapped Up” starts off the EP, and it brings me back to when the sky kissed the horizon in Spain. The song fills my room with an enriched yellow daze, daring me to dream again. It begins with a slow, softened strum of a guitar, and then Hannah begins to sing.

Her voice is unrivaled, nonpareil, raw.

She meshes with the guitar to weave a softer song—nothing too erratic or absurd. It’s a feel-good song packed with subdued emotion as Hannah sings “venom’s sweet but you gotta watch your own back.” The yellow clouds in my vision take on a blue appearance as she elongates words like “everyone” and “world” when saying she’s “wrapped up in [her] own problems,” and I feel like I’m in a creek, bouncing from log to log.

As she croons simple yet melodic ooh’s, “Wrapped Up” wraps up to be a polyphonic perfection of childhood nostalgia. It’s a song I wish I could touch—hold close to my heart.

And without fail, I feel that same sentiment when “For Her” played next, jumping straight in as Hannah starts with a mellow “I’m scared to talk to you,” confiding in the listener as if whoever on the receiving end is a close friend.

On this song, she picks up speed, rhythmically pacing her words to land with her guitar beats. With perfected lilts and tilts to her voice, “For Her” sends rays of rose and ruby into my world. I feel nostalgic about a time I’ve never had—of love and sonorous laughs. The world dims a little as Hannah powers through the song, layering more and more of her ethereal voice.

I feel free. I feel spring despite being locked in the house. I feel enamored and hopeful and liberated.

“For Her” just makes me listen to my body, to the world; it’s an ignition into a mountain of much more, and my favorite part? All 2 minutes and 27 seconds of it, and I mean it in the least cheesy way.

I hate to say goodbye to the love and liberation of “For Her”—a song that builds a future after a wave of nostalgia—yet I love the hello her final song “Love Ain’t Free” starts with.

It’s different, strumming onto a whole new path from the previous two songs, yet the flow of the songs is nothing but cohesive. As the pop pink world closes with “For Her,” slices of sapphire and jaded moss green open my ears to the range of styles Hannah is capable of with the start of “Love Ain’t Free.” Moving from nostalgia and a “perfect” world where you play the songs as you fish in your childhood creek, a reclamation of reality occurs within her last song.

Dynamic, clean, eclectic—this song is an experience that I can’t get out of my head.

I don’t know the words, quite frankly, to describe what I feel. I’m empowered to own myself, my emotions, my good and bad; it’s the acknowledgment of the teen experience being a battle, being imperfect and not always the 2000’s movie graduation with our high school sweetheart scene we’ve been promised.

There’s so much to dissect—to devour—as Hannah’s signature soft style curls against the lace of vengeance, of pain, in lyrics such as “There’s blood dripping down my crimson road/You watch it dribble and hope I choke.” It’s a display of her talent within her raw, clean verses, and I’m filled with awe. It’s so, so, so good; there are no other words.

Ending it all with an unfiltered “love ain’t free” one more time, the EP pauses, saying goodbye to the world it brought me in. And I don’t want it to leave.

Everything about this EP was new in that world, yet it felt like an old friend walking down the street with me. I was brought to a yellow sky, a pink galaxy of affection, an uphill blue battle with life because of Hannah’s very own words and chords and talent and personality that molded the EP to perfection.

I was brought to reminiscing on the better Barcelona days and to a life of love I have yet to live, and to put it in her own words, I felt the “teen experience” that brought The Sky is Falling Down on Santa Barbara to fruition.

With just over eight minutes of music, it’s a hypnotic indulgence—a blessing to whoever clicks play next.

So thank you, former stranger Hannah, goodbye-hugs-in-an-airport-bathroom Hannah, and most importantly, virtuoso Hannah who has strung me along for three tender, timeless songs.