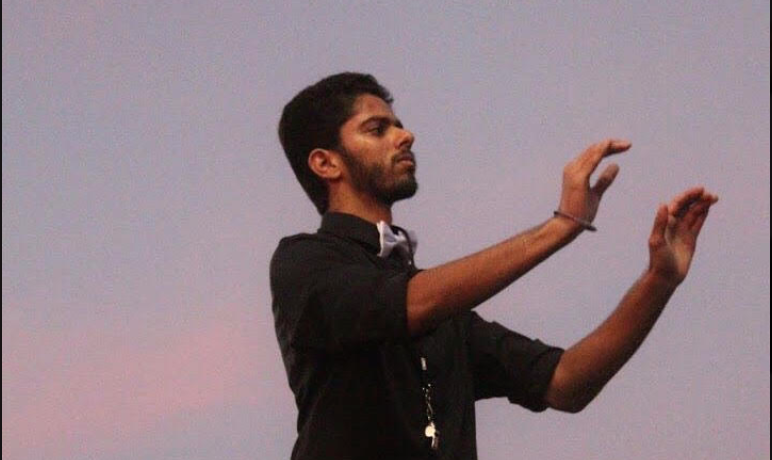 1. How have you been practicing outside of school? How do you conduct, too?

“Following the beginning of quarantine, I went to the school in order to retrieve my belongings as well as my instrument. With that in possession, I’ve been able to practice at home. I have practiced by working on a solo piece in addition to occasional assignments from [marching band director and band teacher Laura Zilhaver] through Google Classroom. Since we have begun preparing for the marching season, [Zilhaver] has sent out the sheet music for our halftime show that I’ve been able to print out and practice. In regards to conducting, I will begin working on our show music once the full scores are sent out. In the meantime, I have taken advantage of online resources and organizations that offer free lessons through Zoom. With these calls, I can continue to practice my conducting and improve certain techniques.”

2. What alterations had to be made for leadership auditions in band?

“Without the ability to be held in person, the audition process occurred through a virtual setting. The marching portion of the process was completely removed as the audition consisted only of answering a set of written questions and an interview on Zoom with [Zilhaver]. The playing part of the audition will still be held, but [now it’s] in person at band camp. While the leadership team will already be set with the previously mentioned requirements, the playing still acts as the final assessment for the students. Anyone auditioning for drum major goes through the same process, but they must also record themselves conducting last season’s opener “I Don’t Care” [and] email [it to Zilhaver].”

3. Do you think the new audition method is a true testament to the student’s talent and ability?

“The change in the audition process has both its pros and cons. The inability of a student to display their marching skill is definitely a negative of this new audition process. Marching is a large portion of the audition process; so, in its absence, a greater emphasis is put on a student’s leadership philosophy and abilities through the interview. That being said, the marching a student has displayed throughout the season is still taken into account when they audition, so they always have a chance to prove themselves. While I believe this audition method may not illustrate all the abilities of a student, there is still a fair chance for a student to achieve a leadership role through their constant displays of determination and attitude.”

4. How has not being in a structured band-dedicated hour every day affected your relationship with music and your instrument?

“Without a dedicated hour to band every day, I’ve been inconsistent with my practicing as my mind is fixated on my AP exams. While I do find time to practice and work on band-related tasks, those are all in the background of my main concern, [which is] school. Once the climax of exams is over, I’ll have more time to commit to the band and further develop my relationship with music.”

5. What changes do you expect to see this summer and next fall with marching band season coming up soon during a pandemic?

“With the pandemic still ongoing, I’m not certain as to how this season will pan out as we await further news from administration regarding school and fall activities. As of now, we will hold our summer activities as planned, and I can only hope that the rest of the season remains unaffected. ”

6. What will band camp look like? What are your feelings toward any changes?

“The biggest change brought by this pandemic is the cancellation of our traditional band camp. We will no longer be attending Western Michigan University; instead, we will hold camp at FHC. Band camp will be held on campus during the day with the students going home overnight. Specifications regarding this change have yet to be announced, but we will retain the core aspects of what makes band camp so enjoyable, such as the evening activities. This change has been met with many different feelings from students and my own classmates given that it will be our senior season. While this change is unfortunate, I have come to terms with it since there is nothing I can do about it. It’s sad to think I won’t be able to experience my last band camp under normal circumstances, but I won’t let that keep me from enjoying it to the fullest.”

7. What do you miss most from not being in band class every day?

“What I miss most about band class is being able to see my classmates and the social aspect of the class. In addition to playing pieces, a plethora of jokes and silly comments are made among my trombone section and others. There’s a certain joy that comes from being in that class, and the credit [for that] definitely goes to the people that it consists of.”

8. Has this pandemic and quarantine affected your motivation or drive in band? If so, how? Or has it made you more motivated in hopes of being on the field next year?

“The pandemic—along with its quarantine—hasn’t negatively affected my motivation with the band in any way throughout this. As we prepare for our marching season, my focus remains on the show, camp, and how we can move forward after this is over. If anything, our current situation has motivated me to make this upcoming fall the best season we’ve had. I am still committed to my goals regarding both the band and me, personally. With this determination, I hope to have a successful season regardless of any obstacles that may present themselves.”