The Central Trend • May 10, 2020 • https://thecentraltrend.com/86464/opinion/upload-created-a-surprisingly-entertaining-idea-of-the-future/

Upload created a surprisingly entertaining idea of the future 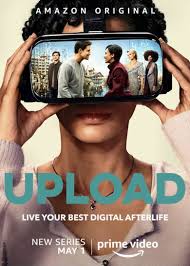 We live in a world that is immensely dependent on technology. There are countless movies that even find a way to completely submerge the characters into their technology as a way to remove them from the worries of the real world: Jumanji, Ready Player One, Tron, and so many more.

They all follow a similar theme of entering a completely different reality before going home moments later. One new Amazon Original series, however, found a way to escape what is known as normal in the production realm with Upload.

Upload follows Nathan Brown (Robbie Amell) as he chooses to be “uploaded” moments before death. Uploading allows a person to enter virtual heaven rather than dying. It allows uploaded people to maintain interaction with living people as well.

With the help of his prosperous girlfriend Ingrid Kannerman (Allegra Edwards), Nathan is capable to be uploaded to the most expensive heaven. When Nathan is uploaded, he meets Nora Antony (Andy Allo). Nora is Nathan’s angel; she assists him with any questions he may have about his virtual heaven.

The plot of Upload seems very light-hearted and comical at first, but the accident that caused Nathan’s death soon seems to be more than an accident.

The unraveling mystery is unpredictable yet entertaining; however, it was also unsettling at times.

The technology advancements created in Upload are relatively similar to those of Ready Player One. Virtual reality headsets and sensitivity suits allow their users to be completely engulfed in a separate world. Quite frankly, the idea of it is a little disturbing.

Possessing an uploaded life seems so much more appealing than merely living a typical life. There are so many perks in each of the heavens that people can choose from, and it makes it feel like life only occurs so people can be uploaded. Uploading takes away the true purpose of life.

However, as much as the idea of uploading provokes me, Upload essentially did an incredible job making the story believable. Upload takes place in the year 2033. It is far enough in the future that the technological advancements created in the show seem remarkably realistic, yet they are not blown out of proportion.

Technology is not the only futuristic idea that Upload chose to make, though.

In the series, we discover that Nora’s father, Dave Antony (Chris Williams), is diagnosed with a sickness called “vape-lung.” The prediction of this disease becoming a real thing makes the show seem even more realistic.

Even though the first season of the series was short, it was still difficult to take my eyes away from my screen.

Upload is a refreshing step away from the unrealistic expectations of the future of our world, and I have high hopes for the next season.