The Central Trend • May 26, 2020 • https://thecentraltrend.com/86755/opinion/netflixs-new-rom-com-the-lovebirds-lacked-any-originality/ 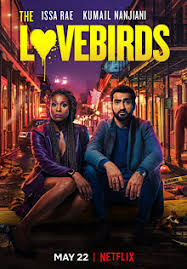 After noticing Netflix’s new film The Lovebirds on the list of the top ten movies on the platform, I decided to see what the rom-com was all about. After getting just a few minutes in, I found the film to be a cliché, lackluster comedy that failed to hold any originality.

In the film, Leilani (Issa Rae) and boyfriend Jibran (Kumail Nanjiani) are quickly heading down the road to a breakup. After fighting for months on end about every detail of their lives, the two are constantly fighting against one another and their beliefs.

While in the midst of a heated argument regarding marriage and the future, the two find themselves in the middle of a bizarre murder mystery. In an attempt to clear their names and remain out of the spotlight of the murder, they find themselves on an interesting adventure in order to survive their night and keep their relationship alive.

Directed by Michael Showalter, the film lacked any originality and seemed to follow the most basic guidelines for a romantic comedy. There was never an element of surprise as I felt as if I knew what the pair’s next move would be minutes before any event occurred.

Not only was the plot simply mediocre, but the attempts of humor and comedy were poorly played out by the main characters. Every line and joke spoken by the struggling couple felt as if it was being forced out of their mouths; their ability to play the quirky and unique couple certainly fell short of where I would have wished for it to be.

As the movie rolled on for about an hour and a half, I found it to be strikingly similar to Netflix’s film from 2019, Murder Mystery. Staring well-known actors including Adam Sandler and Jennifer Anniston, Murder Mystery is simply a much more original and captivating comedy than The Lovebirds. With acting that did not make me want to turn off the TV, Murder Mystery certainly should have been Netflix’s final comedic mystery produced.

The deeper I fell into the plot of The Lovebirds, the more I found myself confused. The fast pace of the film was difficult to follow, as the decisions made by the characters did not allow for the audience to have any time to pick up on what had just happened. Rather than allowing any time to grasp an understanding of the plot, the characters would quickly make their next move and leave the previous scene in the dust.

Throughout the film, I found it difficult to remember the original reason the couple was facing the murder in the first place. The director failed to keep the aspect of their love and romance alive, so the film often simply felt like two friends attempting to flee a murder scene. Instead of allowing the relationship to develop between Leilani and Jibran, the director truly left their relationship up in the air.

With endless free time on my hands, I once had believed that taking the time to view The Lovebirds would be an entertaining source of comedy for my day. Unfortunately, the film simply failed to entertain me and did not allow for me to have a break from my boredom.