The Masterful Work of Wes Anderson 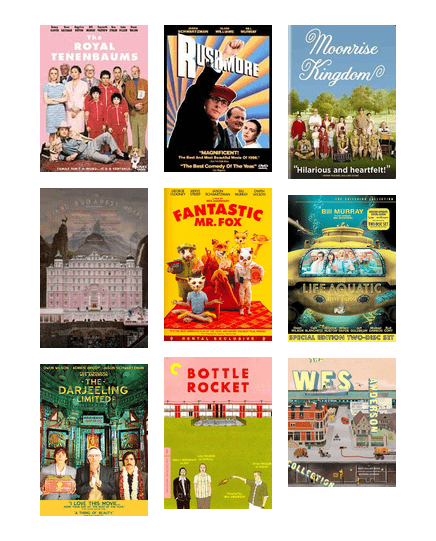 Wes Anderson is one of the most prolific directors working today. His command of the camera and offbeat style continues to inspire and amaze moviegoers, building upon itself with each movie released while never feeling self-indulgent.

Anderson’s style is one of the most distinctive in cinema, and it is what brings many people back to his movies. There is something special, however, in his movies that I find far more impactful than the symmetric frames or vibrant colors.

Wes Anderson is a master of theme.

Inside of his stories that have the feel of a fairy tale, Anderson examines many complex ideas in his stories, often focused on loss and the worlds that we create around us. They are bittersweet and often dark, despite the fantastical visual and comedic merits of these movies. Four of his movies display this masterfully.

The Royal Tenenbaums is a dark comedy about a dysfunctional family of geniuses. This is a semi-common trope, but the trope seems to be inspired by the success of this critically-acclaimed indie film.

The movie as a whole contains a relatively simple and ever-present theme of failure and redemption. This theme, unlike the others, is not easy to miss, and every event, action, and character is designed around this idea of a person who’s past failures have brought them to a very low place—a place where they try to find a way to redeem themselves, or at least find a reason to keep on living.

Oftentimes the past failures of these characters are played out for comedy, as well as their distinctive personalities, which range from an oblivious jerk of a father to a withdrawn, depressed tennis star.

Despite some of the comedy found in these characters’ situations, the core of this story is a thought-provoking study of people recognizing they need help and trying to right their past wrongdoings. Each character is forced to look inwards and contemplate their lives to see where they have fallen and to see how they will rise back up, crafting a compelling plot veiled in sadness and hope.

The Grand Budapest Hotel is my favorite of the Wes Anderson movies and for good reason. This is Anderson at perhaps his most precise, his most artistic, and his most hilarious form.

Although the jokes and style come non-stop, the fast-paced narrative does contain one of Anderson’s most subtle and profound themes. Inside a story about a wild dash for an inheritance, a charismatic hotel manager and a new lobby boy are a display of the loss of culture and the fight of a man to keep his world alive.

The display of loss is common in Wes Anderson movies. While this story focuses on loss, it is not the loss of a person or place as is typical in his movies. It is a loss of the idea of the world the main character, Mr. Gustave, holds.

Mr. Gustave lives in his own world, focused on his hotel and the perfection of everything he sees while also seeking the affirmation of the many guests he serves. He thrives in the world he has built around himself, but this world falls apart as a war and conspiracies unfold throughout the narrative.

Along with the stunning visuals and stylistic humor, this movie finds a way to fit a sensitive story of the hopeful and civilized worldview of a man clashing with the wholly uncivilized world around him. This subtle theme is surprisingly effective and present throughout.

Fantastic Mr. Fox is one of the most potent examples of deeper subtext inside stylistic and action-driven distractions. The PG rating and “kids movie” context of the film prompts adults to look down on it and ignore what is actually a mature marriage subplot and story built around embracing one’s identity.

The premise of all the characters being animals provides a great visualization of this identity theme as these animals that act as humans—complete with mortgages, newspapers, and lawyers—have to contend with the fact that they are wild animals, and no matter what they do, they will always be different, and it will be in their nature to act this way.

Mr. Fox is a self-centered and charismatic main character, driving the plot forward through his successes and his failures. Despite his best efforts, he finds that no matter what he does, his scheming life is one he cannot escape. His identity as a character is explored fully, creating the theme as it develops.

Overall, Fantastic Mr. Fox takes themes about the inescapability and positivity of identity and fully fleshes them out inside of a seemingly shallow stop-motion kids movie.

As I said earlier, most of Wes Anderson’s movies are about loss, whether it be a person, place, or idea; however, in Moonrise Kingdom he explores the idea of creating a world of your own. In this movie, two kids run away and camp in the wilderness while the island’s residents try to find them.

As the kids run away, they’re escaping their lives—the ones they see as monotonous and full of sadness. Their family lives have fallen apart, and they look for an escape. They adventure into the wilderness to seek this escape by living alone, making their own home where they don’t have to deal with the suffering of their lives back home.

Their whole journey is spent running away and trying to settle in a place where they can find this escape. However, obstacles never stop coming, and they are forced to constantly keep up this never ending pursuit of an idea. The idea that they may find this escape from all their pain one day.

This pursuit of a world of your own is the central theme of the movie, and it forms the heart of the story. The two kids have this goal the whole movie and it is resolved masterfully by the end.