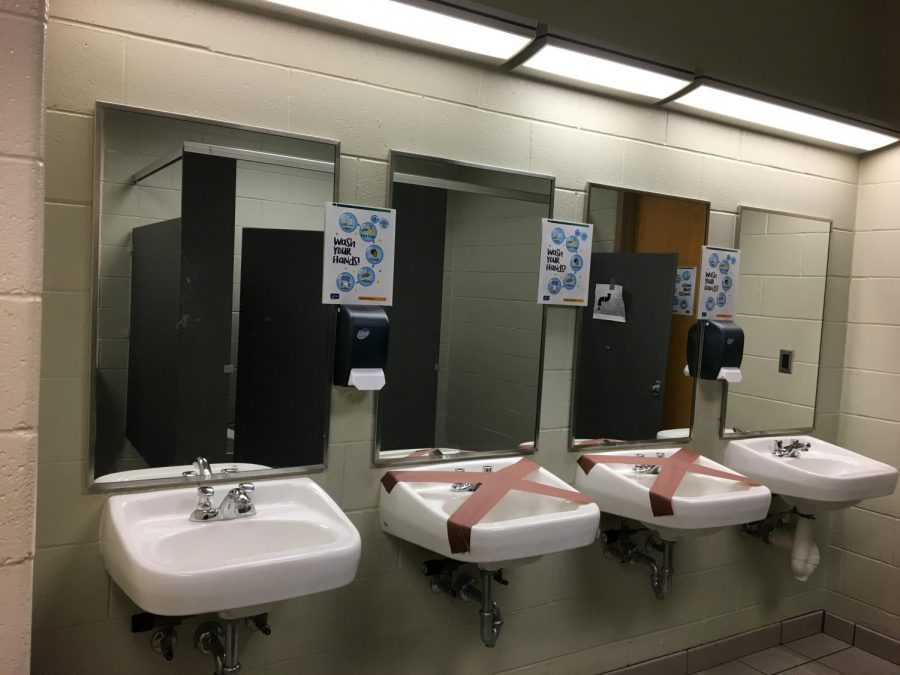 For students and staff alike, the school population has noticed that Forest Hills Central High School looks different this year; everyone seems to have distinguished these dissimilarities differently. Many observed that, for the first time in a long time, the hallways no longer seem to be absolutely teeming with students. Some may have noticed brown tape decorating school floors to promote social distancing, as well as tape restricting bathroom sinks to mandate safety measures. Others are simply yearning for the day they leave the classroom to return to the cafeteria for lunch.

Everything has changed, and the sanitation policy is no exception.

These changes include improved and updated equipment for the custodian staff like the Clorox 360 which is a machine that releases an antibacterial mist that disinfects surfaces and kills bacteria within moments of impact. Other additions to the sanitation policy include, but are not limited to, additional hand sanitizer stations located throughout the school, Plexiglass dividers in the office to keep germs from outsiders at bay, mandatory desk-disinfecting after use, and restrictions on who is allowed to enter the school. Of course, there’s also required mask-wearing and social-distancing with no exceptions.

“Conversations [about sanitation] started even before school was closed,” Morse said. “I think that we started hearing about what was going on out West and internationally, [so we were] anticipating that something was going to eventually get here. I want to say two or three weeks before we closed, we really started trying to focus on reminding students to wash their hands [and] those kinds of things.”

Though members of the administration like Morse were the ones who created the new policy, they are far from the only ones being affected by it.

Jeff Tolar is perhaps one of the FHC staff members who has been most impacted by the new procedures put in place. As head custodian, cleaning, fixing, and sanitizing are his areas of expertise, and this year, he has overcome the challenges brought by the new procedures with grace and ease. For Tolar, he’s barely even phased by the changes.

What he does think about, however, are the changes in others.

“We [as custodians] feel appreciated because we hear it all the time,” Tolar said. “[When we’re] walking down the hallway, somebody [will] ask for something and thank us, or they’ll just say, ‘Hey, I notice you did that. Thank you.’ It’s not something we look for, but it’s nice to hear.”

For second-shift custodian Vickie Miller, what she misses most about previous years are these types of interactions that Tolar mentioned. Due to the new rule that students aren’t allowed in school past 2:40, Miller’s day-to-day interactions are much different than what they used to be.

However, Miller still manages to be thankful for the students even if she isn’t seeing them in person.

“I’m very impressed with how clean the kids are keeping things,” Miller said. “It’s a lot different than last year. I think that may have something to them being more appreciative of what’s going on with this situation. But, I do have to say I miss people in the afternoons. I miss seeing [the students]. No one’s around—it’s quiet!”

Due to the current situation, everyone has realized how crucial the custodian staff is to the school. In just one week, the appreciation for the custodians has changed monumentally. With students leaving things better than they found it, everyone has found a way to help.

Despite the added help from students, however, the custodians still have their hands full with work that needs to be done. Aside from the “three basics”—bathrooms, trash, and vacuuming—the custodians have the additional task of sanitizing practically every inch of the building. Because of this extra work, the custodian staff has begun to apply new collaborative techniques.

“We have three shifts of people, and every shift [sanitizes] doorknobs and other [high-touch points],” Miller explained. “There are two people on first [shift], three of us on second [shift], and then only one on third [shift]. Everybody pretty much has their own area to do, but everybody chips in and works as a team for whatever needs to be done. It works out well, [and] we’re making it work.”

Tolar has also played a part in the newly-implemented collaboration.

“Traditionally, we all have our designated areas,” Tolar said. “One person will do the athletic area, one person will do half of the upstairs, [and] the other person does the other half. We’re still doing that with a slight difference of blending our areas together to help each other out a little more because of the extra sanitizing.”

Togetherness has been a huge part of the Forest Hills Central community for a long time, and the emphasis on working together has only gotten stronger this year. Other than custodians working side-by-side, students and staff have found a common goal to work together toward that doesn’t entirely have to do with education: following the new rules put in place to keep everyone safe.

Morse has been one of the staff members who has seen this goal-oriented cooperation firsthand.

“I think [the first week] has gone really well,” Morse said. “From what I’m hearing, students want to be in school, and they want to be in school full time. I think that they know that they have to play the game a little bit. That includes wearing your mask, cleaning your hands, not being too close to one another. So students have really pleasantly surprised me [by doing that].”

Morse hopes that this increased sense of togetherness and focus on cooperation will continue throughout the school year because, after all, we all have the same goal.

“What we all want is to be back in school full-time, and we all have to be on the same page [for that to happen],” Morse said. “I’m very impressed with the grace students are giving one another as well as to the teachers and staff all around. Having grace with one another and having respect for other people is going to get us a long way.”