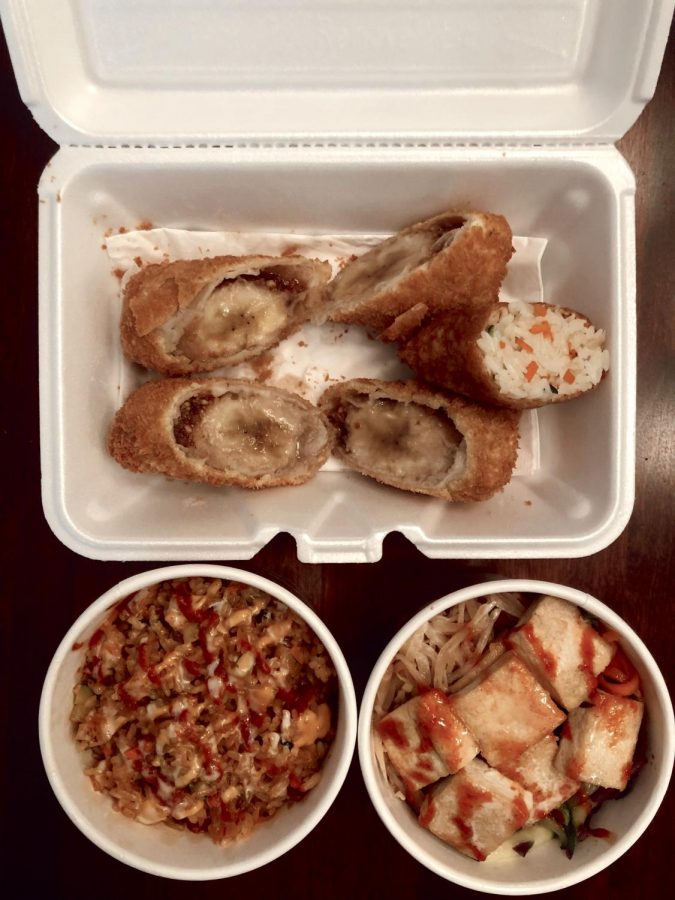 My first day of school—my first day back after months and chaos and quarantine—included too many lasts. Far too many lasts for someone who can’t read the last chapter of books because it hurts to part with the story.

So, that unwillingness to say goodbye when it isn’t convenient for me may explain why I found myself in my old job’s parking lot—a job I still mourn and miss—the day that followed so many lasts.

And it may explain why I searched for an outlet while sitting in my car, letting everything sink in, and found myself in FireFox Korean Special Food’s parking lot.

I can’t exactly explain my reasoning for why I pulled in there—maybe the sleek building called to my subconscious or my hunger was enticed by the prospect of Korean food—but it must have been a powerful pull by my mind or stomach because they had no pull-through parking, and I’m a pull-through parking only type of girl. So to compromise on that means a lot.

Keeping COVID-19 in mind—and my innate awkwardness and inability to look over a menu while a worker watches me causing me to rush my order and end up hating my food and the price—I stayed in my car to look over the menu. But because of FireFox, the name of the restaurant, also being a widely used search engine, it took me a handful of minutes and a lot of patience to find the online menu.

By the time I found the menu, I realized that it had been on the door; it was right behind me the whole five minutes I spent waiting for my T-Mobile data to pull up Safari, so do with that what you will.

The menu was expansive, to say the least, especially for someone like me who has never had Korean food. From stone bowl bibimbap to sam-gyeop-sal, it’s safe to assume that I was confused; I don’t know much about traditional Korean food, but not a single thing appeared disappointing. FireFox covers all the bases with its colorful pictures of food and easy-to-read menu: soul-burning kimchi fried rice, ten different varieties of ramen and noodles, and even mouth-soothing mochi and seaweed salad.

My indecisiveness—and general confusion/lack of knowledge on the food—led me to order quite a lot for just myself. I placed an online order, an option I’m grateful they have in our current world, of kimchi fried rice ($7.95), a traditional Korean rice dish called bibimbap with tofu ($7.95), one tofu pocket ($2.50), and a banana roll ($5.50)—the item I was most excited for because, in all honesty, what does banana roll even mean? But despite all this food, the bill was relatively low, coming to around $28 with a small tip.

My order was quoted at a 20 minute wait time, which, when avoiding emotional responsibility, went quickly.

When I went in to pick up the food, a friendly man greeted me, excited to hand off the food and a free drink. The interior was sleek, spaced out, and suited to the outside—a definite overhaul from the restaurant it was beforehand. The workers were friendly, saying goodbye after I thanked them, and the interaction was short and sweet.

The drive home, after somehow backing out of my parking spot, was the opposite: about 20 minutes long and 28th-street-scary.

But because of this drive, I was undeniably excited about the food. Not only was it new to me in general, but the variety in flavors and the ability to cater to my vegetarian needs are hard to find in local restaurants. With the food still steaming as I pulled the containers out of the brown bag, I dug in.

The tofu pocket was unlike any version I’ve had before; instead of just being a sweet tofu shell with rice, FireFox added vegetables, making it a sweet and savory combo that only took two bites. The other handheld item—the one I was most curious about and far from disappointed by—was the banana roll, and the combination of the ripe, sweet banana and the breaded crust around it created a magnificent mosaic of candied confection.

Moving on to the entrees, I took one bite of the kimchi fried rice and immediately drank half of the free lemon-flavored drink the FoxFire worker handed me. It was eye-opening, tongue-burning, deep-breaths-inducing spicy; I am not one afraid of spice—I like tabasco and sriracha—but this rice was vehemently fiery yet intensely flavorful. I went back, bite after bite, like a toxic relationship, to the kimchi fried rice, even bringing some to school the next day.

I started on the tofu bibimbap after the rice, tongue burnt and all, and it was a refreshing change—a revitalizing medley of rice, carrots, mushrooms, other vegetables, and tofu. The flavor was immaculate with each part of the bibimbap being lightly coated in a piquant sauce, and the textures of the soft rice and tofu and structured vegetables combined into a farrago of flavors.

Each dish had a unique taste that stayed with me—whether that be from the newness of Korean food to me or the delicious dishes from FireFox, which I believe to be the latter. And each dish was worth it, even making for envy-inducing leftovers at school.

These unparalleled flavors, especially for our area, made the drive—and non-pull-through parking hassles—worthwhile, leaving a lasting impression, specifically on my cravings.