Work It is surprisingly relatable 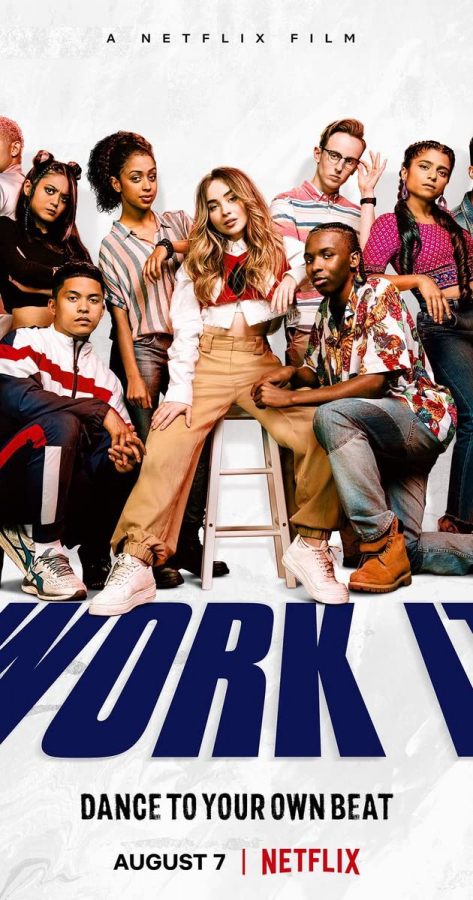 Copious people have that actor or actress that they would instantly fawn over if they met them. I never understood how one person could have so much power over someone else’s life so easily, yet even I have that type of person in my life—Jordan Fisher.

Fisher is, in my opinion, the definition of a triple-threat: his singing is angelic, his dancing continues to amaze me, and his acting captivates me every time he appears on my screen. Though I have only been a fan of Fisher for a couple of years, I was ecstatic when I saw he was joining the cast of the new Netflix original movie Work It.

Work It follows high-school senior Quinn Ackerman (Sabrina Carpenter) on her trek through her final year of school. As Quinn applies to college, she discovers her applications lack personality. After a slight misunderstanding with an admissions counselor, she decides her only option is to join her school’s dance team.

However, Quinn quickly finds herself facing a major problem: she doesn’t know how to dance, yet she is not about to let that stop her. Quinn chooses to audition for the dance team, but it is no surprise when the captain of the dance team, Isaiah (Keiynan Lonsdale), rejects her.

Quinn remains persistent, though, and decides to form her own team. With the help of her best friend, Jasmine Hale (Liza Koshy), enough people are brought together to form a team. Everything seems to be running smoothly until they realize they are missing one key piece of the puzzle—the choreographer.

Since Quinn’s dance team would have to compete against the other, more skilled, dance team at her school, she knew they would need a stellar choreographer. After hours of research, Quinn finds retired choreographer Jake Taylor (Jordan Fisher).

It seems obvious that Jake is her best option, but it takes some convincing.

Though everything eventually falls into place, the team, as predicted, finds themselves facing obstacles; however, even with the predictability of the movie, Work It managed to surprise me.

The level of connection I was able to form with the characters drew me into the plot more than I imagined it would. As I face the end of my high-school career, I understand the pressure Quinn faces to make her college application stand out.

The timing of the release of the film also formed a more relatable connection between the characters and students since many high schoolers are starting school in the fall. The sequential plot puts the viewer in the shoes of the characters that find themselves preparing and working through the school year.

However, there are moments in the film that seem to be missing information. The character development of Quinn Ackerman is difficult to piece together at times due to the lack of information on her father. Her motivation throughout the film lies solely on the dreams of her father, but that lack of knowledge makes it arduous to understand her motivation.

I also wish the movie elaborated on Jake Taylor’s backstory. Similar to Quinn, his motivation lies in his past, but the viewer knows very little about it.

Though filling plot holes can seem repetitive, it is the only way to truly engage the viewer.

But, despite those plot holes, the pop-culture references and timing of the release of Work It created a world that was easy to escape to and enjoyable to watch.