Racing Towards her Goal: Step by Step 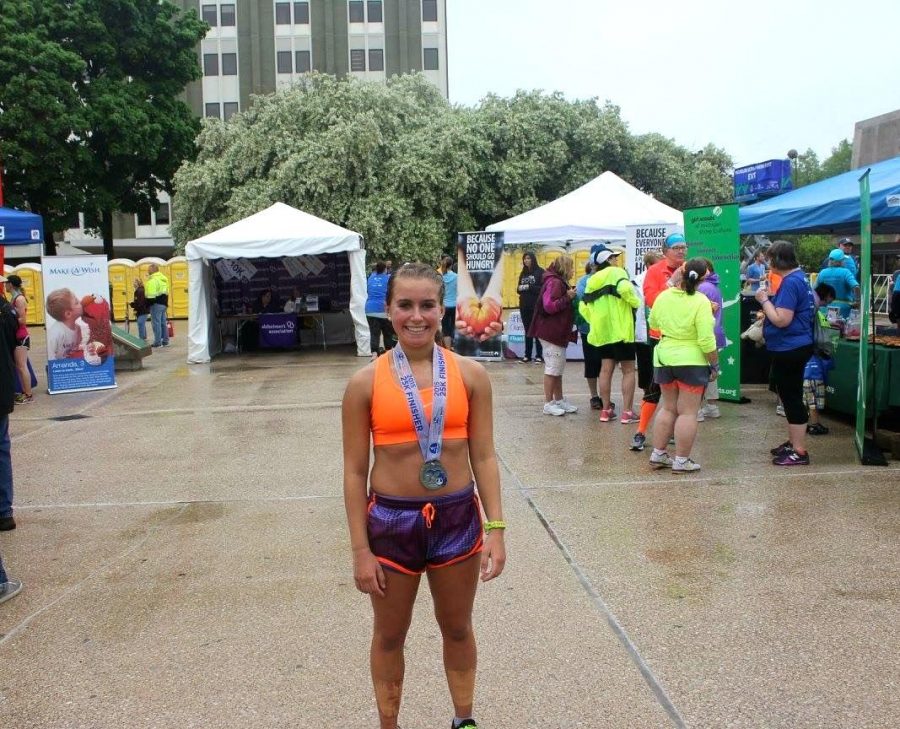 On May 9, 2015, more than 21,000 people gathered in downtown Grand Rapids to run in the 38th annual Fifth Third River Bank Run. One of those people was Katie Allen, a sophomore at FHC whose love for long distance running and dislike for track influenced her to sign up for her first 25K.

Allen is on the Varsity Cross Country team and ,up until this year, a member of the track team as well. But instead of doing track this year, Allen decided that she wanted to run a 25K. In order to prepared herself, she started a 10 week training program with trainer and family friend, Joel Harner, who also shares a love for long distance. Family and friends were not surprised by this decision, since Allen has always loved running long distance.

“When Katie said she wanted to run a 25K I was not surprised at all,” Katie’s mom, Sara Allen said. “She has always loved to run long distance and once she sets a goal, she doesn’t give up.

Katie set a goal at the beginning of her 10 week training. That goal was to run her first 25K in under 2 hours. Harner explained that the key to achieving her goal was to have the training building up to the race be quality miles but at the same time reduce these miles for her Cross Country sea. This would prepare her for for both the race and so she is set for a great training base leading into her Junior Varsity Cross Country season.

Harner would send Katie workouts every Sunday with specific pace targets and what strength exercises he wanted her to focus on for that week. They also ran several long runs together and pushed each other, since Harner is a runner as well.

“The main focus was cross training with her bike so she would not put so many miles on her legs,” Harner said. “She did a great job at hitting her pace goals especially for her long runs, which helped her during the race.”

“We supported her anyway we could,” Sara said. “On the days when she was running far, her dad would bike along side of her because we didn’t want her running by herself.”

When the day came to race, it was raining. This  utterly disappointed Katie and many other runners, but it didn’t take away the excitement of the race. According to Sara, it was a lot of fun to watch her even though it was raining.

Although Harner couldn’t be there for the race because he was in Detroit with the FHC Crew team, he was in contact with Katie the days before the race and he was sent a message after she finished. Her goal was to go out with the 7:30 per mile pace group and she executed the game plan perfectly.

Harner believes that the reason Katie was able to achieve her goal was because she is great at running a consistent pace, which allowed her to stay relaxed and fresh for the last five miles.

Katie, with the help of my friends and family, reached her goal and finished her first 25K in 1 hour and 58 minutes. Not only did she reach her goal,but she finished first in her age group, of 14 to 19 year olds, earning her a medal to go along with the self accomplishment.

According to Katie, cheerleaders and people on the sidelines helped encourage her during the race. Katie also stated that she probably will do another 25K.

“I like having a goal and because I am not a huge fan on track,” Katie said. “This is a goal that I wanted to achieve.”

According to Harner, along with this strive to reach her goal, Katie is a talented runner who makes coaching  easy, as she is always telling Harner how she is feeling so they can adjust her training. He looks forward to working with Katie and the rest of the FHC Cross Country team this upcoming season, as he will be a volunteer coach for the team.