The Stadium Renovations have caused complications for fall sports 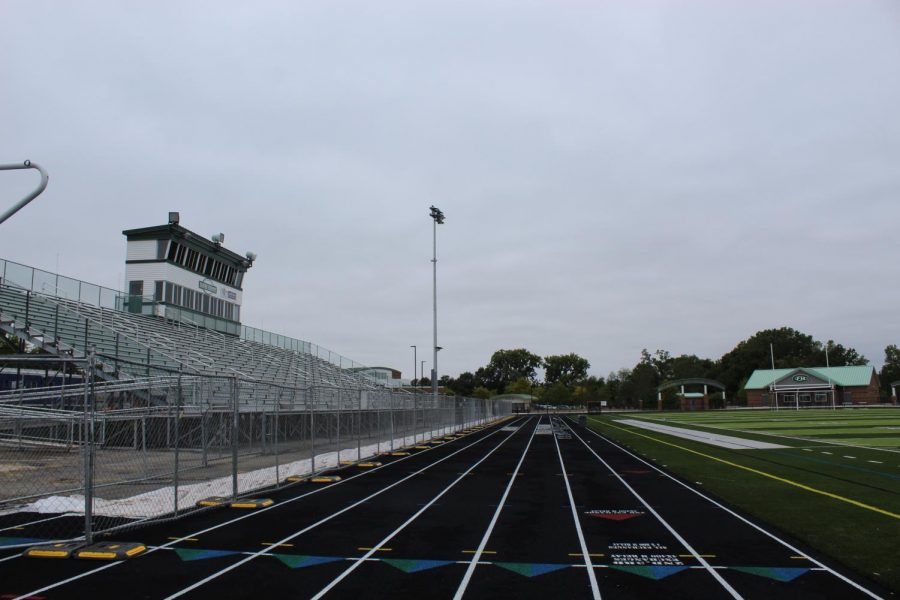 Senior Carson Deines has spent years preparing for the final moments of his high-school career. Outside of school, he spends his fall playing football. Carson’s hard work and dedication to the team has led him to the one goal many athletes shoot for: becoming a captain.

Alongside three others—Maguire Mahacek, Jonah Spates, and Mason Wiltz—Carson leads the football team through their season. Despite the delay in starting the season due to health restrictions, the football team is ready to jump in.

“We have shown a lot of team chemistry,” Carson said, “and we are excited to play this Friday.”

However, the recent complications with the stadium caused a disruption in multiple fall sports.

Phase one of the stadium renovations occurred last spring, in which the concessions stand and ticket booth received major updates. Phase two, renovating the bleachers, was not supposed to take place until later this school year; however, when Governor Whitmer called off fall sports, it seemed like the perfect time to initiate phase two.

Phase two’s plans were put into place and had reached a point where it was too late to turn back, so when football was back on for the fall, complications quickly arose.

“As of [Monday], our home bleachers are now a skeleton,” Athletic Director Clark Udell said. “The only seating we have in the stadium right now is the visitors’ bleachers.”

With the crowds brought in by the football team, a small set of bleachers would not be enough. However, with the new two-spectator limit, seating should not be a huge dilemma, but there were still other issues.

When all of these obstacles are put together, it makes it nearly impossible for the football team to play any home games this season. These challenges took a toll on some of the players.

“Not being able to play senior night at the home stadium is definitely the toughest part,” Carson said.

All of the big football games this year can no longer take place at the home stadium: tailgate, homecoming, senior night. However, Udell was able to work with other schools and find a solution for the games that were supposed to take place at home.

“For all of our football games, we had to find another venue to play the games we are hosting,” Udell said. “We are using Forest Hills Eastern for two Varsity games and one JV game, and we are using Northview for the other remaining home games.”

Though the adaptation is not ideal, it allows the team to continue playing this year.

However, the current renovations on the stadium have caused issues for other sports as well. Soccer, for example, has had to make some major changes to their season.

The seating did not cause as much of a problem for soccer as it would have for football because, as the visitors’ side of the field is not a part of the renovations, seating is still available there. Though the bleachers are not as spacious as the home stands, the two-spectator limit gives each person that attends the game enough room to stay socially-distanced.

Even though the timing of the games is the most current adjustment, some players have found playing their games is slightly less enjoyable than keeping their usual time.

“It’s a bummer because I think playing under the lights is part of what makes high school soccer fun,” Junior Ben Taylor said. “It almost feels like EEE again because we have to do the same type of stuff, like getting everything in before dusk.”

The time change created a temporary solution for lighting on the field, but the loss of electricity affected the scoreboard as well.

“For soccer, we are able to use a small, portable scoreboard,” Udell said. “We are able to play some of those soccer games at home but [that is not the case] for football. We need the full scoreboard [for football] because of the way the sport is officiated and the [way the] official time is kept.”

Despite the issues caused by the stadium renovations, however, many players still hold onto hope this season.

“The season was supposed to go great,” Ben said. “We have a ton of talent and are very technically skilled but it’s not coming together quite yet, but I know we can turn it around and go after that conference tournament champion and make a good run for states.”

That hope held by Ben seems to be a trend in many students, including Carson.

“I am just glad that we get to play for the remainder of the season,” Carson said.