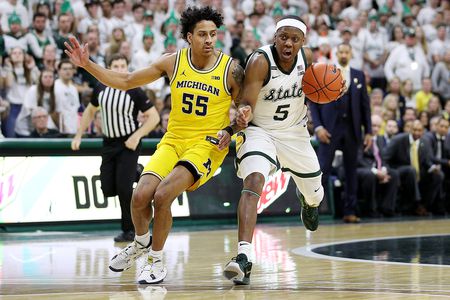 After countless uncertainty, the NCAA has announced that college basketball will return on November 25th. This significant news serves as a reminder that one of the greatest in-state rivalries in college basketball will add another chapter to its story. Over the past decade, Michigan State and Michigan have established a prominent rivalry in basketball that appears to have an extremely promising future. As the season draws closer, previews of the matchup become more distinct as both teams prepare to take on the other.

In recent years, Michigan’s basketball program has reshaped itself. When former player Juwan Howard took over the head coaching position in 2019, the narrative of the team has shifted from being experienced-based to being more reliant on youth and potential. Howard has done a truly impressive job of recruiting the nation’s top talent and bringing them to Ann Arbor. However, this leaves quite a few question marks for Howard and his young squad.

Michigan’s roster for the 2020-2021 season has shaped up well in recent months. They landed three 4-star recruits: guards Zeb Jackson and Terrance Williams, along with Hunter Dickinson, a dominant presence in the middle standing at 7 feet 2 inches. With other notable offseason transfers such as Mike Smith from Columbia and Chaundee Brown from Wake Forest, Michigan has set themselves up for much-needed production from first-year players. Even though the program lost graduated seniors Zavier Simpson and Jon Teske, the Wolverines have a sufficient amount of returning talent with the likes of seniors Isaiah Livers, Eli Brooks, and junior Brandon Johns, as well as returning sophomore star Franz Wagner. While the Michigan Wolverines have an incredible amount talent for the upcoming season, it will become incumbent upon the team to compete in the Big Ten along with a number of other fantastic contenders.

Heading into his 25th year as a head coach, Tom Izzo of Michigan State and his team have a lot to prove this year. While Izzo did a fabulous job of recruiting over the summer, his focus must turn to the upcoming season in order to remain a top team in the Big Ten. In an attempt to return to its ninth Final Four, the Michigan State basketball team prepares for this season with a roster full of experienced players, unlike its rival across the state.

After losing Cassius Winston and Xavier Tillman to the NBA, MSU must learn how to succeed without its two best players from a year ago. With only two incoming freshmen, Michigan State certainly does not have a shortage of returning players. The team heading into the season is quite well-rounded, with perimeter shooters such as Foster Loyer, Gabe Brown, Rocket Watts, and AJ Hoggard along with physical, interior threats such as Aaron Henry, Joey Hauser, Mady Sissoko, and Malik Hall. The combination of these two skillsets gives Michigan State a surplus of depth at any position on the court. With the mixture of an experienced roster and a hall-of-fame coaching staff, Michigan State Basketball is primed for a successful season.

There is no doubt that Michigan and Michigan State own the tools to have realistic championship aspirations. However, the matchup between the teams will have a tremendous impact on the season as both programs fight to stay at the top of the conference. After splitting the series a year ago, the stakes are high for both organizations. The heavyweight battle between Michigan and Michigan State is becoming one of the premier rivalries in sports history, and neither team will look to stand down when they faceoff.