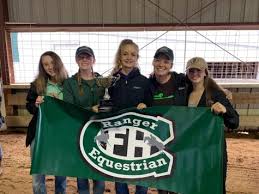 Ever since the Forest Hills Central equestrian team commenced its 2020 season on August 29th, the prospect of competing among premier equestrian teams at regionals has never left the girls’ brain. Their veteran mentor, coach Berendsbode, detailed their chances of impaling the FHC flag into the ground of regionals as “very good.”

On Saturday the 19th, the team’s roster of senior Alaina Briggs, junior Claire Richardson, sophomore Abby Satterthwaite, sophomore Masyn Cole, and freshman Meghan Bonney compiled a total of 81 points en route to a second place finish behind Gull Lake at the Barry County Fairgrounds. The Ranger rough riders were shepherded by Claire, who amassed the most total points in all classes for her team.

“Claire led us in points with an exceptional performance for her second meet with her horse,” Berendsbode said. Along with Claire, other riders such as Alaina, Masyn, and Abby had quality outings as well.

As the sole freshman on the team, Meghan has surprisingly not attached herself to the shy stereotype that normally is engulfed in many freshman. In fact, Meghan’s inability to be satisfied has led her down a path of variety.

“Meghan has been pushing herself to compete in more and more classes throughout the season,” Berendsbode said. “Our team is lucky enough to have a younger point of view to help us compete.”

The Rangers have seized an opportunity to qualify for the Regional equestrian tournament; however, their regional aspirations can only be cemented in stone if they can find a way to defend their number two overall position from the vehement stallions of Maple Valley in the last district meet of the season.

Coach Berendsbode conveyed that, “next week will solidify our classes for Regionals and illustrate who our most powerful riders are for states.” With that said, coach Berendsbode and her team are in for an exceptional ride to the finish.