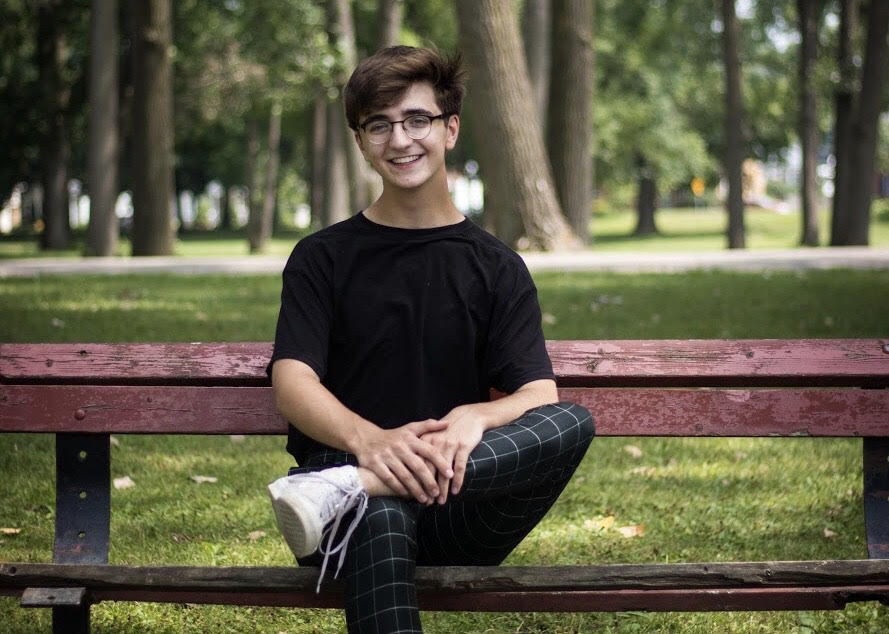 1. How did you get into improv? Why did you decide to try out?

“Originally, I didn’t have the confidence to try out for the improv team even though a lot of my friends encouraged me to. I’m a pretty nervous fella, so the idea of being really vulnerable on stage and having to act on my feet really intimidated me. But, a little birdy told me she wanted me on the team, and I couldn’t say no. So, even though I missed try-outs, I was allowed to join the team as a late recruit, and the rest is history.”

2. What is your favorite improv game? Give us an example.

“Improv itself is my favorite improv game, but if I had to choose one game, I would say four square. In four square, there are four people on stage standing in a square shape–two in front, two in back–and each pair gets a suggestion from the audience and have to build a scene off of that. In total, there are four scenes happening, and it’s both chaotic and delightful. I’ll forever love four square because on one fateful day, I was in a scene where the suggestion was… how do I phrase this in a school-appropriate way? I was once in a scene where the suggestion was ‘exotic dancer,’ so I unleashed my inner diva whose name is Shuga Rose. She’s been around the block a few times, but if there’s one thing she knows how to do, it’s to entertain. In short, one time I took my sweatshirt off and danced as seductively as a white teenage boy could because, hey, that’s improv, baby.”

“Let me set the scene for you. It’s a hot summer’s day, and about 7/11 of the team have sought refuge from the sun under the cavernous Cascade Park Gazebo. Grace Hudkins and I are called up to play a game of Forward-Reverse and as suggestions are being shouted out right, left, and sideways, Grace and I hear the perfect string of words, and the scene begins. I immediately assume the position of the shingle witch and start robbing the shingles off of Grace’s character’s roof. As the scene escalates, a battle emerges, and we are locked in socially-distanced combat as I prance around the ‘stage’ as witchily as I could while simultaneously provided some sick action music because no battle scene is complete without a full orchestra. That scene is without a doubt my favorite improv joke I’ve ever made, and it holds the record for the longest-standing improv joke, and we even put the shingle witch on our shirt!”

4. What US landmark speaks to your soul?

“I would say that one really, really old tortoise I saw at the zoo one time. I don’t really know what the rules of being a monument are, but that tortoise definitely was old and definitely didn’t move a lot. That’s a landmark if I’ve ever seen one. I hope he’s okay. Tortoise, if you’re reading this, stay strong. Sorry for calling you old.”

“As a member of the True Blue Crew myself, this question is really triggering for me. However, I would sell my soul for the Devil’s Food Cake concrete mixer. I’m not even kidding. It’s a flavor of the day that only comes around once a month, I think, and I cried the one time I missed it.”

“That’s a toughie. They all have their pros and cons, but I’m gonna have to go with the bathroom by the music hall. The real ones know why.”

7. Give us your best car salesman pitch for Improv.

“You want laughs? We got laughs. You want fun? We got fun. You want to forget about all the bad things in your life for the length of one improv performance? We got that–but also go seek professional help. Come to the Improv Show at the Ada Park Amphitheater on Saturday, September 26 and have a bucket of fun (bucket not included). You won’t regret it. Also, cars! I’m a car salesman!”