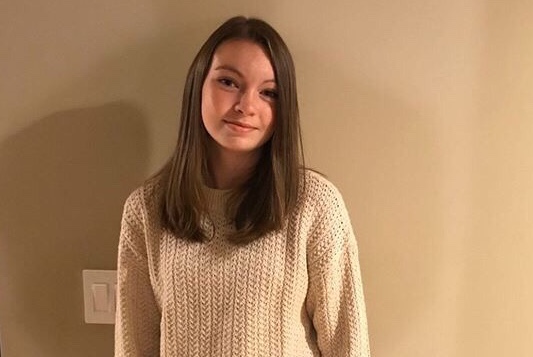 Stepping into an ice rink has been normal for freshman Mia Bateson since she was three years old. Gliding around on the frozen ground, jumping high into the air, and landing on a skinny blade has always been just a regular Tuesday.

Camel spins, sit spins, and axel double toe-loop jumps, Mia’s personal favorite, were some of the moves on the agenda for these icy practices.

All of these practices and intricate jumps led to competitions, and during the nine years figure skating was in Mia’s life, those competitions were always her favorite.

“Competitions are my favorite part,” Mia said, “because I get to cheer on my friends, travel, and they are why I put so much time into practicing. I get to show off the work I put in.”

Even when she lost, she always found a way to get back on her feet and keep breaking down the ice.

“I would say that I’m always able to bounce back after stuff,” Mia said, “like when I did figure skating, I would just lose so much, but I kept doing it because I liked it.”

At some point, however, the figure skating spark inside of her started to dwindle to a faint memory.

“It wasn’t interesting anymore,” Mia said. “I feel like I had just been doing it for so long; I needed something new.”

Despite the fact that Mia stopped figure skating when she was twelve, she has still kept the attitude of strength and perseverance, both of which she acquired from figure skating, and she has continued to be active.

Instead of spinning and jumping compromising the judges’ scores, Mia looked towards a path that was only solely judged by speed. Switching to running, she started racing through trees and following her mom’s footsteps through running cross country.

She started running because it was a new experience, and the fact that all of her friends were runners, too, pushed her to try it. In the end, she stuck with it not only for her friends but also for the joy it brought her and the goals she made for herself.

Unfortunately, this year will not be the year she hoped it would be.

In her first meet, Mia broke her foot. Her right hip was hurting her, and she believes she broke it trying to overcompensate for that.

Despite this devastating blow, she still makes her way to the meets.

“I like [going to races],” Mia said. “I think it makes me feel like I’m still part of the team, even if my leg is broken.”

Keeping up on the meets allows her to cheer her friends on and be a member of the team, but having a broken foot does not allow for much running along with them.

“I’ll feel really good [after I heal] because I can finally get back to [running],” Mia said. “I really wanted to be on varsity as a freshman, and that didn’t happen.”

Thankfully, her family and friends are helping Mia’s fight through the disappointment and pain from the break; they will inspire her to persevere until she is better, ready to run once more.

“[My family] really wanted to see me run this year,” Mia said, “especially [as my first year] in high school, so I do want to bounce back for them.”

But healing and pushing herself to run isn’t just for her family, she is excited to run again for herself. And just as she did after losing competitions when she was a figure skater, Mia will be able to bounce back from her injury, one that has put this sport into perspective for her.

“I think [my injury will make me stronger],” Mia said. “I think it’s refreshing mentally because I get to take a break and focus on healing, and then I’ll come back and be more grateful that I get to run.”