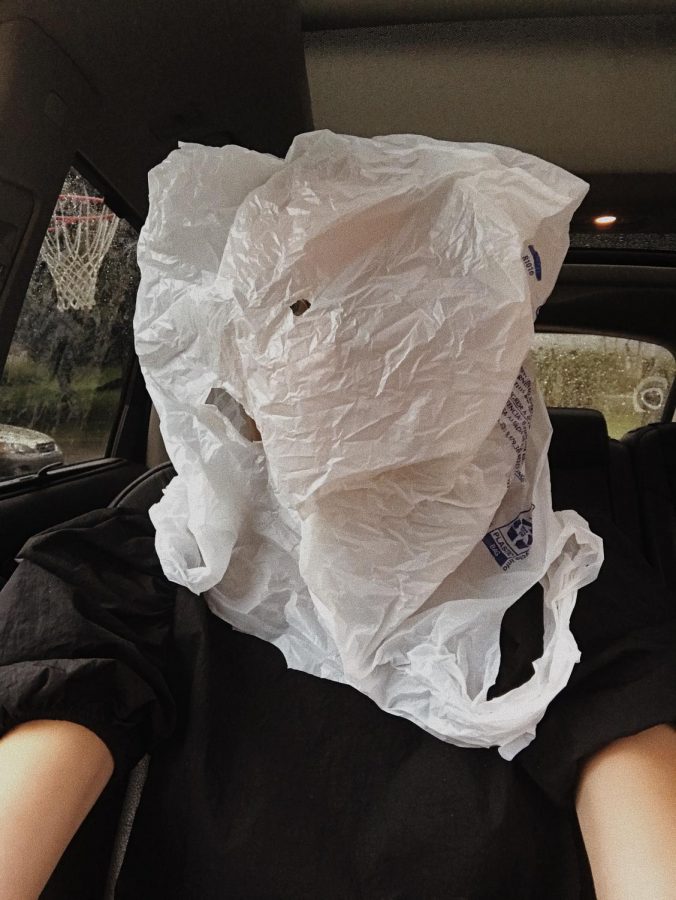 A picture I took in another instance where I had to protect my hair with a plastic bag. For someone who cares so much about her hair, maybe she shouldn't cut or color it whenever she gets sad.

Drenched in melancholy, I stepped out of my car after the day of a too-itchy sweater, an empty card in an unaddressed envelope, and a plastic bag as a makeshift umbrella, and I just let the rain-soaked grass stick to my shoes as I walked through my yard to the front door of my house.

Despite my 396 Hz “Let Go of Fear & Guilt” and “Dissolve Negativity” frequencies I had queued for bed the night before, nothing was really dissolved when I woke up the next morning. I willingly dressed myself in a sweater I told myself not to wear anymore because it’s so itchy it hurts, which was my first sign of self-sabotage, but I also put in the time of lightly styling my bangs even though the universe decided to douse me not only in melancholy but rain.

I was running late for school, as always—I hate being late yet somehow never find myself anywhere on time—and barely had time to locate my lost keys, let alone look for an umbrella. I didn’t want the work I put into styling the bangs I impulsively cut for the third time to go to waste, so I quickly grabbed an oddly large dog waste bag and put it over my head as I ran out the door.

When I got to school, plastic bag thrown in the backseat and bangs still intact, I inspected my subpar parking job and decided that, maybe, I could turn the day around. Despite the sweater that I regretted putting on the second that horrible material reached my skin, and despite the torrential rain that the universe so kindly gifted me, I decided—as I literally ran away from my inability to park in a space that isn’t a pull-through—that running from my problems was not going to solve them.

And I decided that rain isn’t a good enough reason to hate the day because rain did not do anything to deserve that negative connotation. And, after all, I had attempted to dissolve any negativity a mere twelve hours before this school day with my healing frequencies.

As someone who is not entirely sure if they are glass-half-full or glass-half-empty person, I really, really, really tried to look at the rainwater filling my cup as a good thing—as half full.

But one failed math quiz, two itchy arms, three trips to the bathroom, and four wheels taking up more than one parking space later, it was really hard to envision that half-full cup—I could only imagine knocking that stupid glass over just to show the universe that none of my negativity, or fears, or guilt, or anxiety had been dissolved. In fact, they had only been heightened.

By the end of the day, all I wanted to do was scream, change my stupid sweater, and tell someone—anyone—that my day simply sucked. In that order.

Before I got into my car for the last time that day, before I made the five-minute drive back to my house that I could stretch to fifteen if I took the sometimes-needed long way, I was very randomly given a blank card with the instructions to “write to somebody I love.”

This simple act did not reverse my bad day, but it was enough to give me the strength to not scream the entire five minutes back to my house.

Drenched in melancholy, I stepped out of my car after the day of a too-itchy sweater, an empty card in an unaddressed envelope, and a plastic bag as a makeshift umbrella—just letting the rain-soaked grass stick to my shoes as I walked through my yard to the front door of my house.

It seemed fitting to end the day with soaked shoes. And it was even more fitting that I forgot to take that empty card inside with me.

I still haven’t written the letter, and I haven’t even gone back to the car to get it quite yet.

That night, blanketed in the wake of rain that doesn’t cleanse—the smell of guilt—I imagined my half-full cup spilling onto my letter full of everything I’ve ever wanted to say but haven’t, addressed to one person, and one person only.

But my cup isn’t full enough to drench the words completely, and I’m not ready for any of them to be seen. It’s too raw, too unedited. I’m too soaked, too submerged—too sad to fully express my sadness.

Because, no matter how hard I try, no matter how many different ways I attempt to turn a day around—a day like the one I just wanted to tell someone, anyone about—every night is the same: drowning in the after-thoughts of rain. A day can be the worst day ever or the best day ever, but the night—that is what hurts. It’s guilt, it’s nostalgia, it’s hatred, it’s sadness, but most of all, it is melancholy in it’s purest form.

I want to write, I do, but I think the universe was actually on my side this time. She knows better than I do when the “right time” is, and it’s not the time to write that letter. So whether I “forgot” that blank card in the car, or it was purposeful neglect, it’s still sitting in the passenger seat, waiting for the right time.

Waiting for a day that doesn’t start with rain and end with guilt.