The first 2020 presidential debate was an embarrassment to the nation 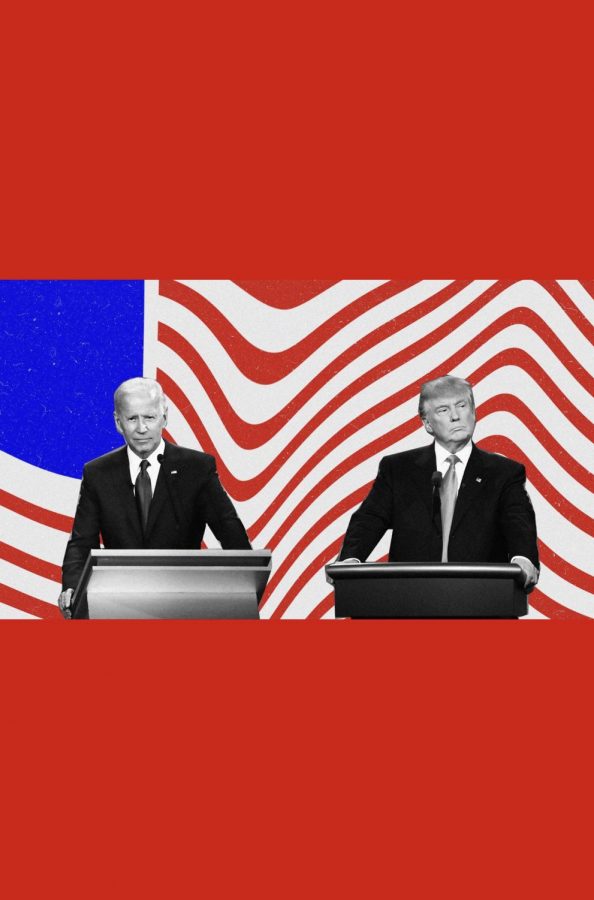 “Will you shut up, man,” Democratic nominee Joe Biden said during the first 2020 presidential debate.

This simple statement encompasses what a portion of the nation is feeling in recovery from the utter foolishness of Tuesday night’s debate.

Doing a complete disservice to democracy, President Donald Trump and Biden clashed early from the start. There were five topics “covered,” fifteen minutes for each, a portion of open discussion, and no shaking of hands at the dawn of this disaster.

As for the moderator, Chris Wallace of Fox News, let’s just say that there were three grown men yelling at each other for an hour and a half of Americans’ time. Nonetheless, it would be a difficult task to moderate a debate between two people who turn cold and uncompassionate to each other in the face of a nation experiencing one crisis after another.

Kicking off the evening was Trump’s discussion of his new appointment to the Supreme Court, to replace the late Ruth Bader Ginsburg, Amy Coney Barret. He talked highly of Barret for the segment, referring to her as being “highly respected by all.” Still, Trump dodged accusations claiming that this act was an injustice to the American people, and also dodged any policy talk whatsoever.

Moving to Biden’s two minute—yet sorely interrupted—rebuttal, he went straight into questioning the legitimacy of this appointment. Later, Biden even pivoted towards the camera: addressing the nation and urging them to “express their view” this November. He closed out his time by respecting Barret as a well-rounded woman.

As they moved into the open discussion about this topic, Trump jumped in right off-the-bat with an onslaught of attacks on the Democratic Party. Wallace, only marginally successful, tried to reel him in and shift the focus back to the discussion of Barret. However, for the most part, both Biden and Wallace’s attempts to talk policy were to no avail as Trump danced around difficult questions by changing the focus in an abrasive nature.

Unlike Trump, when Biden got the chance to talk he attempted to talk policy. In spite of this, his policy talk was redundant and lacked that extra something to make his points stick. In fact, it was clear throughout the entire debate that Biden only looked marginally better because Trump was doing so terribly. It can be seen, once again, that Biden’s strategy for the evening was to be empathetic and personal with the American people as he turned once again to address the nation individually.

Wasting no time, Biden jumped headfirst into discourse about statistics and Trump’s plan (or lack thereof). Adding to this, he sprinkled remembrances of Trump’s unthoughtful comments about the pandemic to further ensue his strategy of presenting himself as the sympathetic leader.

When it came to be Trump’s turn, he moved to avoid responsibility for any of the claims Biden had made earlier. Instead, he chose to be rather defensive in last-ditch attempts to validate himself—even comparing himself to Biden saying, “he never could have done the job.”

As gears shifted into open discussion, both Trump and Biden put one another under heightened scrutiny. Starting off, Biden began speaking, once again, about some of Trump’s inappropriate comments towards the COVID-19 crisis. He attacked Trump about there being no national mask mandate, and, further, stating that he was “irresponsible [in his handling] of masks and social distancing.”

With Trump’s reply came one of the lowest points of the debate: a ruthless, unrelenting attack on Biden. To begin, Trump claimed he was the reason that Coronavirus is such a political topic. Furthermore, he bashed Biden for his small rallies, saying that “nobody wanted to come,” rather than acknowledging the questions he was asked in the first place.

Still, Biden came back by turning Trump’s accusations right back around on him. He referred to Trump as someone who “only cared about himself and not [the] Americans who attended his rallies.”

Trump commenced this section—which consisted of some of the most un-presidential babble ever spoken—by completely disregarding the set topic. Instead, Trump decided to continue the earlier discussion of, in his own words, “the China plague.” However, it was interesting to see him interrupt his cycle of ignoring questions and bashing Biden to mention mental health.

At Trump’s expense, Biden’s counter arguments were surprisingly well-articulated and organized. He continued with his strategy of empathy towards the American people, once again addressing the nation and, especially, lower-income families.

As the debate moved forwards into the open discussion about this topic, Wallace threw more fuel into the fire by bringing up Trump’s income taxes. In even further harm, Biden took advantage of this opportunity to play the offensive against Trump.

Yet, it was hard for Americans to understand much as the bickering between the candidates turned into a slurred mush of insults that overtook civil conversation—even getting to a point where Wallace had to, in a poor attempt, slap Trump on the wrist for continuing to interrupt the discussion. As was the theme of the night, Biden swooped in with unprofessional comments, even referring to Trump as “this clown.”

Race and violence in cities:

Opening this sensitive section of the debate was Biden plunging deep into the faults of Trump’s reaction to peaceful protesters. He even went so far to claim that Trump “wants to create racial tension and to divide the country.”

Trump’s rebuttal was nothing short of Biden’s earlier on in the evening. In fact, he too brought up Biden’s splotchy past of less-than-ideal statements about the African-American community. He stated that the nation’s law enforcement supports him, even going so far as to attack Biden about his shaky relationship with his own party.

Kicking off this controversial open discussion was Biden with talk about systemic racism. He, with no hesitation, criticized Trump for ending racial sensitivity training. Later on, he went into talking about his early life and his experience growing up in the suburbs—all of this in alignment with his recurring strategy of sensitivity towards the American people.

Although this entire debate was a debacle, Trump’s addressing of racial injustice was nothing short of an injustice within itself. Rather than focusing on specific issues, he chose to make broad statements that addressed the democratic party and instead disregarded racial injustice.

Both candidates trailed off during this discussion as if to further disappoint the nation which, if each other allowing, could have been the pinnacle of the night.

Biden initiated his two minutes with no feasible points whatsoever—they could not have strayed any further from the topic. Biden’s broad statements, and obvious little preparedness for this portion, laid an opportunity right at Trump’s feet for a personal attack on his fellow candidate. At his own fault, however, Biden foolishly played right into the hands of his opponent and both candidates avoided talking policy whatsoever.

Trump left no stone unturned when discussing Biden’s personal life during this debate, and furthered his agenda by bringing up his son. This adds to the obviousness of Trump’s lack of strategy besides focusing on unrelated topics.

Once again shifting to open discussion, the candidates were asked to focus on the climate crisis. As Trump began, he spoke with vague mentions of statistics and opinions of “professionals” who, apparently, didn’t have names. Honestly, this topic furthered the ridiculousness of his broad claims in general, and, more specifically, his childish demeanor towards other countries.

Biden took advantage of this and went on to make claims about Trump and his relationship with foreign policy. As if to only further dissatisfy the nation, and to fall in line with the theme of this debate, Biden spent most of the time he had attacking Trump instead of actually speaking on anything of substance.

To close out this sorry excuse for a presidential debate, Biden turned once again in a last-ditch effort to address the American people. He encouraged the nation to go out and vote, whether that be by mail or in person through social distancing and mask measures. Nonetheless, he fell right back into the pattern of the evening and shifted his focus back towards Trump in the one section of the debate where it was most inappropriate.

To make matters worse, Trump chose to respond to Biden’s accusations and spend little time on the issue at hand. And what little time he took to discuss the topic was a waterfall of nasty comments about the nature of this election. In harm to himself, he almost seemed to discourage the American people from casting a vote from his own beliefs of the legitimacy of the election.

Down to the final minutes of the evening, the last open discussion ensued another assault on the Democratic Party by Trump. In a strange turn of events, however, he ended on a note of agreement between the two candidates. Referring to election fraud, Trump claimed, “I want an honest ballot count, and I think he does too.”

In unparalleled agreement, Biden went on to reiterate Trump’s final point. He turned to encourage his supporters to remain calm in the face of this election controversy. And, in closing out the evening and remaining in alignment with the nonsensicality of the evening, Biden made one final unrelated statement saying, “I will be a president for both Democrats and Republicans.”

The first 2020 presidential debate was a slap-in-the-face to the nation. This unruly display of impropriety leaves many Americans with more questions than answers from before they tuned in to witness this disaster of a debate unfold. Both Biden and Trump, and Wallace to go even further, were handed an opportunity to connect with a nation in upheaval from months of unknowns, and instead chose to waste it with foolish bickering.

Although no candidate won this debate, America is somehow still the one that lost.