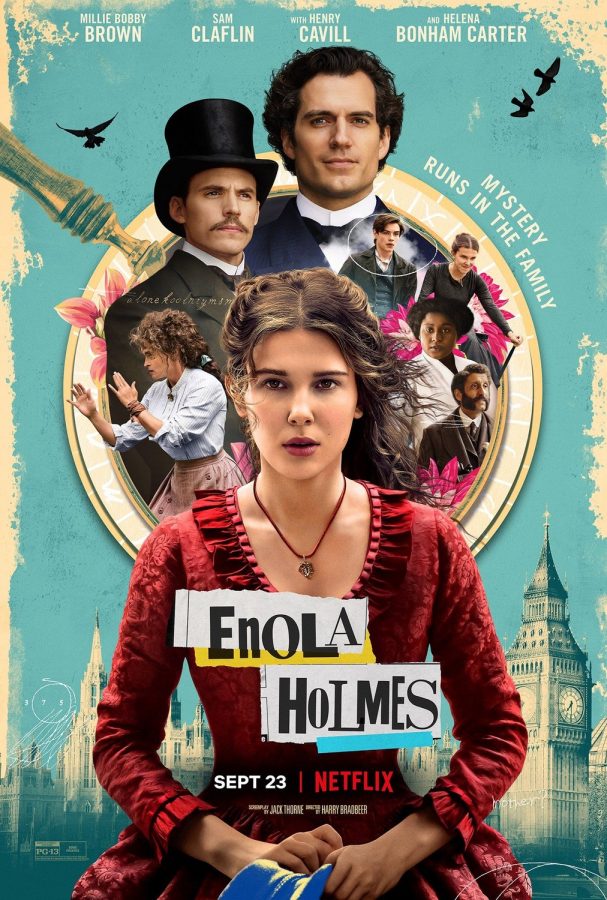 This is a movie poster of the show Enola Holmes.

For over a century, Sherlock Holmes has been known as one of the greatest detectives to exist. Even to those that do not know of his adventures, the name itself holds so much power in the investigative world.

However, Sherlock Holmes is yet another example of the masculinity held by copious protagonists in the world of fiction. It is understandable considering the fact that it dates back to over a hundred years ago, but growing up with those standards made it difficult to gain confidence as a young girl.

Though one movie cannot compare to the sixty stories of Sherlock Holmes, the new-fashioned movie Enola Holmes provides young girls with a dynamic role model.

Enola Holmes follows Sherlock Holmes’ (Henry Cavill) younger sister, Enola (Millie Bobby Brown). When her mother goes missing, Enola believes she is the only one that can find her. Her brother, Sherlock, is of course working on the case, but Enola knows he’s missing some facts and sneaks away to solve the mystery on her own.

When Enola leaves to find her mother, she quickly finds herself facing obstacles she is not prepared for. While she is riding the train to London, she meets Viscount Tewkesbury, Marquess of Basilwether (Louis Partridge). Tewkesbury, like Enola, is on his journey to get as far away from home as he can. Enola finds herself pausing her task of finding her mother to help Tewkesbury and the two of them form a distinctive bond.

Tewkesbury quickly becomes the new Watson to a Holmes’ family member. The dynamic duo provides an interesting plot due to the contrast of their personalities.

Enola has spent her entire life hiding away with her mother while her brothers, Sherlock and Mycroft (Sam Claflin), were out making a name for themselves. Both of her brothers created a name that is difficult to outlive, yet, at the mere age of fourteen, Enola finds herself doing exactly that.

Enola Holmes takes place in the nineteenth century. The timing of the story was difficult to adjust to and, to those without knowledge of that time period, making it difficult to comprehend Enola’s background.

There are copious times in the film where Enola pays someone five pounds to switch clothes with her. At first, I didn’t think anything of it; five pounds is not very much in today’s world. However, after some extensive research, I found out five pounds is equal to approximately six-hundred fifty pounds today. I found this very intriguing considering Enola was in the middle of London, surrounded by shops.

The idea of secrecy makes it somewhat understandable, but it still seems odd.

Millie Bobby Brown is becoming a major influence in the world of entertainment, so it was strange to see her in a role so different from her role in Stranger Things. However, the contrast assisted her acting in a way that made her appear more immature.

Enola Holmes gave the world a new perspective in a world full of male detectives and shows young girls the importance of persistence.