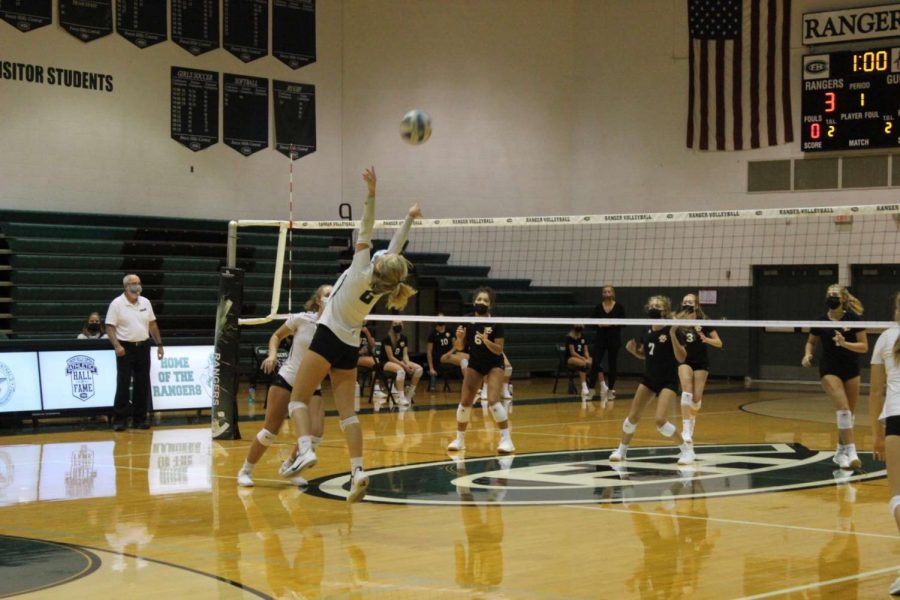 After starting the season 3-0, JV girls volleyball was faced with a tough road task against conference rival Grand Rapids Christian. The girls lost a heartbreaker in two close sets against their in-conference foe. On the bright side, the Rangers bounced back last night with a big win over Byron Center in a two-set sweep over the Bulldogs.

The Rangers came out strong but the Eagles were not going to give up without a fight. No matter how hard the girls fought, Christian was one step ahead. The Rangers lost the opening set 25-22 with great plays from libero sophomore Kate Hotaling and a fierce frontcourt of freshman Mila Kavara, sophomore Ally Werekama, and sophomore Averie Zaschak. In the second set, the Eagles took an early lead but the Rangers would not shy away from their opposition. Big plays from the frontcourt and the backcourt tandem of Kate and sophomore Emma Costello kept the girls in it. Unfortunately for the Rangers, the girls fell in another close set by a score of 25-23, which would give them their first loss of the season, bringing them to 3-1

After a hard loss a week prior, the girls came out with more energy then they have all season. The girls knew that a loss against Byron Center would take them out of consideration of winning an OK White Championship. To begin with, the first set started with a huge spike by Ally set up by Kate and Averie. The defense was making great plays with many diving saves, which kept FHC in fighting position. The Rangers ended up winning the first set 25-16. The second set started sloppy with Byron Center taking an early 4-1 lead. All of a sudden Emma Costello took over. She was on a hot streak with a great serve streak to give the Rangers a big lead. Kate put the danger in the heart of the Bulldogs, which led to a match point with the girls winning 25-18.

The Rangers are now 4-1 on the season and still remain on the top of the O.K White division. The girls’ next game is next Tuesday with an away match against cross-town rival East Grand Rapids.