JV football suffers its first loss of the year, falling to Byron Center 21-14 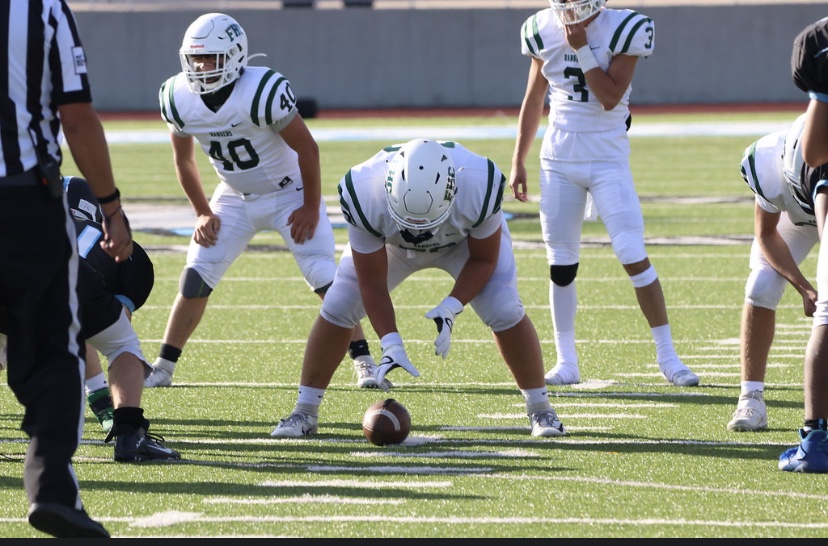 After a sizzling hot 2-0 start, the JV Football team hosted Byron Center with hopes to remain undefeated. With help from sophomore quarterback Justin Osterhouse and wide receiver Rowan Clay, the Rangers were able to stay persistent in the first half. Unfortunately, Byron Center took a late lead and closed out the game, defeating the Rangers 21-14.

“I think our focus early-on was great and I think our mood was good out of the gates,” head coach Ty Hallock said postgame. “Unfortunately, the problem tonight was that we made very dumb mistakes down the stretch. We had good intentions, but sometimes good intentions don’t suffice, particularly when we step outside of what we usually are.”

Hallock’s disappointment stems from multiple second-half turnovers that ended up being tremendously costly. A specific encroachment penalty by the Rangers in the final minute effectively sealed the game for Byron Center. Despite these expensive mistakes, FHC battled until the very end and refused to give in.

The game started off with an early touchdown by freshman JT Hartman on a 7-yard rush. With this score, the Rangers improved its combined score with opponents to 47-0 on the season. However, the defense could not hold its three-game-long shutout as Byron Center quickly responded with a touchdown of its own. The 7-6 lead for Byron Center lasted into the second quarter when the first turnover of the game occurred. A pass from Justin Osterhouse to Levi McKenzie was picked off in FHC territory and led to a quick touchdown drive, giving Byron Center a 14-6 lead.

“I honestly just missed the throw, and the defender made a nice play. I had to walk back to the sidelines and talk with the coach after that play, and I also was upset at myself,” Justin said. “After coming back to the sidelines and talking over the play, I was ready to redeem myself. Once Levi hurt his head and I came in, I just tried to erase everything that had happened from my mind and make a play.”

Justin did just that, throwing a very solid pass to Rowan Clay for a 29-yard score right before halftime. This touchdown tied the game, and the Rangers headed into the locker room with high morale.

“I thought we played a solid first half, even with some mistakes here and there. Everybody in the locker room was upbeat and positive,” sophomore lineman Owen Meyer said. “You have to give our team credit for staying in the game, especially since we hadn’t been losing in a game all season to that point. I also think that Coach Hallock was generally positive and hopeful for a strong second half.”

After not allowing a single point in its first two games, FHC stepped into the unfamiliar territory after trailing in the first half. The first half efforts from the team epitomized its will and perseverance, especially being in such an unknown position. Even though various mistakes were made, the FHC coaching staff was optimistic about their chances all the way until the final snap.

“I thought that we played decently well and relatively disciplined in the first half. We were never out of the game and had opportunities at the end. Again, it was the penalties and not executing what we were supposed to that eventually ended up costing us the game” claimed Hallock, explaining his overall feelings about the game. “We have three more games to go and they’re all decent opponents; our guys just have to bounce back. There’s no excuse for doing things outside of the realm that we are teaching.”

Seemingly unbothered by a tie game at halftime, the Rangers were attempting to take control of the second half. This was made difficult by recurring penalties and offensive miscues. In the end, the Rangers had 6 penalties for sixty yards in contrast to just 3 penalties for twenty yards for Byron Center. While both the offense and defense remained tough, the efforts were ostensibly outmatched by those of the opponent. Byron Center held FHC to zero second half points, putting themselves in a golden position to win. Such offensive struggles for FHC set the tone for a dismal scoring performance following halftime.

Byron Center broke the second-half scoring drought with a clutch touchdown with under 6 minutes remaining in the game when a receiver was found wide open in the back of the end zone. This defensive breakdown put the Rangers in a 7 point hole, trailing 21-14 with minimal time remaining. In its final drive, an FHC pass down the sidelines was picked off, severely hurting the Rangers’ chances to win. The game was not over yet; however, on its last gasp for a defensive stop, the Rangers jumped offsides on 4th and 1. This 5-yard penalty and first down sealed the win for Byron Center as they kneeled the ball down to secure the win.

“We’re going to be very honest with our players. As a program, we don’t attack players, we attack problems. A problem is anything that keeps us from playing at our highest level, and there were multiple problems out there today” Coach Hallock declared when asked about the strategy for next week’s game. “These mistakes exist to make us better, not bitter, and those players have to take the criticism that’s given to them and get better, as well as making sure we execute and take care of business as a team next week”

The loss moves the Rangers to 2-1 on the season as they prepare for yet another tough matchup next week: East Grand Rapids. FHC will travel to EGR next Thursday at 6:30 in attempts to make amends for this week’s defeat.