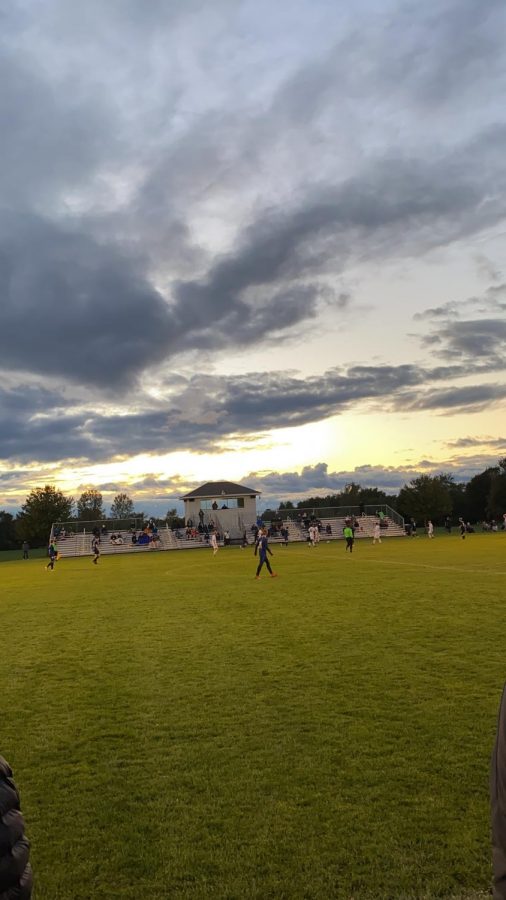 After losing in the state finals, the South Christian Sailors came back with vengeance early in the season, and have been rolling ever since. The Rangers faced them in Sailors territory on Thursday, and fell 3-0 after a very back-and-forth first half along with a close second half.

“We started out on defense facing a lot of pressure against the [South Christian] offense,” senior captain Mason Corcoran said. “We ended up creating a lot of solid chances on offense off of counter attacks, though, which gave us the momentum to continue our plan and carry out some more offensive strikes.”

The South Christian soccer pitch was beautifully trimmed with the perfect amount of slick, allowing long balls to travel extreme distances. The temperature was a crisp low fifties, creating some optimal fall soccer conditions. The boys of FHC came out ready on this fall night, as they began with a strong offensive pressure, while also creating a wall on the defensive side. The center point of the Ranger defense in the first half was none other than senior goalie Jaden Talley, who flew around the goalie box making save after save.

The Sailors had no shortage of firepower, however, as they got some solid shots off through the whole game. In the 24th minute, the opposing offense collapsed on the Ranger defense, and made a short run up field which led to a clear shot that skimmed the crossbar, giving FHC a run for their money. Also from South Christian, was a 35 yard bomb that nailed crossbar and bounced to another opposing striker, who controlled it and struck the ball to the top right side of the net. This ball was perfectly placed, but was reeled in by Jaden, keeping the score tied at zero. Eventually, however, the Rangers defense had a miscommunication that led directly to a dribble up the right side of the field, and an open goal to put the Sailors up 1-0.

In past games, the midfield for the Rangers has been struggling to maintain solid possessions, but that was not the case in this matchup. Senior Matthew Mahoney played outstanding, as he placed numerous long balls on a dime, creating shot after shot by the Central offense. This offense consists of sophomores Noah Gleason and Omar Hadzimujic, who were both in their bag, as they placed some quality shots on net that were either narrowly deflected or caught by the South Christian goalie.

“We had some very good opportunities to score against a solid defensive team, but just couldn’t capitalize on them,” Omar said. “We were getting the ball behind their back line, but just couldn’t score off the chances. Our wings and ability to play through the middle was great today as well, which is a key reason we were in the game for the majority of it.”

Most of the first half was back and forth, up until just before halftime when the Rangers had a chance at putting themselves even at 1-1. This opportunity was set up from a corner kick that was placed right into the lap of Matthew, who managed to make contact with the ball into the left side of the net. Unfortunately for the Rangers, a flying Sailor goalie came and snatched up the ball to close out the half 1-0 in their favor.

“Overall, I thought the [first half] effort was fabulous from the boys,” head coach Paul Kramer said. “I thought that we should’ve been tied by the end of the first half. We had an excellent shot with 10 seconds left, but the ball bounced and just didn’t go our way.”

With the cold weather came cramps and susceptibility to injury, which plagued the Ranger offense and defense in the second half. Jaden came down hard on his right knee early in the second half, forcing him to sit out for a couple minutes. Taking his place, was junior Ryan Fitzgerald, who filled in for about 3 minutes until Jaden was fine to come back in. Also injured for the Rangers, was sophomore Andrew Novay, who had the quick feet today and he shuffled through the opposing defense, filling his position beautifully. Andrew was stunted about halfway through the second with a calf cramp that kept coming back. Not only did these two players feel the cold, but many of the boys were visibly affected. Some played through the pain while others were hindered to a stop, and were then forced to see the sideline.

“Towards the end, we chased for the win with a limited number of men due to injury,” Kramer said. “Our intensity never went down, but our strategy altered a bit as we switched to a 4-3-3. We tried to get after it, but it just didn’t go our way.”

Through the injuries, the Rangers lost focus and allowed two easy goals from the Sailors to pin them up 3-0. Both shots were from the top of the box with a defender on the hip of the South Christian striking force. The rest of the half was surprisingly back and forth, even with the injuries and momentum in favor of the home team. Unfortunately for FHC, they couldn’t quite come back as they lost their final regular season game 3-0.

This game capped off the Rangers’ regular season for a final record of 3-7 and 1-6 in the OK White. They face EGR in their first game of the Conference Tournament on Monday, October 5 in Pioneer territory, and play a minimum of three games.

“These next few games are great prep for the boys getting ready for districts,” Kramer said. “We have overtimes, penalty kicks, and the tournament and consolation bracket feel. I absolutely love it for getting our kids ready for the postseason. We’ll get the boys geared up, and hopefully we’ll be ready by the time game time comes around.”