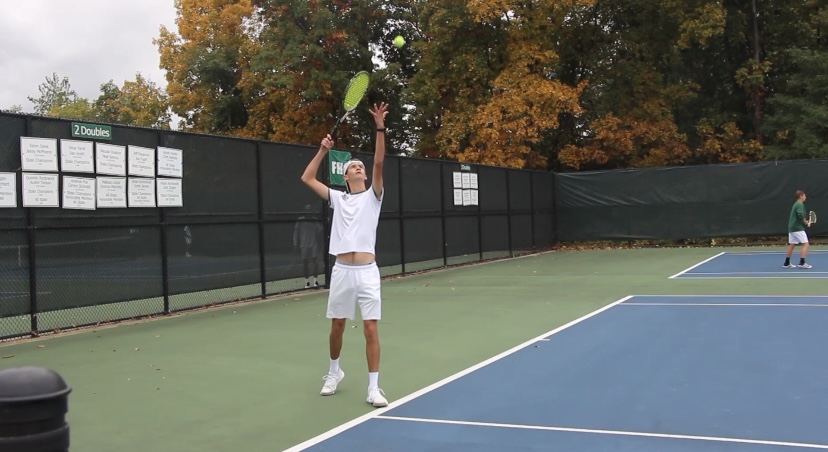 Last Friday, the boys varsity tennis team had its OK White Conference tournament at home against the Byron Center Bulldogs and the Forest Hills Northern Huskies. They took on the Bulldogs first, and then the winner of that match would go on to play the winner of the Grand Rapids Christian versus FHN match. The boys beat the Bulldogs 5-3 and then moved on to play the Huskies in the next round. They ended up falling 5-3 to the Huskies; however, they had fallen to them 6-2 the previous week.

Senior captain Jeremy James had two phenomenal performances in his singles matches, only giving up four games in total to his opponents. In his first match against Byron Center, Jeremy went 6-2 and 6-1 against his opponent. Against rival FHN, Jeremy only gave up one game to his opponent, winning 6-1 and 6-0.

“I was playing really well and was focused for both matches,” Jeremy said. “My goal was to win quickly so I could watch my teammates and give them energy while they were playing to help the team overall. We performed incredibly well overall; [we] had some clutch performances against Northern from [sophomore] Sammy Yin, [junior] Devin Holcombe, and [sophomore] Noah Kriekard.”

Devin and Noah had a long day, but it was an accomplished one to say the least. The four doubles team took on Byron Center in its first match and beat them 6-4 and 6-2.  They then went on to play the Huskies, and after losing to them the previous week, the boys were ready for another chance, eventually coming out on top in those matches too.  They won the first set with a close score of 7-5 and 6-4 in the second set, winning their match and helping the Rangers get a third point against the Huskies.

Also competing well against Northern was Sammy at one singles. The match did not start out in his favor, and his opponent took the first set with a close 7-5; however, Sammy came back with a 6-1 win for the second set. The third set came down to the very end with Sammy taking the lead, ending with a 7-5 win.

“Of course I felt amazing after beating both of the opponents, especially against FHN. It was an amazing and enjoyable experience. I also feel like a lot of hard work has been paid off and that I’m showing signs of good improvement for the future,” Sammy said. “I think that my team did great in both matches, but I think that during our match with FHN, we could have pulled off some of the close ones and won.”

“We showed improvement against FHN,” head Coach Dan Bolhouse said. “We were close, and the score could’ve been 5-3 if we were able to win a few key points. It did show everyone that we can play at a championship level, and we are excited to face them again.”

Some of the doubles teams competed in several close matches against Northern, including the two doubles team of senior Nick Stockenauer and junior Walker Sjolin. The two went into their match against Northern coming off of a 6-2 and 6-3 win against Byron Center. Their match against FHN started out strong with a 6-4 win in the first set but went down from there. They lost the second set 6-0 but came back and put up a fight in the third. Unfortunately, they lost the third set 6-4 in the end.

Another doubles team that had a close game was the one doubles team of senior Chris Battiste and junior Cully Herbert, who had an amazing match against the Huskies. The duo won the first set with a score of 6-4. They had some great serves and long rallies in which they came out on top. During their second set, both teams were battling, but Northern won 6-4. It was up to the third set to determine the winner; however, Northern took the third set with a score of 6-3.

“Chris and Cully have been playing at a high level all season,” Bolhouse said. “It’s been fun watching them grow and improve as the season has moved on. I’m expecting big things from them at Regionals and States. I’m expecting our guys to come out and play at a high level.  Due to COVID, the format is much different, but our boys will be ready to compete. We need to take care of our business and qualify for the state finals.”

“I think we’ll perform really well, we’re supposed to win our region this year with the new format, but we can’t take these next days and the tournament for granted,” Jeremy said.

Sammy agreed, noting his optimism for the future.

“I think that we will have a good regional tournament and have a really good chance of advancing to States,” Sammy said.