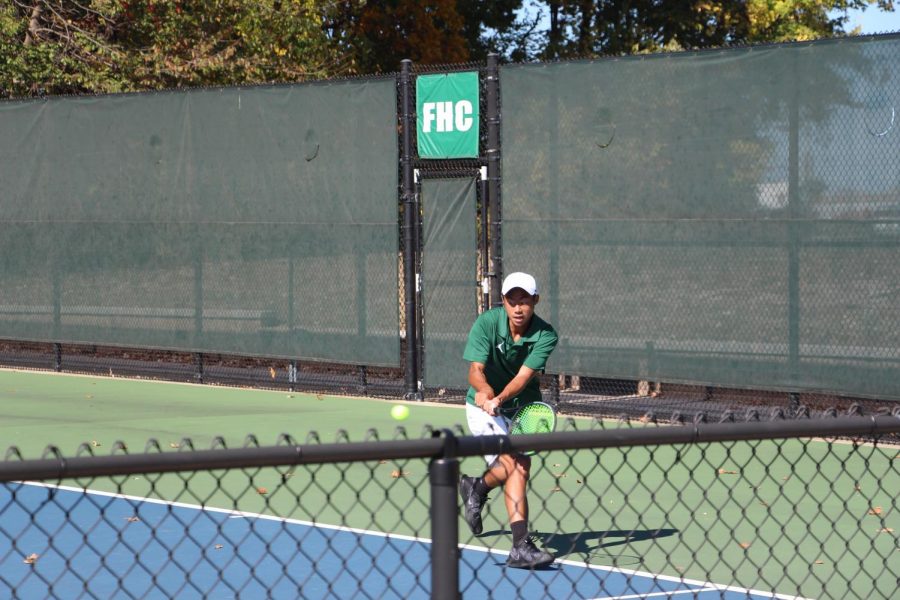 Yesterday, the boys varsity tennis team had its district tournament. The boys played at home against Lowell, then advanced to play Mona Shores in the finals. Having multiple great matches, the team went 8-0 against the Red Arrows and then swept the Sailors as well.

In their first match against Lowell, each of the boys won their match in two sets. Having a particularly good match was sophomore Chris Shang. Chris is the team’s three singles player, and he easily beat his opponent 6-0, 6-0. Four singles team of junior Devin Holcombe and sophomore Noah Kriekard also had an exceptional match against the Red Arrows, only giving up two games total; the boys won 6-1, 6-1.

After taking on Lowell, the boys moved on to play Mona Shores. The team won six of the eight matches fairly quickly and easily, but two matches were left to decide the final score. One singles player sophomore Sammy Yin and four singles player freshman Nico Notarnicola were both involved in the remaining heated matches.

Sammy started off his match with a 6-4 win but fell 6-2 in the second set. Determined to win, Sammy came back in the third set, beating his opponent 6-0. Finally, Nico showed persistence during his match. Nico fell 6-4 in the first set, but that was not going to stop him. Both opponents played well in the second set, but Nico came out on top with a score of 7-5. It came down to the third set to decide the winner. Continuing to play well, Nico won the third set 6-0, helping the Rangers take the eighth court.

The team will advance to the Division 2 state tournament. States will be held in Midland Dow next Thursday and Friday, the 15th and 16th of October.