FHC’s homecoming traditions lie in the hands of administration 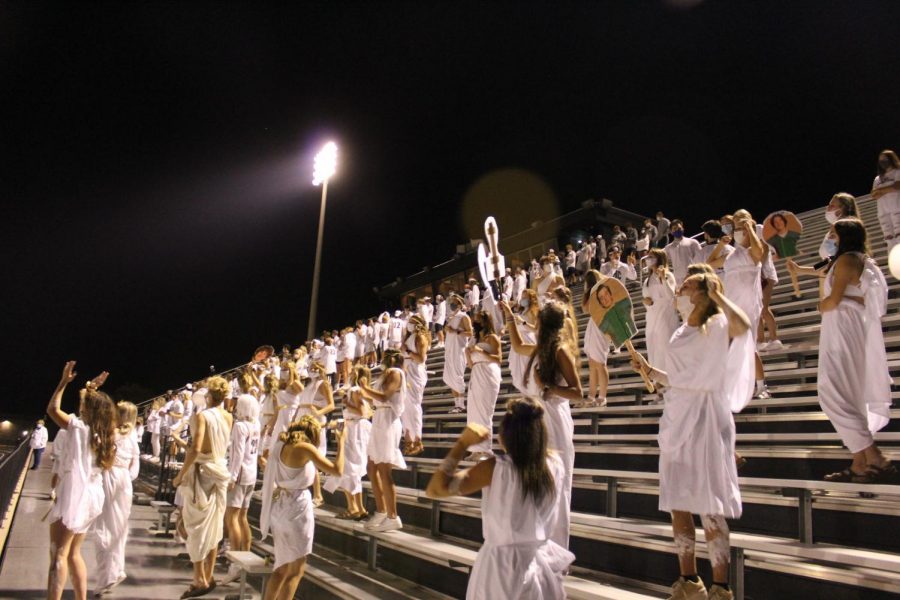 “It’s very sad [for sports] not having a typical homecoming,” Anderson said. “That’s an exciting night for the football team to be able to walk out and see 3000 people in the stands. The whole town is here; generations come out of the woodwork to watch their team play.”

The restrictions placed on current sports will limit the number of students allowed to watch the homecoming football game—a game that holds so much energy and life.

However, football is not the only sacrifice made due to COVID-19. Students this year will unfortunately not have the opportunity to experience a homecoming dance or powderpuff game.

“There will be no parade either,” Anderson said. “It will, unfortunately, be postponed until next year.”

“We are working with administration right now on a couple of fun activities,” Anderson said. “We are working on some sort of tug-of-war between the classes in a socially-distanced way.”

The tug-of-war competition, though it is still happening, will be a bit different from previous years.

There is a smaller limit on the number of students allowed to participate in the competition, and everyone involved will be required to remain on the marked spaces on the rope. Students will also be required to sanitize their hands in between each battle. In order to keep contact limited, each battle will last less than five minutes.

“Basically, this whole plan is designed for contact tracing,” history teacher Laura Stiles said. “I figured if all of this stuff is built around the current safety protocols, how could they say no?”

The current homecoming plan, though it is intended for all students, is giving seniors a chance to experience at least a little bit of normal this school year.

“Truthfully, I am kind of focusing as much as I can on the seniors,” Stiles said. “We just added, for example, senior tile painting, but we have to do that in classes as well.”

Senior tile painting will occur after school on the Tuesday of homecoming week. Seniors will be outside and have a couple of hours to paint their tiles.

The idea of keeping tile painting along with some of the other regular homecoming traditions is an exciting thought to many seniors.

“It’s disappointing that we aren’t able to hold a traditional homecoming,” senior and student council secretary Rachel Lynch said, “but it’s also nice that we still get to have a sense of normal with our homecoming. Obviously, there’s no dance, but Stiles and the student council board are working on other possibilities of normals for that week, and that’s exciting.”

“[I’m looking forward to] the spirit days,” Rachel said. “It’s always fun to dress up, support the school, and show unity even in this time of uncertainty.”

Though homecoming week is not normal this year, there is still a lot of excitement surrounding it. There has been so much thought and effort put into homecoming week, and the expectations are just as high as previous years.

“I have been working on this for a long time, and we have just been brainstorming and brainstorming,” Stiles said. “I think it’s awesome, and it’s the best we can do.

Homecoming week may be different this year, but students and teachers have not lost hope that next year will be back to normal.

“Once COVID-19 is done and we have moved on and we are able to prepare ourselves as a society,” Anderson said, “2021 will be the biggest, best, most celebratory homecoming in the Forest Hills Central history. It will be the greatest Ranger Country homecoming ever: largest parade [and] largest tailgate. We’re going back, but we are coming back bigger and better.”