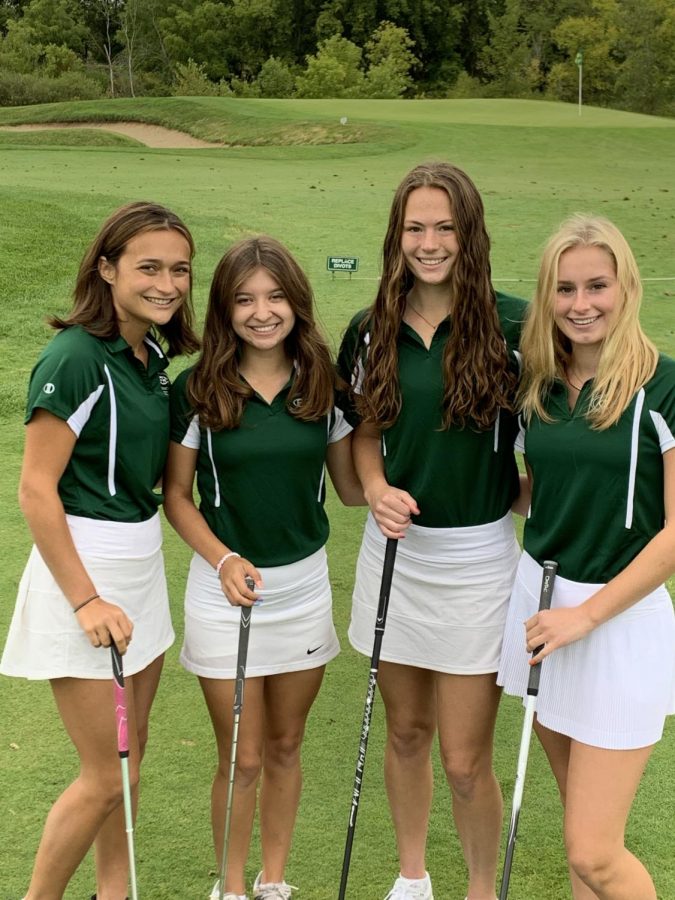 The girls varsity golf team had a very up and down season this year. The highlight of the year was winning the Russ Johnson Invitational tournament hosted at Gracewill Golf Club. The Rangers shot a combined score of 356 to finish in first place. Senior Maddie Knoor came up big for FHC in this event, tying her career best with a 83 and a solo second place finish. The Rangers also placed third in the Greenville invitational at Brookside Golf Club.

The girls struggled in a few events as well. The Lowell Jamboree at Arrowhead Golf Club was a tough showing for the Rangers. The girls shot a 195; only 23 strokes off of the first place FHN Huskies. Regionals was a long round for the girls as well. With a score of 416, the Rangers missed qualifying for states by 8 strokes. This was a brutal ending to the season for the girls because they had the ability to score well enough to advance. The seniors were crushed by this, coming to the reality that their high school golf careers were over.

“It absolutely breaks my heart knowing that’ll be the last time I ever play for FHC Golf,” senior Taylor Baumgardner said.

“This season has been surreal in so many ways,” head coach Paul TenEyck said. “But I am proud of the seniors and how they embraced the year and fought until the end.”

Golf is a team sport just as much as an individual sport. This can cause a lot of stress on the golfer. Golf can teach someone a lot about himself or herself. It is such a mental sport that during the round, one will learn how to respond to adversity or pressure.

“Golf is such a mental sport, and I can say that through these four years I’ve become a better person because of it.” Taylor said.

The girls really tried to make the most of this season with the unfortunate restrictions due to Covid-19. Teammates had to play with each other in tournaments, where in previous seasons the girls were matched up with girls from other schools. This is a tough adjustment to make when playing in tournaments. The girls are used to playing with their teammates in practices that are more relaxed, and when put into tournaments it can be hard to differentiate between tournament mode and practice mode. Also, MHSAA restricted the girls from being able to take the pins out in tournaments. The girls had to adapt to this as most golfers tend to take the pins out on the putting surface.

“The guidelines put on us this season because of Covid-19 were really difficult to get used to at first,” senior Maddie Knoor said. “I eventually became used to it, but it was still uncomfortable.”

The girls golf program will miss the four seniors immensely; however, multiple girls are ready to step up and fill the opening leadership roles. Junior Bella Wisely and freshman Skyler Tiereny are going to play a major role in the team’s success next season.

“Although I am going to miss the seniors, I am looking forward to being able to lead the team next year,” Bella said.

Freshman Skyler Tiereny played a big part for the Rangers this year and will likely be playing in the number one slot next season. Skyler placed fifth individually at the Russ Johnson Invitational with a score of 86. She birdied three out of her first six holes, which helped pull the Rangers into a first place finish. Skyler also shot 98 at the regional tournament, tying for first place on the team.

“I am very excited to see what Skyler can bring to the team in her next three seasons.” Taylor said.

This was a unique season for the girls golf team. Coach TenEyck’s goal was to develop the girls’ golf games. Short game was a major point of emphasis throughout the entire year, and will carry on to be crucial in the upcoming seasons.

“I tried to help the girls improve their games all year long,” TenEyck said. “I am extremely proud of their efforts and grateful for how much fun the team made this season.”