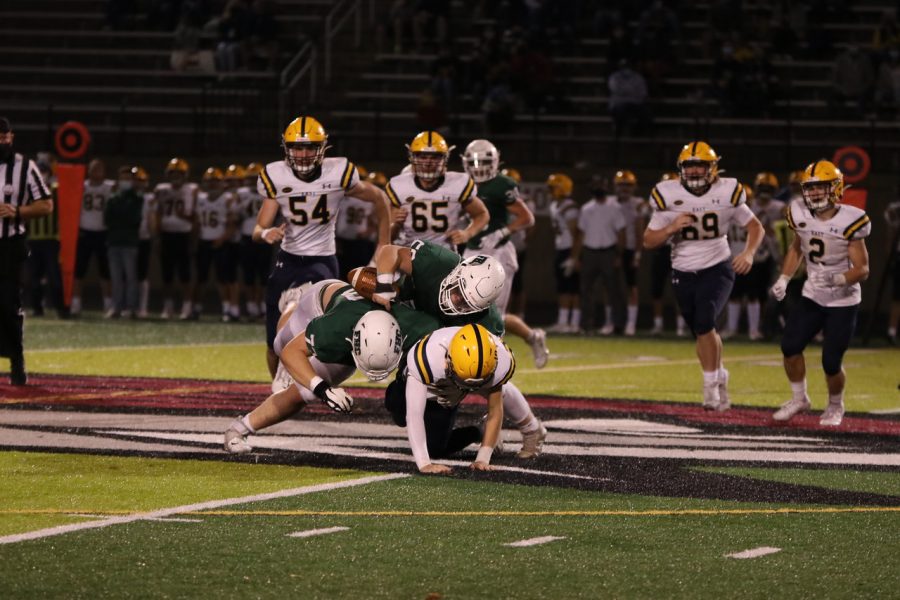 With just over a minute to go in Friday’s contest between varsity football and East Grand Rapids, the Rangers held a tight 17-9 lead; senior Mason Wiltz and junior Will Richardson wrapped up EGR quarterback Patrick Burns, and Mason ripped the football from Burns’ hands as he fell to the ground, recovering the fumble in the process and relieving the pressure on the FHC defense. 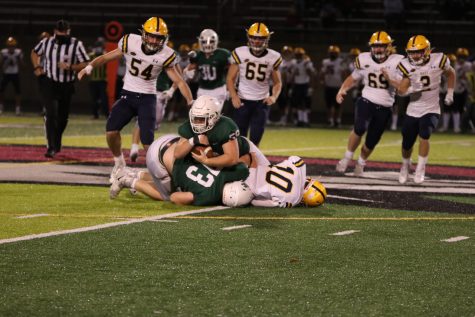 “It was a great feeling [to recover the fumble],” Mason said. “But I know I wouldn’t have been there without my teammates’ help with coverage and Will having contain.”

Right away, the Rangers showed improvement from the performance against Byron Center. After letting the Bulldogs go 2/2 on fourth down conversions the week prior, the FHC defense kicked off the game with a turnover on downs as the Pioneers tried to slam the ball down the trenches early on.

With senior quarterback Maguire Mahacek ruled out for Senior Night due to injury, junior Hunter Robinson was alone under center for the night. On one of the first offensive plays, senior Joey Wise—who has shown a lot of improvement this season—took the handoff for a 23-yard carry, putting the Rangers at the EGR 30-yard line. Just a couple of plays later, Hunter found junior Benny Scholler for the 11-yard catch, which set up for the first scoring play of the game. Hunter rolled out to the right side of the field and found the hands of senior Dallas Hopson in the endzone, who leaped over the Pioneer defensive back for the grab and his first varsity football touchdown. 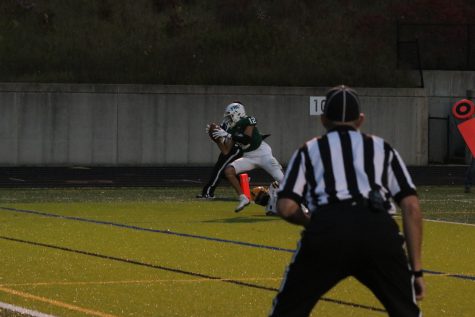 “It felt great to score my first varsity touchdown, as I have been working hard all four years for that moment,” Dallas said. “It feels great to do something good for your team.”

Starting on their own 22-yard line, the Pioneers gained ground bit by bit. The EGR running back duo of Nate Milanowski and Khristopher Williams-Young did more than hold their own in the game, leading the charge for EGR’s 267 rushing yards on the night. Nate broke through eventually for the score, breaking a few tackles and running it in from 11 yards out. However, after a failed two-point conversion, the Rangers still led 7-6 with 11:09 to play in the first half. Still, the FHC defense needed to make some adjustments if it wanted to contain the run game.

“They were a very physical team that always played downhill, which allowed them to move the line of scrimmage and create gaps for their players,” senior Carson Deines said.

While he also acknowledged East’s strengths, head coach Tim Rogers also took some of the blame for the Pioneers’ success on the ground.

“My defensive game plan was not great,” Rogers said. “I could have put our kids in a better position to be successful. Our players made big plays when they needed to.”

Hunter and the FHC offense couldn’t get anything going on the ensuing possession, but junior kicker and punter Luke Gustafson came up big once again, just like he has all season. From the FHC 45-yard line, Luke lofted his punt inside the EGR 20 before bouncing to the 11-yard line.

The running back tandem for EGR continued to generate success, but after a penalty and few stops, the Rangers took back over from their own 32-yard line. Unfortunately for the Rangers, there was minimal success from the offense this time around, and Luke was forced to come out and punt again. From the FHC 25, Luke boomed his punt inside the EGR 20-yard line, where the ball continued to bounce before it was downed by Benny at the Pioneer 8-yard line.

The FHC defense got back to its dominant ways, giving up only one yard of offense on the possession. Punting from their own 9-yard line, the snap to EGR’s punter was over his head, but after a heads-up play, he avoided the safety. The Rangers took over, getting the ball at the Pioneer 9-yard line with 1:12 to play in the half.

A couple of quick runs saw the Rangers come up short of the endzone, but Luke came up big once again. From a tough angle on the right hash, Luke knocked in the 20-yard field goal for a 10-6 lead at the half.

From the beginning of the second half, the Rangers brought more energy to the game than they had at the end of the half. With increased capacity limits and a student section, the atmosphere in the stadium was completely different, and it felt as if there were some sense of normalcy, despite the socially-distanced section,

“The student section made a huge difference, especially for Senior Night,” Carson said. “Being able to see my classmates gave everyone a reason to play: to play for your school.” 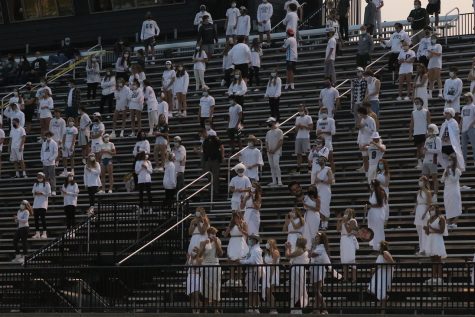 Rogers agreed, noting how surprised he was in the difference of the atmosphere.

“The student section and larger crowd made it a great environment,” Rogers said. “You don’t realize how important that is until it’s gone.”

Junior Nathan Sarjeant returned the kickoff to the 41-yard line after receiving the ball on the FHC 2-yard line, putting the Ranger offense in a good position to open the half. Unfortunately for the Rangers, as Hunter dropped back in the pocket soon after, he was very quickly hit as he attempted to hit junior Jacob Bonnett through the air. His throw was certainly impacted by the hit, but the interception made by Milanowski for EGR was impressive nonetheless.

From there, the Pioneers went on an 8 minute, 70-yard drive that led to a field goal after the snap was fumbled on third down. The field goal was just good from 23 yards, reducing the FHC lead to 10-9 with 2:05 to play in the third quarter.

After a few stops from each team, the EGR offense was driving down the field thanks to some penalties and its dominant rushing offense. Milanowski continued to get first down after first down, but a miscue led to a turnover. On a messy handoff, Milanowski barely had control of the ball before dropping it, leaving junior Tyler Weaver to recover the football.

With more than three minutes to play, Hunter took run after run under center to try and waste some clock. On 3rd and 8 on the FHC 48 with 2:53 to go, Hunter made his biggest play of the game. Thanks to some good blocking from Will and senior Alec Gast, Hunter found a massive hole in the middle of the field before darting left for a 33-yard run.

From the EGR 15-yard line, Joey took an 8-yard carry to the 7-yard line, setting up Hunter for a run down the middle into the endzone with 1:24 to play, giving FHC a 17-9 advantage.

After a lengthy yet quick return from Milanowski, the Pioneers needed 59 yards and a two-point conversion to tie the game with just 1:17 left to go. Burns completed the first play for a first down through the air to Aidan Stadel. However, with EGR having to go to the passing game, things didn’t go well. On the very next play, Mason and Will got pressure on Burns early on, tackling him for a loss; not only did they take him down, but Mason also stripped the ball out of Burns’ hand in the process, clinching the game with a 17-9 victory. 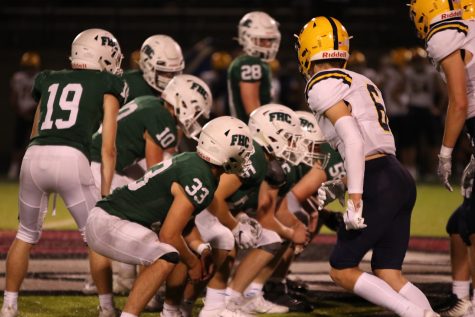 This win meant a lot to everyone on the team in a rivalry that’s been instilled in the hearts of all FHC athletes since they were young.

“It means so much to beat EGR,” Dallas said. “It’s a rivalry game, and a lot of us know each other, so winning means much more than other games.”

Not only was it a meaningful game due to the rivalry, but it was also significant to get a victory on Senior Night and celebrate the guys like Carson that have put in so much work in their time playing for FHC.

“[The program] has meant everything to me. There’s not a day that I don’t enjoy spending time with these players, especially the seniors,” Carson said. “I’ve learned countless lessons about life that will be carried out in my later years of life.”

With the rivalry win over East Grand Rapids, the Rangers move to 3-1 on the season. They travel to Northview to take on the Wildcats this week before closing out the season against Lowell at Northview as well. Rogers was excited and encouraged by Friday’s performance, noting the high potential of this team.

“When we are disciplined and play hard with great technique, we can play with anyone,” Rogers said.

Despite the early success, the boys and the coaching staff are challenging themselves to get better day in and day out.

“Heading into the final two games, we need to tighten up on all aspects,” Dallas said. “Special teams, passing, running, and tackling all need to improve.”