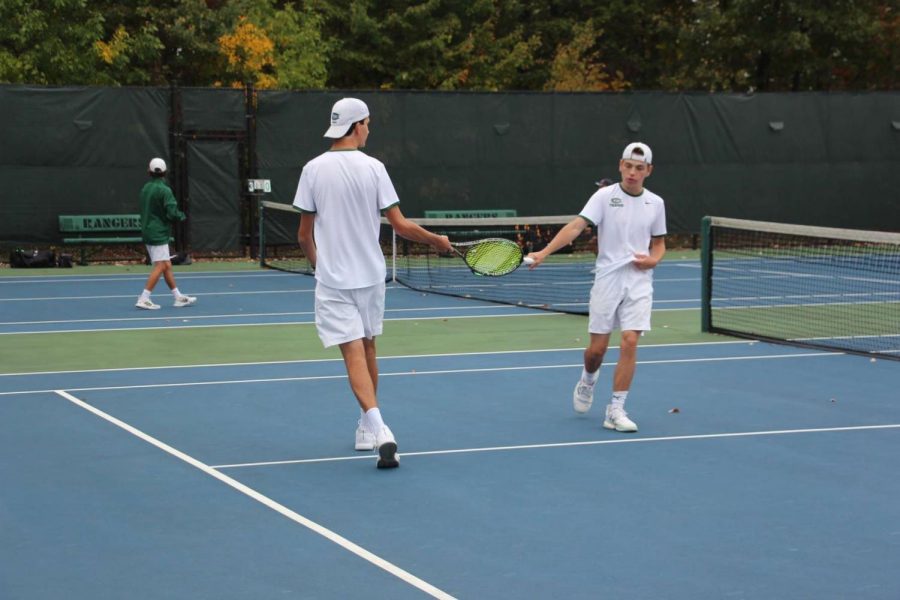 The season for boys JV tennis this year was different from any other. Covid-19 has impacted the year 2020 for everyone. This pandemic has been canceling school, closing down shops, and quarantining people from their daily lives. The boys had to work around this hardship this season in an attempt to put together a season as regular as possible. Knowing that schools would contract the virus and cancel the planned games, this was a daunting task. The boys completed the 2020 season with a 4-2-1 winning record, even coming in second place at the Portage Central quad and winning the Mona Shores quad.

“Given COVID-19 making things challenging, I think the season went great. We had some tough matches, but overall, we fought well and practiced hard,” head coach Mitch Timyan said. “I would have liked to have more tournaments for our kids to get experience playing in, but the duels we had were difficult matches that demanded a high level of play, and as a coach, that’s all I can ask for. The boys delivered with a solid record and a tournament win.”

The first match of the year was played against East Kentwood at home. The Rangers won 9-2, starting off extremely strong in the season, hoping to boost the boys in two days to take on the Portage Central quad. In the championship game against Mattawan, the Rangers finished the quad in second place, falling just short.

The boys bounced back in their next quad which was held at Mona Shores High School. The Rangers played exceptionally well, claiming first place in the tournament. They then faced off against Forest Hills Northern away at the Huskies’ home courts. The Rangers ended up tying the Huskies, hoping to get revenge on them in their final game of the season.

The next match was at FHC’s home courts against Lowell High School. The boys won 8-2 in that matchup with freshman Alex Chen and junior Alex Schenk competing extremely well, giving the Rangers the energy needed to win the match. The Rangers kept the win streak going as they won their next match with a close score of 5-3 against Grand Rapids Christian. Sophomores Max Cooper and Kyler Pell played very strong that day, giving the Rangers the edge to beat GRC.

“Max is a brick wall who gives everything back and workes insanely hard,” Timyan said. “Kyler is an amazing player and a great addition to the team.”

The Rangers then faced off against the dreaded East Grand Rapids Pioneers, and the boys knew it was going to be the toughest matchup of the year. The Rangers ended up losing the tough match with a frustrating score of 6-2. Although the boys lost, juniors Liam Sweetman, Noah Moore, Florenc Loewen, and sophomore Erik Hansen all had exceptional matches that day, making up both the Rangers’ wins.

“He was the comedian of the team, always bringing the teams’ spirits up when they were down,” coach Timyan said when asked about Erik Hansen, also adding that he was an “animal” at the net.

The second to last matchup was against Byron Center high school at their home courts, whom the Rangers beat with ease. The final score was 6-1. The highlight of the match came from freshmen Brady Miller and Alex Chen, who fell short in the first set who then battled back to win the point in the next two sets. Timyan’s insight on the two young star players is nothing but positivity. He says Brady and Alex both made huge improvements as the season progressed, who then became two of the best players on the team.

The last game of the season came from rival school Forest Hills Northern. The Rangers hoped to get revenge on the Huskies after previously tying with them in their second match of the season. The boys came out strong, but couldn’t string together a win to finish off the year. Frustrating as it may be, this gives the Rangers the fire that they need to want to work hard in the offseason, and to hopefully come back next year stronger than before.