Jena Detweiler cherishes band and the carefree community it provides 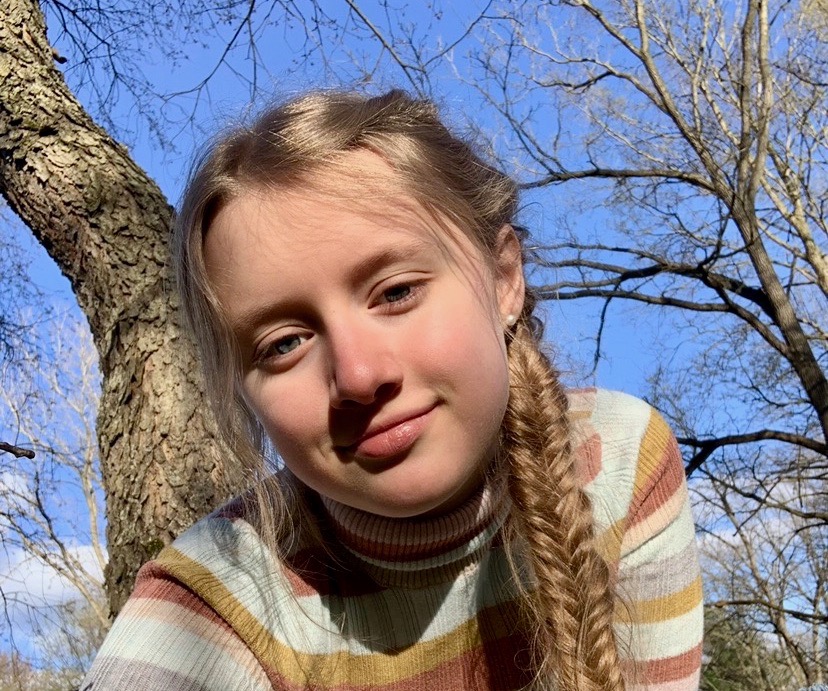 At five years old, junior Jena Detweiler was surrounded by music. Quickly moving on from bright red, flashing, and plastic toy instruments, she found herself in the midst of the brass giants played by professionals thanks to her mother, a band director.

“[She] introduced me to the whole thing,” said Jena, commenting on her start in music. “I was playing [and] trying out instruments when I was probably five or something. After we’d sometimes visit her at her job, we’d go around and try all the instruments.”

From these post-work hangouts at her mom’s job, Jena began to dabble in instruments. She was exposed to the variety of them within the band, ranging from saxophones to trombones to trumpets.

Stemming from this exposure, she was able to try them out before the mandatory instrument selection in sixth grade at Central Woodlands. Despite believing that she “played pretty well” on the trumpet when making her choice at school for an instrument, Jena decided on the clarinet.

“I quickly scratched out the trumpet because I realized I wasn’t actually very good at it,” Jena said. “Then, I was going to play the cello, which like literally everyone was doing, or I was going to do clarinet. I decided [on] the clarinet I think just because it was band and not orchestra, and I wanted to do band.”

Since this choice in sixth grade, the clarinet has maintained a steady—and rather integral—part of Jena’s life; calling it “a constant,” she has continued since then with band and landed in the audition-based Wind Ensemble class.

Band essentially became her “thing.” Unlike in sixth grade when she claimed to just be doing it to do it, she began to work more towards being one of the best clarinet players, earning solos and becoming a co-section leader.

And it all snowballed from a chair placement test.

“[In] seventh grade, we got chairs,” Jena said, “and I wanted to be first chair. Then, I actually started trying. It’s like the one thing [I do the most], so I have to be the best at it. If I’m going to have any pride, it’s going to be from that. I feel like you need something that you can be proud of.”

Now in Wind Ensemble, she is proud of her hard work. While her start with music might have been by chance—not everyone is trying instruments at such a young age—Jena continues to improve through hard work and weekly lessons with someone she has come to view as a close mentor.

“[My lesson teacher] is—not a friend because she’s an adult—like a friend,” said Jena, whose teacher is a first chair for the Grand Rapids Symphony. “Sometimes we spend the first 10 minutes—it’s only [a] 45-minute [lesson]—just talking about random things since I’ve had her [as a teacher] for so long. She’s great.”

With this mentor and self-driven work ethic, Jena has never fallen out with band. Over the past six years, she has put in this work not only for leadership opportunities and chair placement but also for the community she has found within the FHC band program.

Her instrument’s community may be small—there are just three clarinet players including herself in Wind Ensemble which entails just a three-person Secret Santa—but to her, they are undeniably close, especially factoring in how few clarinets there are.

“I think it’s fun [in band],” Jena said. “I like it a lot actually. Right now, we’re pretty unified because there’s only like three [clarinets]. It’s me and two other people. That’s all that’s in my band; in the other band there’s like four more or something, but it’s not a lot. We’re going to do Secret Santa with three people.”

And with this unification, band has always been a place that Jena can stop worrying despite the hard work and practice it entails. It’s a community full of laughs and acceptance—someplace Jena can appreciate the “slap-happy” days, frivolous mistakes, and a variety of people she can be close with.

“I feel like in that class you just kind of laugh every time you do something wrong,” Jena said. “Honestly, [there’s] not that much [judgment]. I feel like there are people from like literally every group of people; there are people [from] all over the board in it—it’s not like the stereotype.”