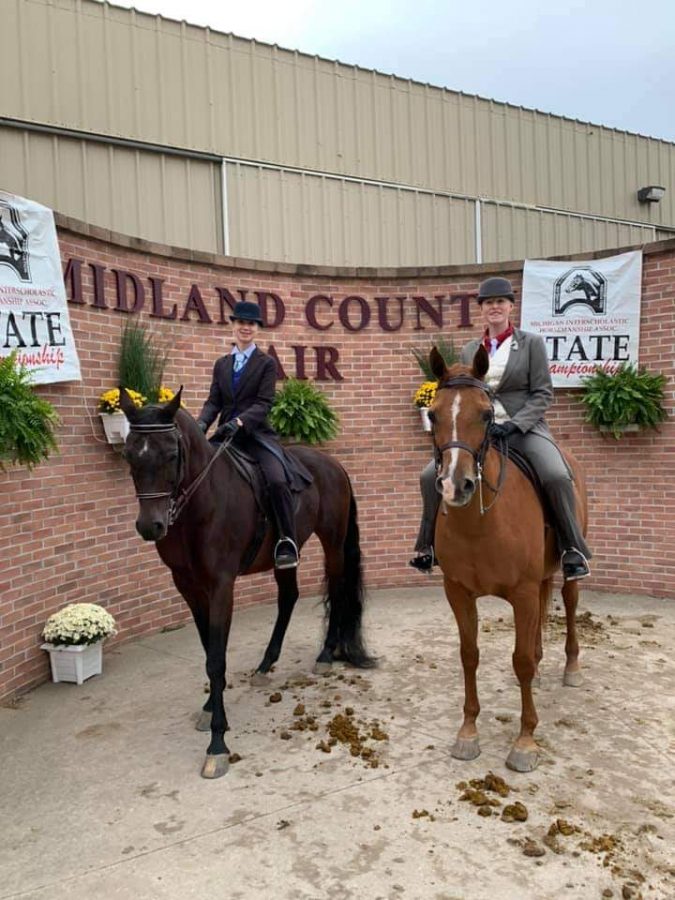 The pinnacle of success in the world of sports is the opportunity to compete for a championship; opportunities like these arise from success as a whole. The FHC Equestrian team embodied this premise when they arrived at The Midland Fairgrounds on Thursday as state title contenders and left on Sunday as a top five team in the state of Michigan behind powerhouses like Meridian and Goodrich. Their head coach, Stacie Berendsbode, described their performance at states by explicating the following: “We were very excited to finish top 5 in the state for the C division.” She then went on to praise the lady rough riders by saying “The girls worked very hard.”

Individually speaking, junior Claire Richardson breathed in the pressure that comes along with state championship appearances and exhaled it out as if it was just another day at the Fairgrounds. Claire ended her triumphant junior year in a fashion only champions know how to do.

“Claire [Richardson] won several 1st places in her saddleseat classes and one in hunt seat as well,” coach Berendsbode said.

Along with Claire, sophomore Abby Satterthwaite placed first and second in jumping, which was a totally foreign event for her horse this year. In fact, the estimated amount of time to train a horse to jump was measured around a two month period of excruciating training, so Abby’s elite performance dictated the sheer amount of training that she and other riders had to go through to reach this apex of riding.

The senior rider at the helm of the FHC Equestrian team, Alaina Briggs, secured her monumental last points in three separate styles of riding. Throughout the grind of the season, Alaina took her title of team captain and rode with it through the finish line. Between her wherewithal as a leader to organize all of the younger riders and her mentorship capabilities, Alaina’s legacy as the 2020 stallion squad senior leader will continue to exist for years and years to come.

“Alaina was the best leader our team could’ve asked for,” Berendsbode said.

In comparison to a seventh place finish last year, the lady rough riders revised the history books and accomplished a significantly higher fifth overall standing among the best of the best in the state. In the end, the growth outweighs the proficiency.