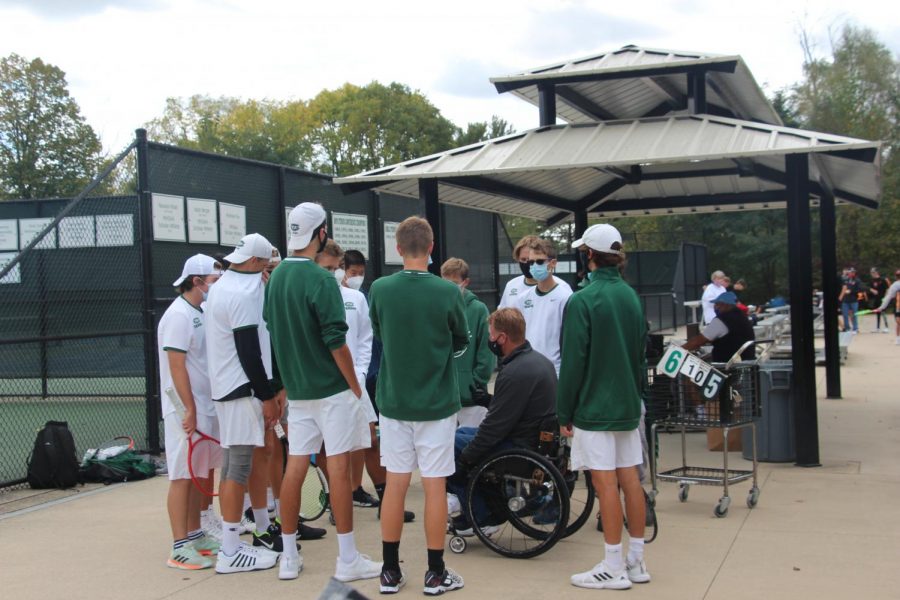 Last Thursday, the boys varsity tennis team traveled to Midland Dow for the Division 2 state tournament. After working hard all season, winning regionals, and placing second at conference, the team was ready to show off their skills at the competition.

Going into the tournament seeded third, the boys had an easy first match against Gibraltar Carlson. Each player won their match, sweeping the Marauders 8-0. Moving onto the quarterfinals, the boys faced off against Midland Dow, the tournament’s host. The Rangers have competed against Dow multiple times this season, so they knew what to expect. Winning by a slim score of 5-3, the Rangers knocked out the Chargers and advanced to the semifinals.

On Friday, there were only four teams left: FHC, Seaholm, Forest Hills Northern, and Mattawan. The Rangers took on Mattawan while Seaholm and Northern battled it out. Although the Rangers had played and beat Mattawan in previous matches, the Mattawan players had an astonishing day. The final score of the match went 6-2, with Mattawan coming out on top. Four singles player freshman Nico Notarnicola was the only singles player to win his match, going 6-3 and 6-2.

The one doubles team of senior Chris Battiste and junior Cully Herbert also had a great match. Being the only doubles team to win, the boys still had a close match. Going 7-5 in the first set, the duo was determined to win and went 6-3 in the second set. Chris ended his tennis career on a great note.

Two singles player Jeremy James had a close match against the Wildcats. Starting off strong, Jeremy won his first set 7-5. The second set was close but went to Mattawan with a score of 6-4. Then came the third set, which Mattawan won as well, 6-2.

“I’m proud of the boys,” said head coach Dan Bolhouse when asked about how the boys played. “They all fought very hard for every point”.

Unfortunately after losing to Mattwan, the season was over for the team. Rival Forest Hills Northern ended up winning states, and the Rangers tied with Seaholm for third place.