A brief commentary on the world of fanfiction 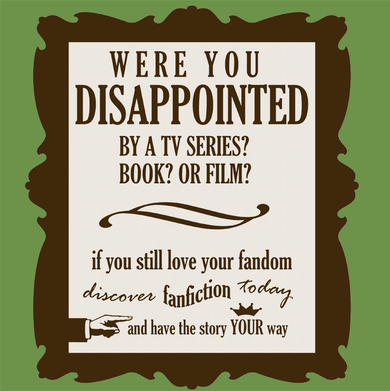 Some nights I fall asleep to the monotonous droning of the day’s Supreme Court hearings, playing from my phone beside me. Others, I fall asleep with my phone clasped in my hand, thumb intermittently swiping across the screen, perusing Tumblr.

One of those things seems okay to tell people; I have no apprehensions discussing Amy Coney Barrett’s Supreme Court hearings, although that’s a conversation for another time. But discussing Tumblr—and more specifically, fanfiction—seems nearly shameful.

I’ve seen the subtle ways people’s faces shift when I mention that I read fanfiction. I’ve witnessed awkward laughter, unsure pauses, all of the signs and quirks that revolve around a guilty pleasure.

For some reason, by Fate’s roll of the dice, that’s what fanfiction is: a guilty pleasure.

It’s a joke that anybody outside the fandom world loves to make—a hobby that, while not necessarily culturally unacceptable, doesn’t fall into line with expected normalcy. Writing fanfiction goes even beyond that in terms of almost shameful activities. Truthfully, to openly be in a fandom of any kind doesn’t fit the status quo.

But “weird” aside, fandom communities have become my home since middle school. I was never the most involved member, and I still had an active social life outside, but I would often retreat into that world—a world of stories and new realities and people who were just as passionate as me.

That was the shining star of fandoms for me; I throw myself so deeply into everything I do, and the movies, books, and tv shows I watched were no exception. Discovering that community of equally passionate creators helped me to not feel so alone.

Fandoms also gave me an outlet, a way to satisfy my cravings for more of whatever connection I had created to the characters in stories. And they were a field of imagination, a space where anything could be true as long as everyone believed enough.

The representation within fanfiction has largely shaped my beliefs and my advocacy for marginalized communities. I specifically indulge in fantasy series which tend to be lacking in representation–most media is. But fanfiction authors have been able to shape the narrative for these characters and changed the collective opinion.

This phenomenon is enormously apparent in the Harry Potter fandom. A nearly unanimous distaste for its creator who weaved offensive plot points into her work and used her acquired fame to further marginalize the transgender community was the impetus for a rebellious community. They created their own version of her work, one that boasted justice and equality.

In these thriving communities, like the Harry Potter fandom, fans have bestowed success upon worthy authors, those who have introduced lovable original characters, alluring alternate universes, and novel plot threads. Entire fan bases have sprouted up from the work of these adept and prolific creators: fan art, headcanons, merch, and even secondary fanfictions.

And beyond even that, fanfiction has been both a jumping off point and a talent-refining exercise for several esteemed authors who have published their own original works; Rainbow Rowell, Cassandra Clare, Marissa Meyer, and even Neil Gaiman fall under that umbrella.

The quality of the writing doesn’t deteriorate simply because it’s based on already existing creations. Even if fanfic authors never share work outside of their chosen community, some possess an exceptional gift, capable of cultivating poignant feelings and mesmerizing prose.

Fanfiction has humbly presented us with the following lines:

“Silver eyes that had long since turned to ash stared at [him] with such longing sorrow and [he] felt his heart break. Even though he was damaged, possibly beyond repair, he was still the most beautiful thing [he] had ever seen” (@xo_marauders on AO3).

“They’ve been together for long enough now that the edge of their [love] had been dulled, no longer threaded with that frantic desperation, the feeling of the sky collapsing around them” (@ashes-and-ashes on Tumblr).

“There was no war going on behind him. Instead, there was Remus. Remus with his eyes flashing through so many different stages of pain and sadness that they looked like melting gold through the tears suddenly welling there” (@lumosinlove on Tumblr).

An entire universe exists within the fandom sphere, one that provides a place for creators to share their gifts and for readers to further revel in the afterglow of a riveting adventure, but the world remains hidden because its inhabitants fear shame or judgement.

Fanfiction doesn’t deserve to be a guilty pleasure; it deserves to be a recognized endeavor.

A product of passion.